Mum and I dyed some silk warps in October with Procion MX and I have used one warp (Blog Part 1 and Part 2) and have one left. This one is 2/20 Bombyx silk dyed Moss, Plum and what was supposed to be Steel Gray but turned out to be Navy blue. I dyed the silk in patches that were shaped in triangles because I wanted more movement between the colours of the warp, no straight lines across the warp. The weft is slubby singles silk also dyed Moss, it is on the outside of the circle of the warp in the picture below. 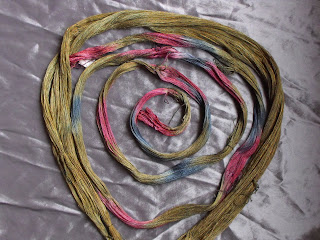 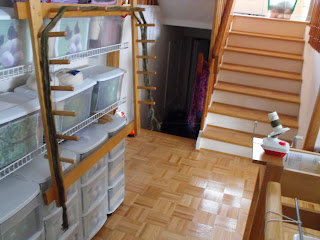 The weft is really pretty, lots of different shades of green and some browns even. It truly looks like moss. And I loaded a beautiful looking pirn that I just had to take a picture of because, well, it is rare that the pirn looks this good! 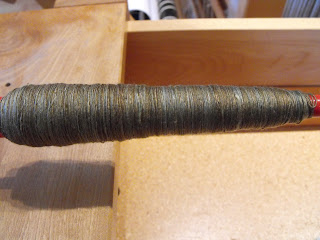 In the picture below the jagged warp painting can be seen. I really like Procion MX dye because the dyes are really well behaved, they stay where you put them so there is little to no bleeding therefore little to no muddying of the colours. 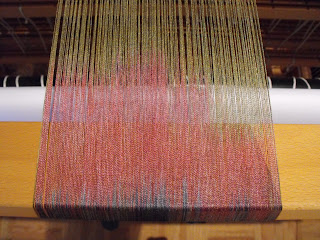 The pattern for the scarf is a snowflake twill. It is one that I designed myself because there isn’t a lot of 12 shaft patterns! Looking at the back of the loom you really can see the pattern appearing in the heddles. 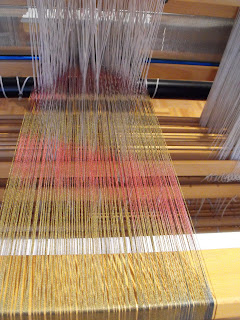 The snowflake is really pretty I like the big table in the centre, I just counted and there are 12 diamonds which I think is cool! There is a lot of texture to the pattern. 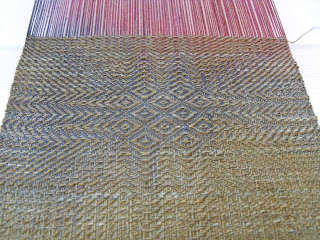 This is the first time that I have woven a snowflake twill and I can see why people love them. Watching the pattern appear with each pick thrown is really rewarding. Also the colours in the warp and how they are interacting with the snowflake is really fascinating.
Posted by Ngaire at 9:59 PM

What a gorgeous pattern, I can't wait to see the scarf finished with all those colour changes.

I think snowflake twills are my all time favourite! While the treadling is long, it eventually becomes 'burnt' into your memory and you tap dance along!

It is so beautiful! I love the colours.

Wow! I see some irridesence popping out in that pattern. It's going be a knock-out!!!

I am also very fond of snowflake patterns but this one is very very nice. I like the idea of the big snowflake in the centre.
You are right about not many 12 shaft drafts, you did well to design that one yourself !