The End of Diversified Plain Weave

I’ve started my third and final Fleur de Lis  runner and I must admit that I’m more than happy to see the end of this project.  I find that I can only weave for a very short time and then the fatigue of lifting 13 shafts on a treadle gets to me.   I can’t see myself choosing to weave such an unbalanced weave again, but I guess, never say never! 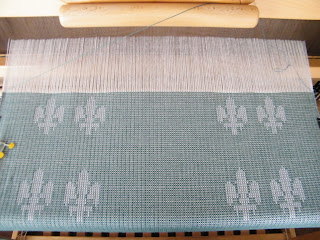 For this runner I am using a lot of what I learned in the previous two runners.  I am using the improved motif and the thinly woven hemline. 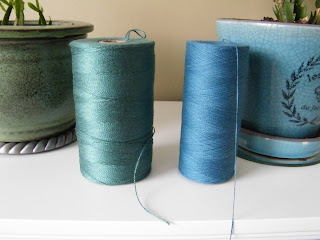 My yarns are 2/8 orlec in dark teal and 2/16 cotton in blue teal.  When I went to take the photo and sat them on the shelf beside the fireplace I instantly know where the colour inspiration came from. 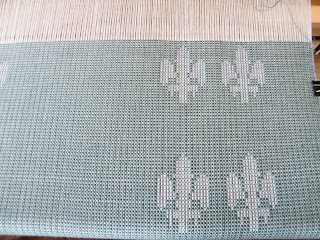 The plan for this runner is to weave 2 inches of hem in fine cotton only, to ensure it sits within the hem neatly.  Then to weave  2 inches for the underside covering hem and 4 inches of plan pattern before beginning the motif; hopefully this will allow the motif to begin away from where the runners drape over the table.  I am spacing my motif a full 2 inches apart on this runner.

I’m pretty happy with it so far and the colour is better than I had hoped, now only 50 more inches! 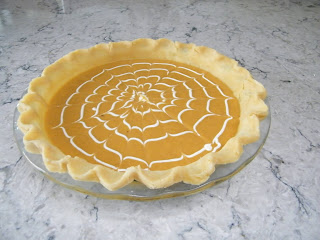 Yesterday I embraced autumn with my first seasonal pie.  I can’t call it Pumpkin Pie because I don’t actually use pumpkin and Butternut Pie doesn’t have the same ring to it; but, that’s exactly what it is....baked butternut squash makes a wonderful pie and I think has a much better texture and less bitterness than pumpkin.  My spider web was a bit messy, but oh so tasty! 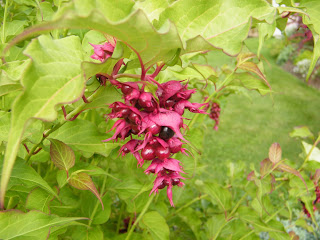 The garden shot for today is  Leycesteria formosa commonly called Himilayan Honeysuckle or Fowering Nutmeg.  This is an amazing plant that is in flower for most of the summer and keeps the pollinaters very, very happy.  Then in the fall it produces these beautiful berries in hanging clusters.  Surprisingly the fruit is edible and tastes a bit like chocolate and kind of like molasses. 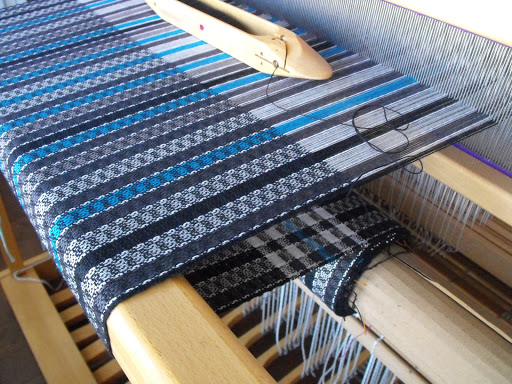 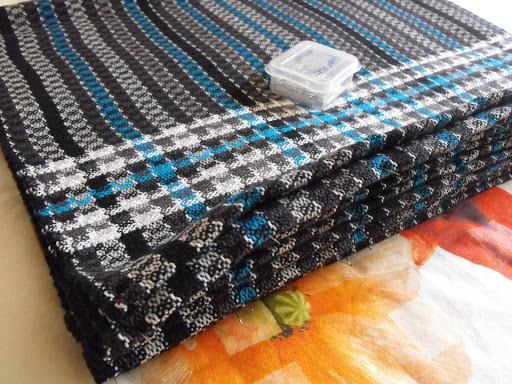 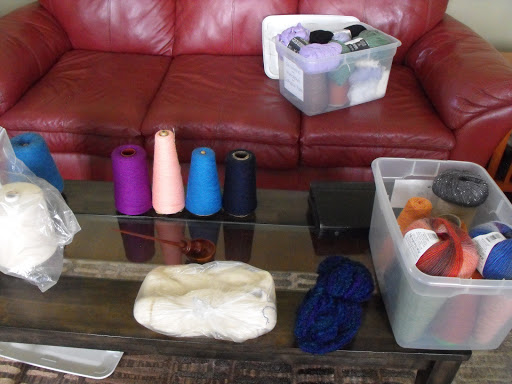 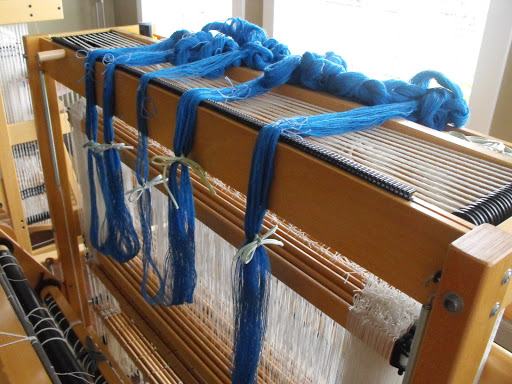 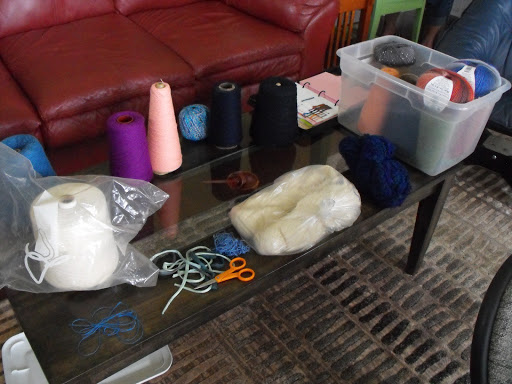 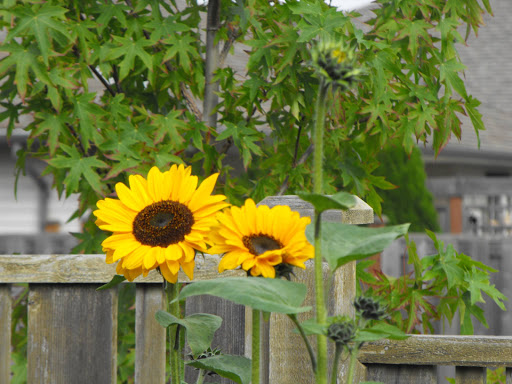 I’m still plugging along on the Diversified Fleur de Lis.  It is a very slow weave and I must admit that I am finding a multitude of reasons not to weave. 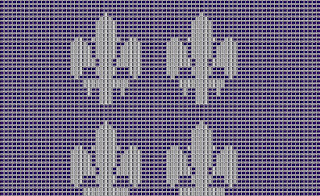 I am about half way through weaving runner number two and I have tried a couple of new things with this runner as well as the improved fleur de lis motif. 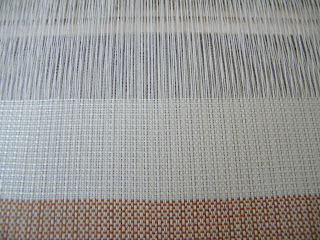 I was a tad worried that due to the thickness of the weave that the hem may not lay as flat as I would wish.  So I used 2/16 orlec in white ~ the same as the thin yarn in the warp ~ to weave the 2 inch hem in pattern that will be folded into the actual hemline.  It is substantially thinner and I think it will work well and be hidden within the fold. 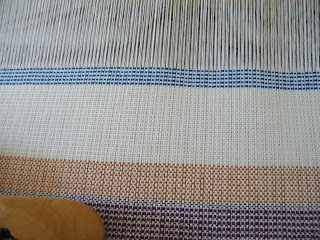 I originally planned to use a lovely pure blue 2/8 bamboo weft for runner number two.  This should make the fleur de lis motif brighter by swapping out the thin blue 2/16 yarn for the same thin white yarn I used in the warp.  Well, it only took a handful of picks before I saw that it didn’t work, I got a spotty ‘dits and dots’ look.  I also had huge issues with the bamboo weft.  This bamboo yarn was first generation bamboo and it was almost round rather than oval and very tightly twisted, this made the selvedges horrible, so out it came.

Here is where I really appreciated my ‘improved’ stretchers.  I have pretty much given up on the use of temples, they often feel too heavy for the woven web and frankly are a bit cumbersome to move. 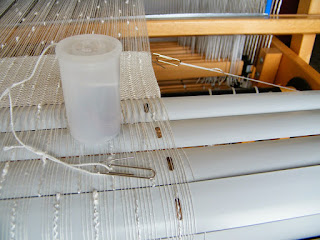 I moved to this type of home made paper clip stretcher and it has worked well, although it does have a propensity to pull little distortions in the web. 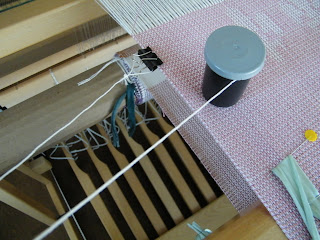 I have swapped the paper clip for these small bulldogs and it was a real ‘hallelujah’ moment.  Because I have increased the size on the contact with the web I have been able to add more weight to the stretcher, so it is a lovely improvement. 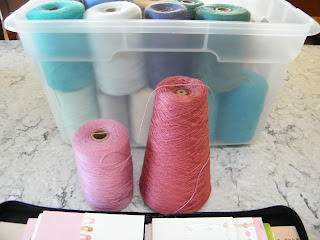 I had a good think about weft yarn, and since my intention was to weave a longer runner for myself I chose these two, lets face it pink can be quite divisive, it’s not to everyone's taste. The thick yarn is rose 2/8 orlec and the thin yarn is 2/16 dark rose mercerized cotton.  These two combine beautifully, but photograph poorly. 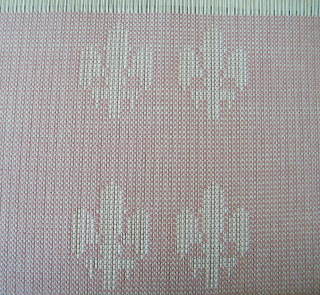 The actual fleur de lis is much more subtle on this runner and has proven quite difficult to capture on camera.  In person it is still very subtle, but much clearer.

Part of the problem with photography during the past four days has been the smoke from the west coast fires in the USA. 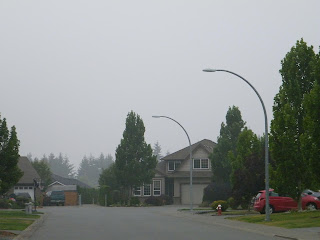 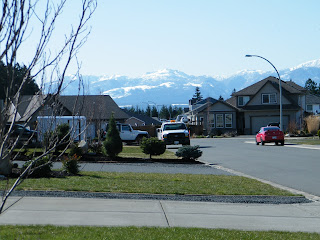 We have been completely blanketed and under inhalation warnings, so staying inside whenever possible.  We are still the lucky ones in this horrendous event and our hearts go out to those who are closer and more directly effected by the devastation the fires have caused. 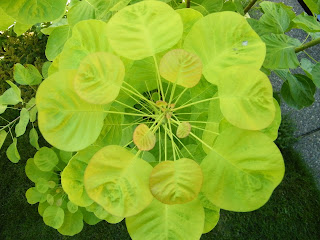 Ngaire took this photo last week while we were basking in our summer 2.0.  This is a pretty wonderful shot of  Cotinus Coggygria ‘Golden Sprite’ or Golden Smoke Tree from above.  Mother Nature sure knows how to make thing beautiful!