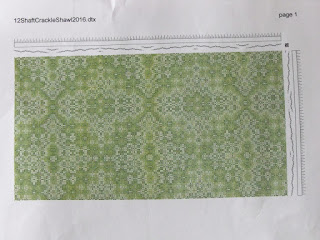 The warp is 2/30 cotton, I went with a fine warp so that I could get more pattern repeats across the shawl to give it balance.  There are 852 threads, and I of course made a threading error!  I had about 50 threads left but I had run out of heddles on shaft 4.  I had help from Mum, she sat at the computer marking off the threads as I called out the threading sequence looking for the mistake.  It was at near the end, thankfully.  The picture is of the 2/30 cotton and below it is cotton sewing thread, not much difference. 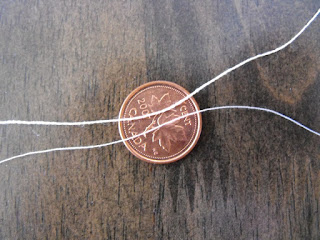 The weft for the first shawl is black Tencel in 2/10.  After weaving 4 inches I stepped back to take a photo and I realized that the pattern I am weaving and the pattern on the draft isn’t the same!

I had forgotten that I tied up my treadles backwards (left to right instead of right to left) by mistake. I had intended to fix the treadling sequence before I started weaving, but I forgot in my anticipation to get weaving!  So, back to the computer and with a bit of fiddling I changed the tie up and found that I liked the new pattern configuration just as much, so I could keep weaving, thank goodness. 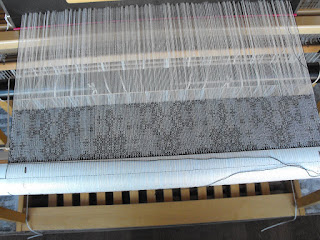 Disaster averted, I continued weaving for another 1 ½ inches and that was when I noticed an area that looked like a double pick.  It runs in both the warp and weft and is in six places in the pattern.  I looked at my draft and saw that I hadn’t completed an entire crackle block; I was missing a single thread six times.  I remember when I was threading that I thought it was weird how the threading sequence went but I didn’t follow my gut and check it out: lesson learned. 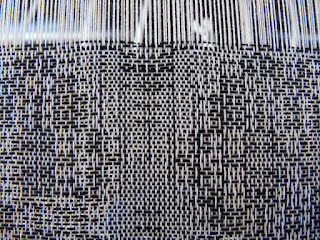 I have to un-weave the 5 ½ inches, unpick the hemstitching, untie from the cloth beam and pull out from the reed so I can add the extra 6 threads, which sucks!  I have to make extra heddles to add to the harness which I have never done before.  I looked at our Tips and Tutorials section to see how it is done, but we don’t have information posted!  My next post is going to be about how to make and tie on extra heddle!

Final Garden Shot is Heather with the first of the January blooms.  I took the photo this morning after we had a heavy frost. 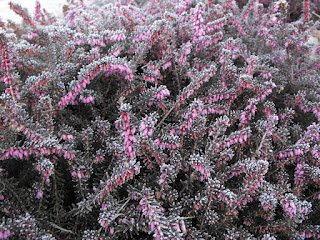 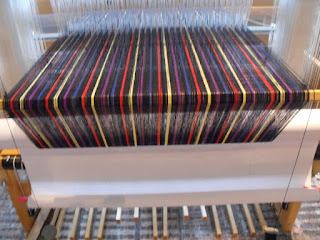 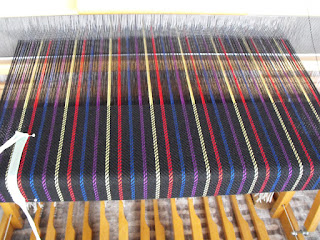 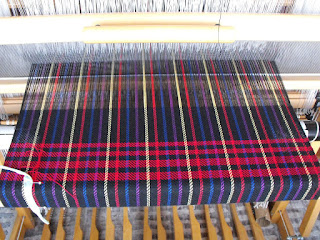 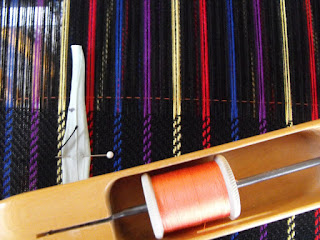 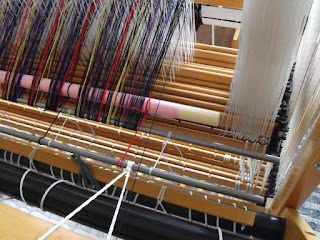 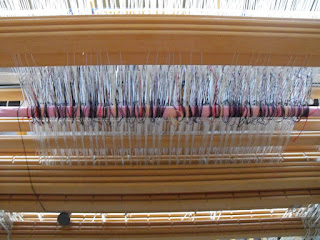 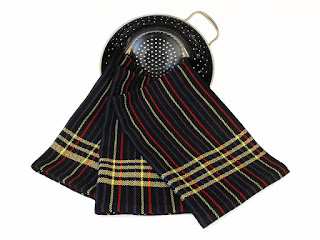 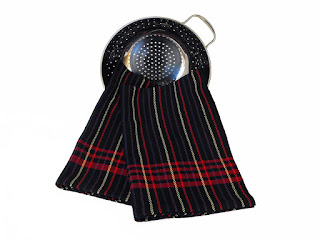 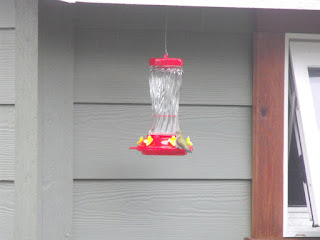 Posted by Ngaire at 1:30 PM No comments: 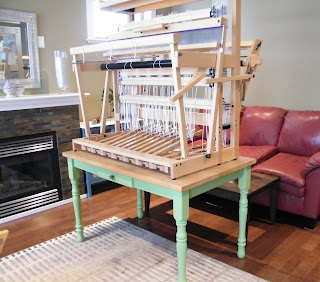 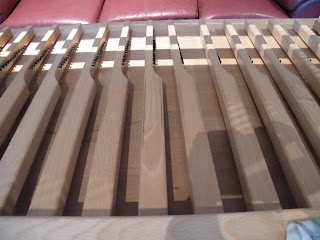 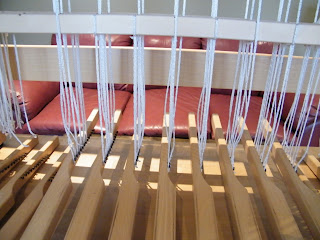 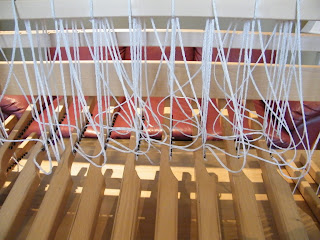 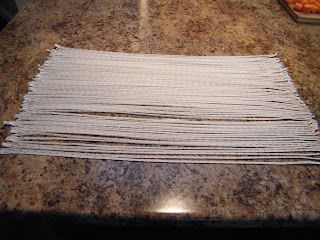 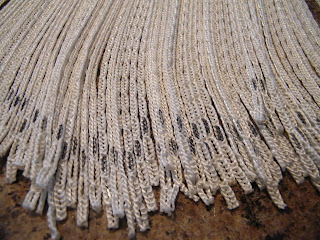 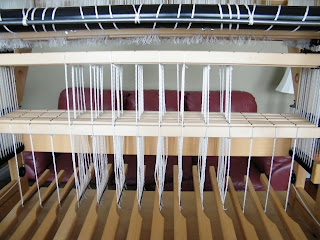 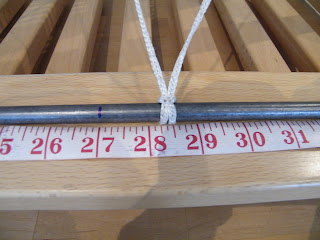 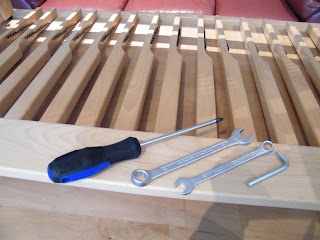 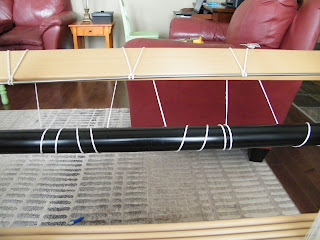 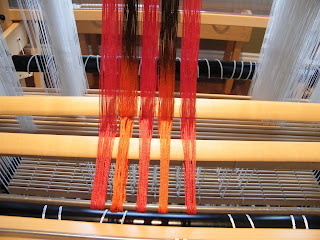 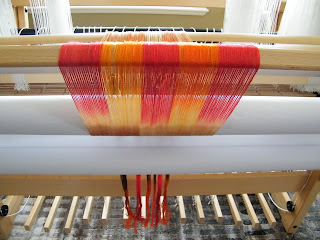 On Mum’s loom is a 2/8 cotton tea towel warp.  It is a striped warp in shades of green, purple and blue.  The pattern is Crackle and the weft is green, she has used some other colours but I’ll let her tell you more later. 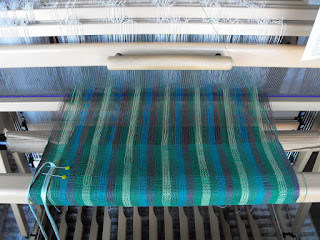 On my loom is a 2/30 cotton shawl warp.  It is almost 900 threads in the warp and a lovely cream colour.  The pattern is also Crackle and the weft is black 2/20 Tencel, I’ll be telling you more later. 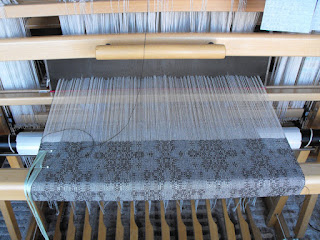 These are both projects for our Study Group with the Qualicum Weavers, hopefully they will be done before the next meeting on the 19th! 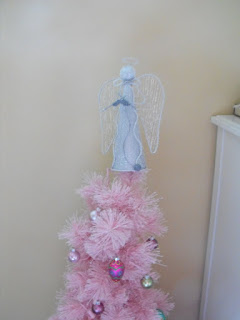 The final picture is of my knitting angel that I made in May sitting on top of my pink Christmas tree.  Adorable!
Posted by Ngaire at 3:58 PM 2 comments: