I wanted to wait until we had a sunny day to take photos of the two Crackle Weave Scarves that I wove earlier this month.  I waited and waited and....well, you get the picture.  We have had the dullest October I can remember and this week we are in store for what the meteorologists are calling ‘A remnant of a typhoon which has become a ‘Weather Bomb’! Yikes!

I turned on all the lights and stood by a window and was able to get these few photos and frankly they do not show the iridescence much.  Here are a few of the better beauty shots.

The first scarf I wove on the blue and turquoise warp was with a greyed teal weft.  This scarf is super subtle and gives off a faint lime green sheen in the light. 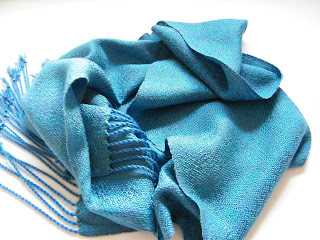 Unfortunatly the photo really hids the pattern which is lovely and shows up beautifully in real life. 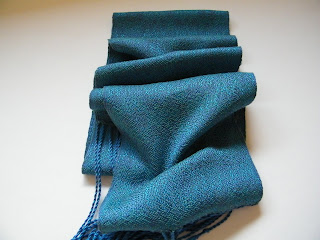 The second scarf that I wove on the same warp was with cayenne weft.  This scarf is much more iridescent and gleams red/purple and shows the pattern to much better advantage. 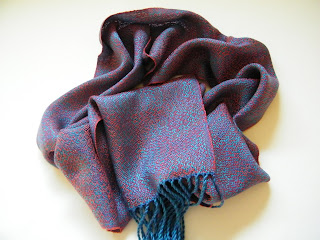 This is a really lovely pattern which has absolutely lovely selvedges, but to get them I had to weave with my bulldog stretchers and start my throws from the opposite edge than I normally would have.  It really pays to try out both ways before you commit to the weave. Now I get to ‘fess up’ and tell you I made a threading error that only another weaver would notice, but, both Ngaire and I get to add another scarf to our collections.

We have been baking our way through all the Great British Bake Off Technical Challenges, much to my husbands delight and these are from Season 12 ~ Jammy Biscuits or Jammy Dodgers as they are fondly called.  British recipes tend to make small batches and this recipe only made 12 sandwich cookies, the perfect amount.  The cloth is Shadow Weave. 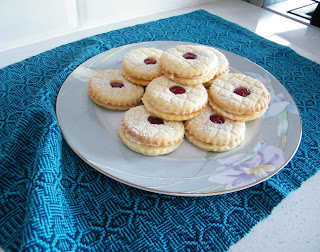 After the striped tea towels that I wove in June there was still some small cones of cottolin left so I decided to mke one more tea towel warp to finish the cones off.  I started with a draft that I had used last year that had ribbon like stripes thinking that it would be good in using up the all the colours. 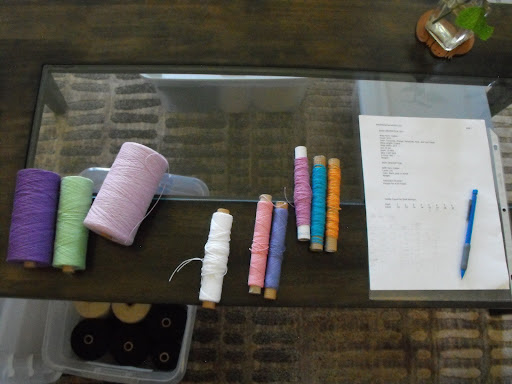 This was a time consuming draft to make because I measured each colour separately in order to have an accurate thread count, and then I wound the thread back onto the cone.  This ensured that I could accurately make the stripes for the draft on the computer.  And then I finally pulled the actual warp. 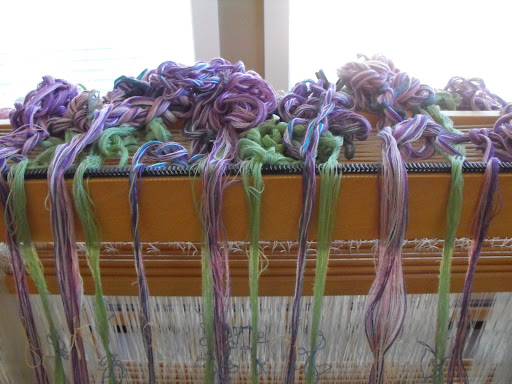 I managed to finish seven cones in the warp!  You may be wondering what is at the bottom of the photo, that is the loom waste from the previous set of tea towels, I need it because I am short a couple of threads for the warp, just three lime green threads short. 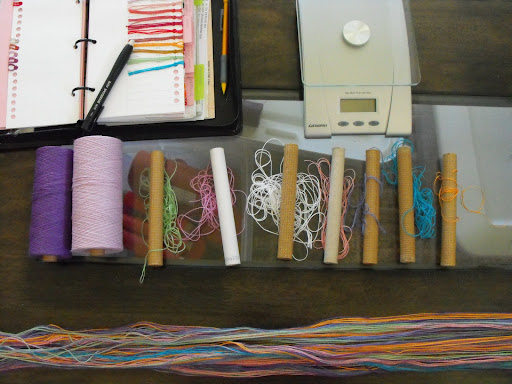 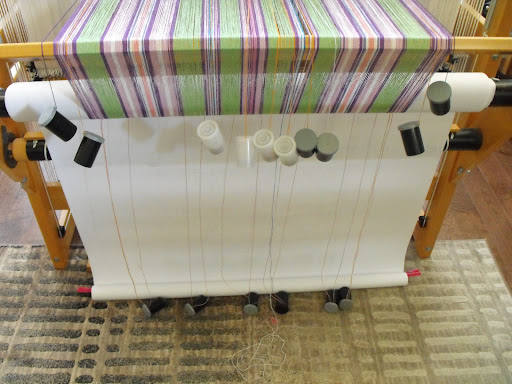 Next up is the auditioning for the weft colour, I tried out some pinks.  They were OK but pink can be hard to sell. 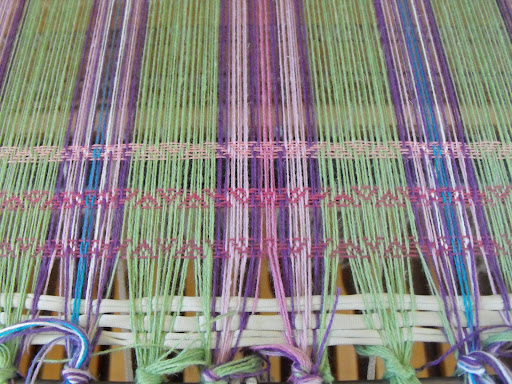 Next up was greens and the darker shades were OK but I didn’t think that they really worked with the pinks and purples in the stripes. 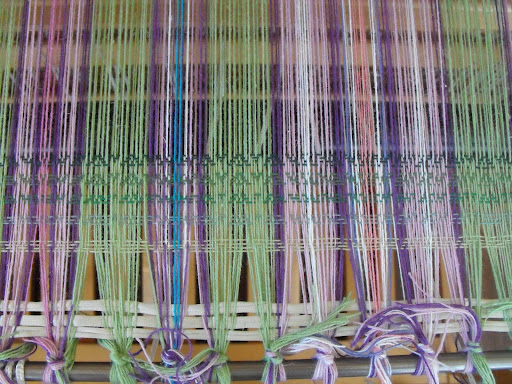 Then I tried white and dark purple, no more try outs needed the dark purple was the hands down winner. 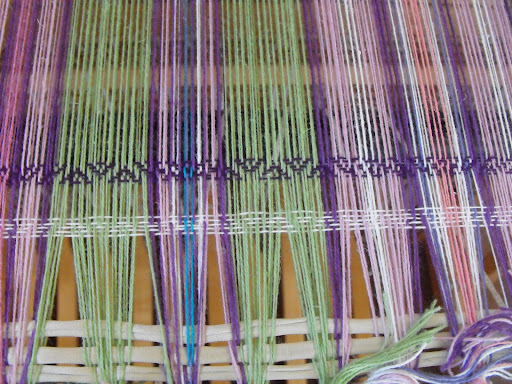 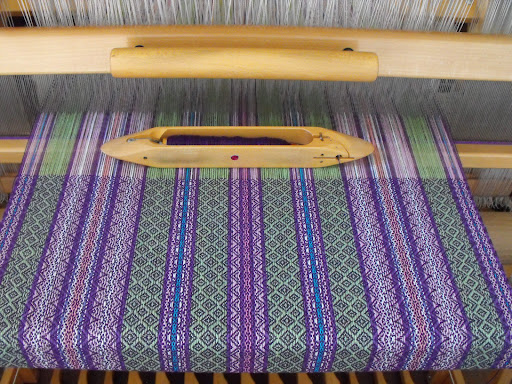 For the second set of two tea towels I again auditioned different colours of blue for the weft and went with a dark blue called denim. 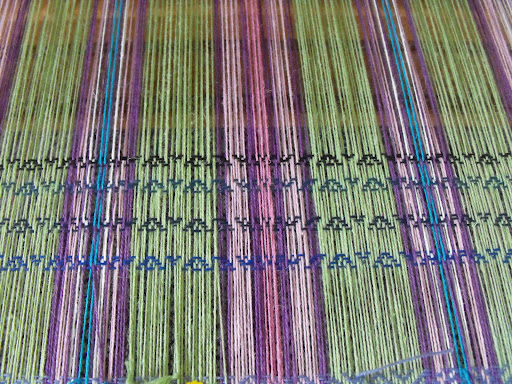 They are just as pretty as the first set of tea towels. 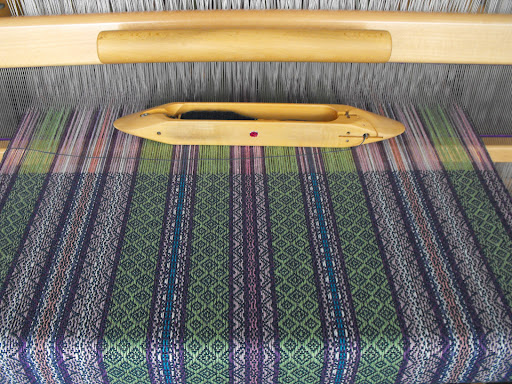 Weaving with cottolin is very dusty so I thought that I would show you some dust bunnies under my loom! 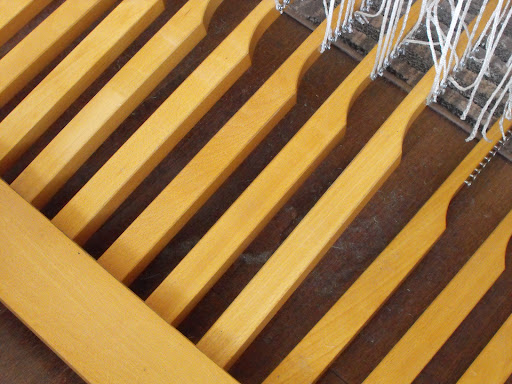 The tea towels are finished and are available on Esty.  Here are some of the beauty shots. 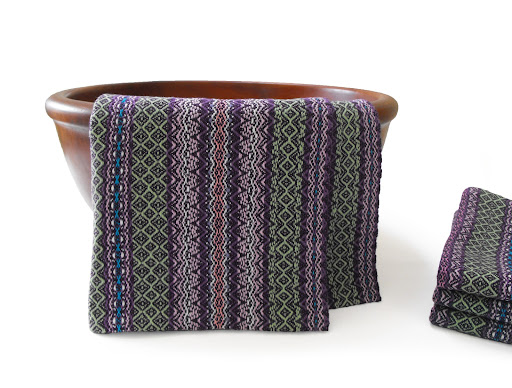 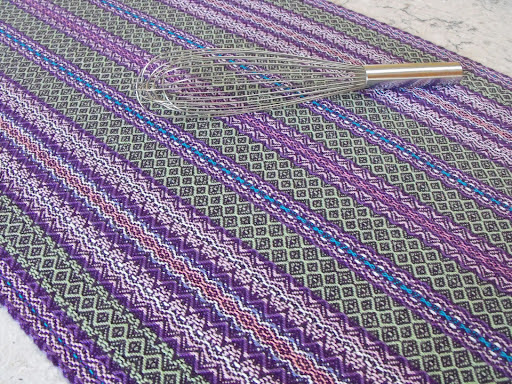 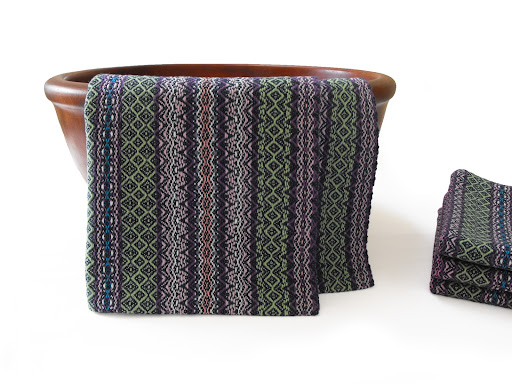 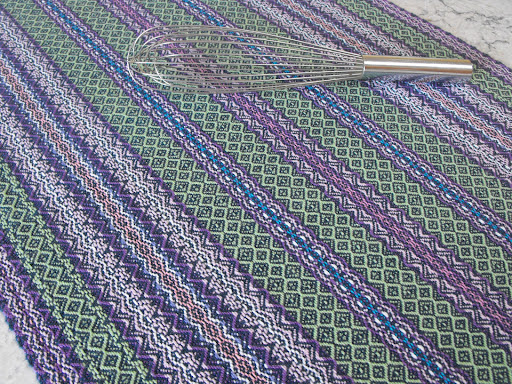 Final Garden Photo is Penstemon hartwegii 'Peptalk Cerise', the hot pink colour is amazing and it is one of the first plants to flower in the spring and it will continue flowering until the first hard frost.  The hummingbirds love it! 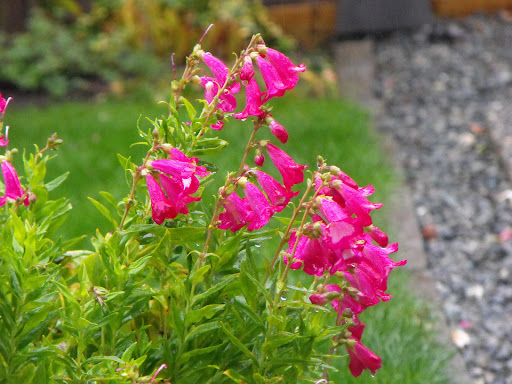