I had a hard time figuring out what to do for my project for the twenty fifth anniversary of the Qualicum Weavers and Spinners Guild.  The theme is glitz and the guild provided 20 grams of yarn.  Mum and I talked about ideas and we both wanted to do something different.  Mum came up with spool knitted necklace and I came up with doing a Christmas Tree Topper Angel. 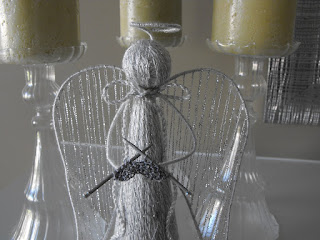 The idea came about because a lady from my old guild in the Okanagan makes Christmas angels by crochet but I can’t crochet so I had to come up with a different way.

Plan A – The idea was to weave a body on a paper yarn cone, that I covered in plastic wrap using weaving wool.  After weaving the body I was going to Modge Podge the body and then slip it off the paper cone.  I placed some nails around the bottom and top to hold the thread.  Well, the nails were too short and the threads didn’t hold.  So I scraped the idea. 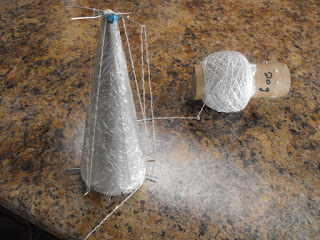 On to Plan B.  This one worked so here are the instructions.  I painted to the paper yarn cone silver. 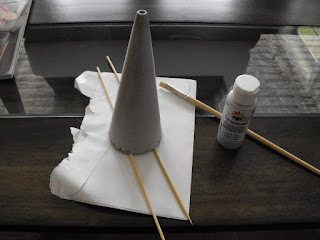 I covered the body with the glitz yarn using a looping technique with a latch hook. 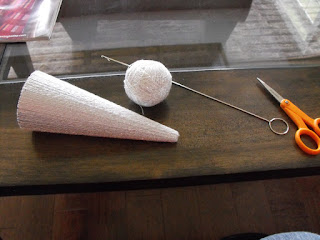 Push the latch hook up the centre of the cone.  Grabbing the thread in the hook and then pull it through the cone. 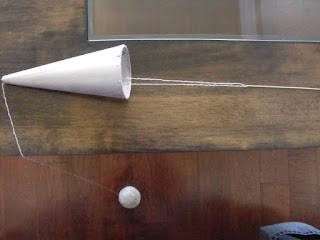 This creates a loop that you pass the ball of yarn through.  Then you snug up the loop tight to the cone. 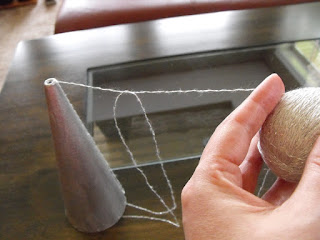 You do this all the way around the cone.  I had to stop when I couldn’t fit the latch hook through the centre hole anymore.  So, if your cone has a small opening at the top you may want to enlarge it so you can get better coverage on the body. 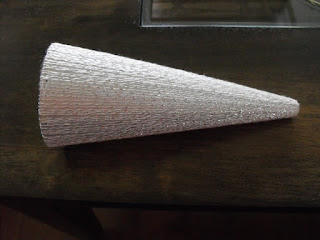 The next step; I wanted to add more sparkle to the body and I also wanted to cover up the holes that I had made from Plan A! 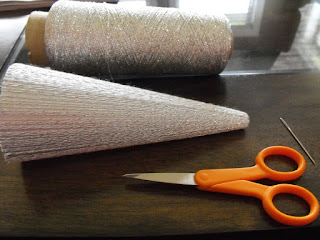 I needle wove a band of silver thread along the bottom of the body of the angel.  Just in case you wanted to know it was a 2/6 reclining twill.  And I did eleven bands around the base. 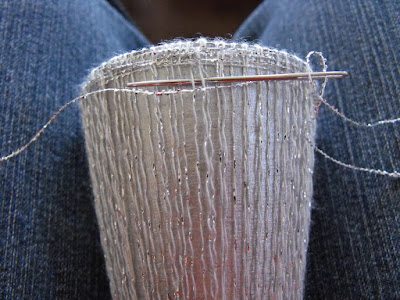 I then used Modge Podge, which is basically white glue, on the inside of the cone.  It holds the outside threads in place and also protects the threads from the eventual Christmas tree branches. 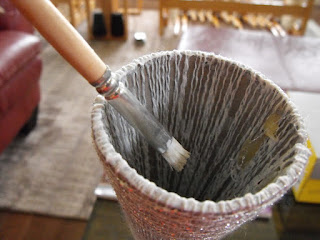 For the head I wrapped a one inch Styrofoam in the same thread as the body.  It just looks like a ball of yarn! 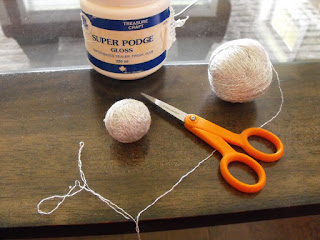 For the wings I auditioned a couple of shapes cut out from a piece of paper. 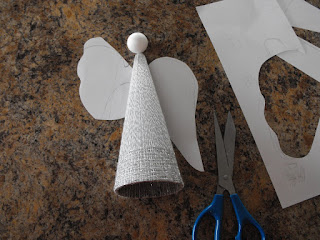 Then I used the winning wing design to make a template, it is a little hard to see because I used a pencil when I traced it.  Then, I used galvanized wire from the gardening section of the dollar store to bend into wings and the halo.  Doesn't the wings look like a tooth?! 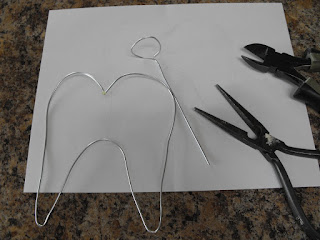 I used the same looping method from the body of the angel to cover the wings and the halo.  It took a surprisingly long time but it was something that can be done in front of the TV. 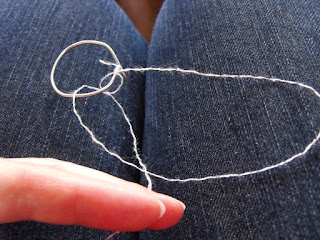 The wings needed to have more shine to them so I used silver thread.  I placed the silver thread on a sewing bobbin to keep things tidy and used the looping method from the body of the angel.  The wings were attached using hot glue to the body.  In the picture you can see the curve that was added to the wings so that they laid flat on the curved body of the angel.  The wings were attached in two places and had some hot glue showing so to cover the spots I placed two large rhinestones on top of the hot glue.  Sorry I don’t have a picture. 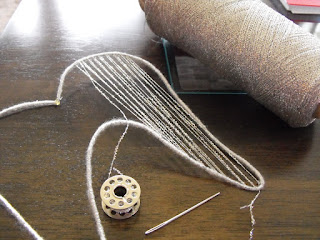 A last minute addition was to add arms and some knitting.  The arms were done the same way as the wings and the halo.  The knitting needles are toothpicks that I painted silver and added a bead to the end.  I can’t knit so Mum did the knitting for me, thanks Mum!  Again I don't have any progress photos, sorry.

To attach the last elements was a bit of a jigsaw puzzle.  The halo has a long stem that fit into the top of the cone and had a curve in it to go around the head.  The arms balanced on top of the cone with a dab of hot glue.  Then the head was attached on top of everything with a bit more hot glue.  Unfortunately some of the hot glue was showing around the neck area.  So the solution was to take some of the glitz thread and twizzle it making a round cord.  Then the cord was added with just a dab of Modge Podge around the neck to hold a bow; then the ends were encouraged to cascade down the body. 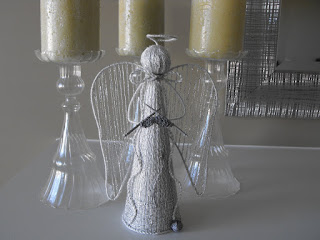 She is quite cute and I am looking forward to having her on my Christmas tree this year!
Posted by Ngaire at 4:44 PM 3 comments:

Labels: Do It Yourself, Finished Project, Holiday, Knitting

After I finished the Three Shaft Theo Moorman scarf I was left with scads ~ well a full ball and a bit ~of the ladder ribbon yarn that I had used as inlay.

This yarn is Bernat Matrix and the colour is called Natural Network.  I had used a similar yarn once before as warp with good results so I thought it would be a great use for it. 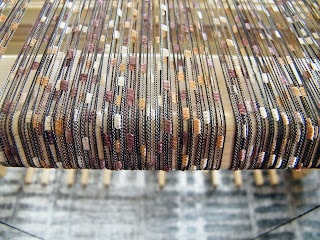 I pulled 94 ends and sett them at 12 ends per inch ~ 1 per dent in a 12 dent reed.  I wanted this scarf to wear with a black blazer and since I’m really, really short; I pulled only 80 inches for warp length. 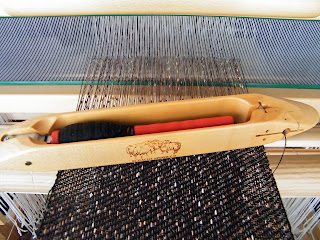 I knew that the end result I wanted was a loosely flowing scarf that had the ladder colours popping through randomly and an undulating twill appearance; so I threaded the loom in a straightforward 2/2 twill, and treadled it the same straight twill. 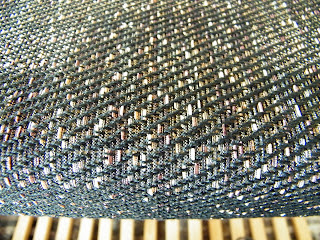 I made sure that I beat extremely lightly to allow the 2/8 tencel weft to slip and deflect over the colour spots in the ladder yarn.

While I was weaving the scarf I beat to maintain the 45 degreeish angle and aimed for 12 to 13 picks per inch.  To achieve this I beat on the closed shed after changing pattern shafts.  I basically laid each thread softly in place. 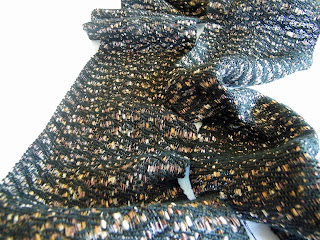 When I took the scarf off the loom it looked like the weft had pretty well covered the warp, but after washing I got MAGIC!  It really moved around and gave the ladders lots of play room. 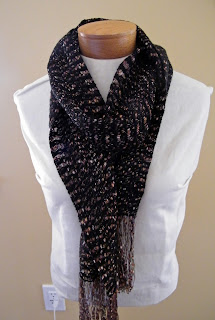 The Tencel weft slipped around and started to look more like the undulating twill I had hoped for.  The ribbon popped out here and there and it looks great. 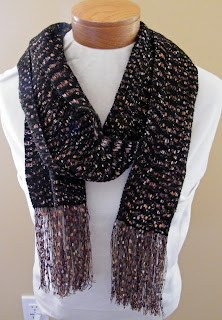 The best part of it all is that I didn’t have to twist the fringes…..ladder yarn doesn’t fray.
A great stash buster for me too!

The garden shot for today is Cotinus Coggygria 'Golden Sprite' (Golden Smoke tree), amazingly the new leaves come out almost burgundy in colour.  I coppiced this shrub in late winter to encourage lots of leaves and few flowers. 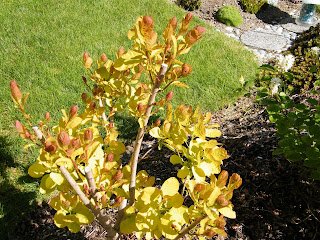