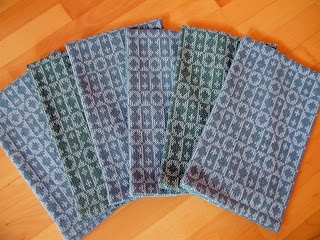 My very quick Turned Summer and Winter tea towels are done. They were such a fun project to weave; and especially nice to weave since Ngaire pulled the warp for me! 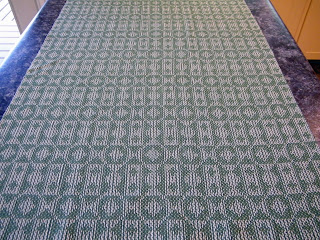 This is a photo of one of the towels before washing. I have just finished machine stabilizing the hems and this is my ‘final inspection’ to make sure there are no errors. Thankfully only one tea towel out of the six had an error and it was a very easy fix! I had to sley these towels 20 epi in a 12 dent reed and so you can see the reed marks at this stage. 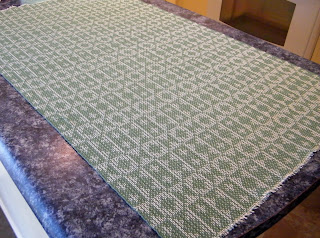 I noticed when I was standing off square to the tea towel that there was a really interesting zigzag effect. This was totally unexpected since the pattern is basically rectangular blocks, but it certainly adds to the visual appeal. 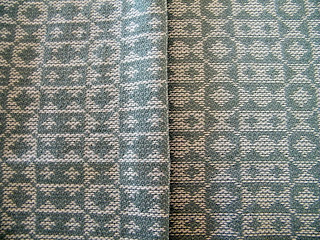 This is a closer look at the Summer side and the Winter side and you can see that all those pesky reed marks have miraculously disappeared. I guess crossing your fingers and toes really does work! 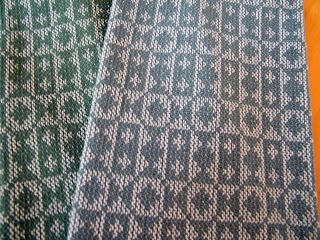 I only had the enough of the soft teal weft to complete four tea towels, but luckily I had a slightly darker green/blue 2/8 cotton for the final two tea towels. Here they are side by side and I’m really pleased with both colours. 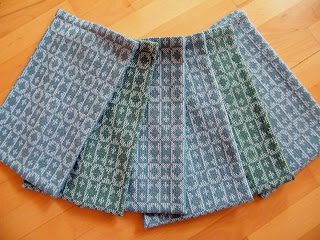 So here they are, all hemmed and pressed and ready for our fall sale in October. The only thing I would change is the length of the repeat. Each full pattern is just over three inches in length on the loom; and by tightening it up I could add weft stripes. Ah well ~ next time. 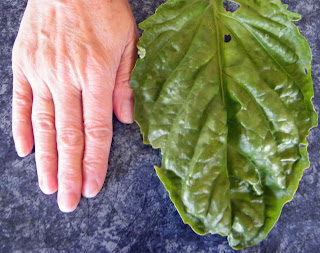 We grew a type of basil this year called ‘Lettuce Leaf’ and it grew fantastically. As you can see ~ bigger than my hand! This basil tastes lovely and if I could just keep the garden pests from enjoying them too, I’d be in heaven!

I’ve been thinking that adding some table linens to our sales inventory for awhile, and now seemed like the perfect time as we have scarves galore! I seldom weave outside of the 2/8 grist, but I'm really enjoying weaving with bigger grist, things weave up so fast! I am using a draft that Mum has used with great success in the past; below is a photo of the runner she made with 2/12 cotton warp and 1/16 natural linen weft and it is one of her go-to-runners. I love the large motif of the fancy twill and these colours are very subtle. 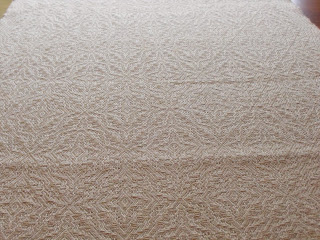 The warp for my runners is unbleached 2/5 cotton and I have enough for two runners. The weft that I’m using for the first runner is silk noil in a soft plum that has bits of cream, brown, black and red. The pattern really shows up well with the plum weft. 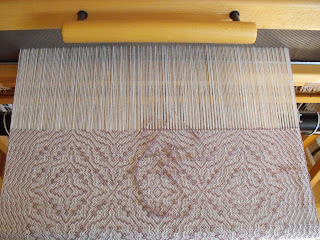 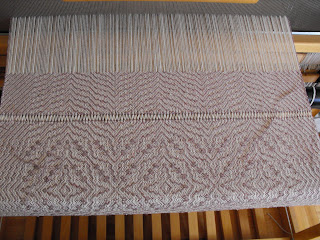 The weft for the second runner is a similar silk noil but in grey. The weft has more variation in grist than the plum weft, unfortunately there are a lot of knots in the skeins so I am constantly reaching for the scissors, hence the title running with scissors! 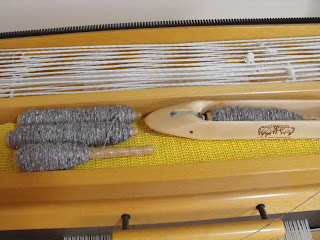 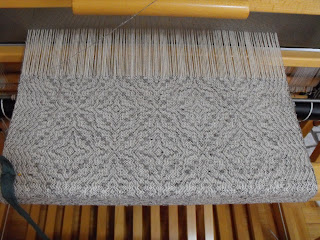 The runners are still on the loom at this point and I am really looking forward to seeing them completed. I’m really enjoying the easy weaving of the runners and so I am thinking about tying on to the warp.
Posted by Ngaire at 4:57 PM 5 comments: 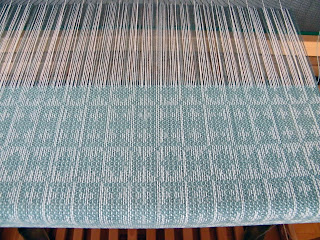 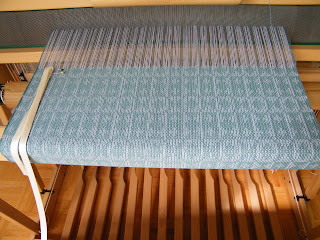 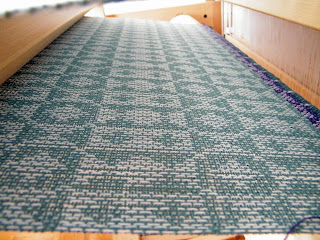 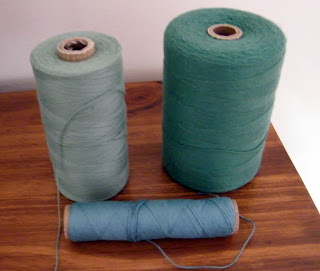 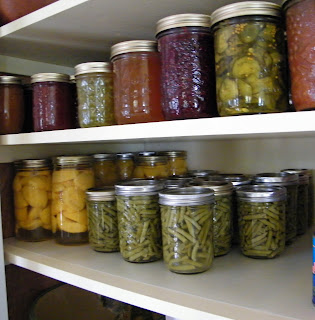 Love in a Mist

I had a full pirn of Azure Tencel and two hanging selvages already wound and in film canisters that didn’t work with the last project so I decide to build a project around them. I have been doing a series of lace weaves with Bamboo warp and Tencel weft so I looked at the small Bamboo section of the stash and luckily there was one that would work! 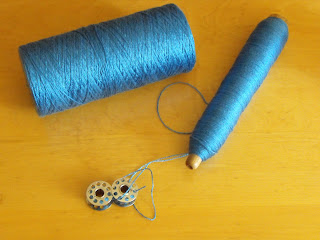 This may come as a surprise (not!) but I wanted to try a new lace weave and Swedish lace came to mind. I liked the pictorial properties that the lace has. I found a draft on Handweaving.net for hearts on 16 shaft showing hearts facing each other and changed the draft to suit my loom, which only has 12 shafts. I ended up with a 9 shaft pattern. 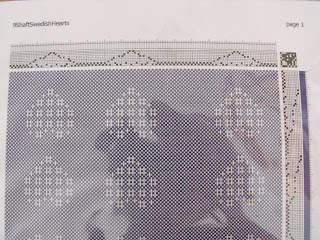 Due to the size of the hearts and not wanting to cram them too tightly I was only able to get three hearts across and for added interest the hearts are offset. When I saw them on the loom I was a little concerned because the floats were quite long at just a smidgen over ¼”. 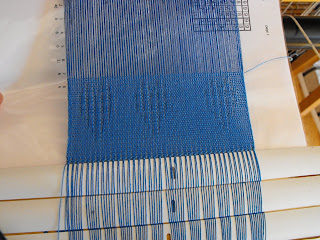 The weaving went quite quickly once I actually sat down to weave, funny how that works! I took my time and measured every pattern repeat as I went because it would have been noticeable if they were differently sized. I didn’t have to do any un-weaving as miraculously each pattern repeat was the right size which is a first for me! 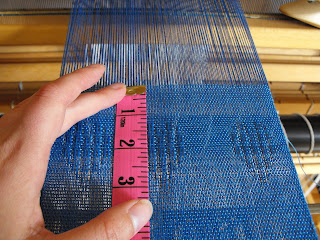 At the halfway point I changed the direction of the hearts, because I wanted the ends of the scarf to match. There was an optical illusion that made the upside down heart rounder and shorter, but they weren’t! 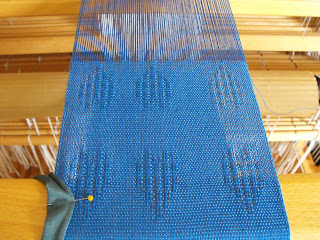 After washing I stuck the scarf outside and learned something interesting. Bamboo takes a very long time to dry but if you stick it outside at 35C with a light breeze in about an hour it will be dry! 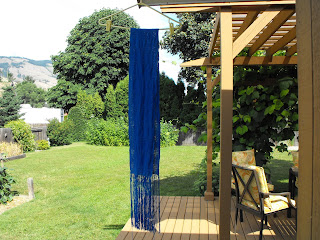 This scarf is so lacy, truly lovely – even with the wrinkles! 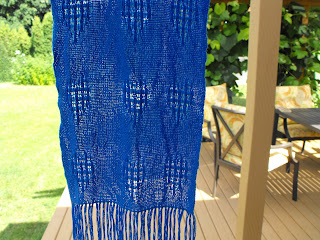 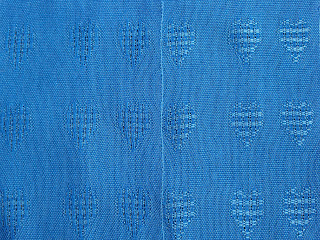 When I was twisting the fringe I was using a cookbook called Mediterranean Diet to hold the scarf and that gave me the idea to call the scarf Love in a Mist because it reminds me of the delicate blue flowers of the same name. They are also known as Nigella and the seeds are edible, tasting of pepper and lemon and is mostly used in Middle Eastern Food. The picture is from the herb garden that lines the path to the front door. 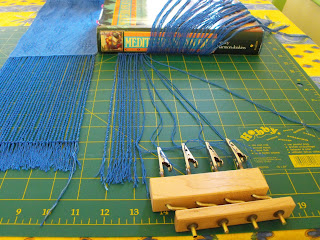 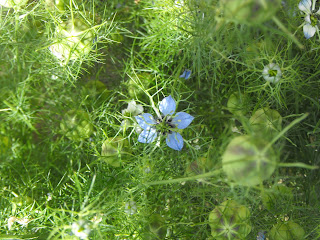 The scarf has a wonderful drape and I love the combination of Bamboo and Tencel. Bamboo has such a richness of colour and the Tencel adds lightness and shine. It is a wonderful match as long as the Bamboo is used as the warp and Tencel is the weft ~ reversing the two can create linen-like hard selvage turns as the Bamboo keeps it round shape and doesn’t snug up quite as well.

The heart shapes are really subtle and not ‘cutsie’, just lovely and elegant. 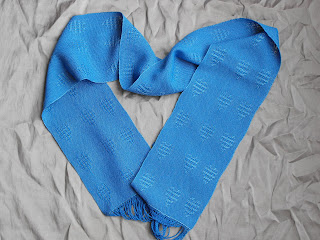