Milk kefir may be one of the strangest things.  It is probiotic milk that you may have seen in your local supermarket.  But you can easily make it at home. 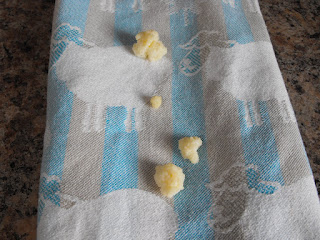 Place about 2 tablespoons of them in a glass jar with 2 cups of milk.  Lightly cover the jar with a piece of plastic.  And let sit on the counter for 24 hours. 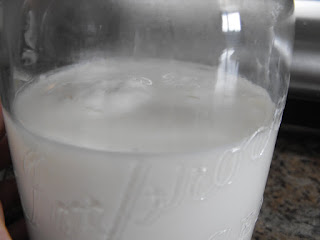 After 24 hours the milk has slightly thickened to the texture of thick cream.  Pour the milk kefir through a plastic strainer to separate the kefir grains from the milk.  Use plastic as the kefir reacts with metal.  Then it is time to make a smoothie! 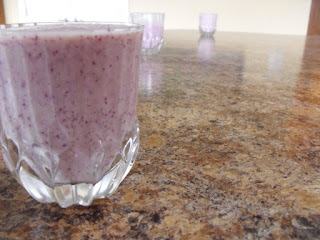 Labels: Do It Yourself, Food, Milk Kefir

Last year Ngaire and I joined the Qualicum Weavers and Spinners Guild which is about 72 kilometers away.  It is a beautiful ocean side drive down Island from where we live in Comox, and well worth it, it is a wonderfully active guild!
This May the Guild celebrates its 25th anniversary and so a challenge went out ~ make something for the May meeting using ‘silver glitz’. 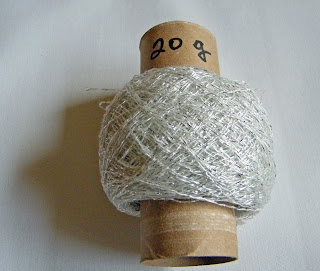 Those who took up the challenge were provided with 20 grams of silver glitz plied with fine white cotton. I wanted to make something completely outside of my comfort zone.   I decided to try my hand at spool knitting; something I haven’t done since I was a child.  My plan was to make a piece of jewellery of some kind.  I was still vague about what at this stage! 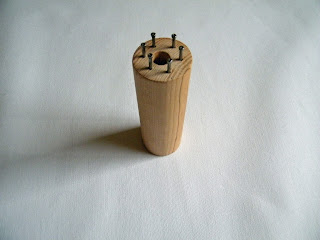 I didn’t have a spool knitter, so Michael made me this one using dowel and nails ~ lovely and rustic, just like I remembered ... and the best part is that it worked like a charm! 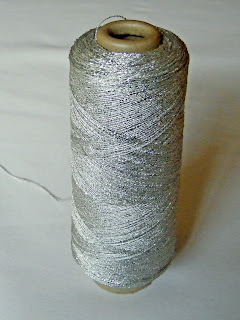 As soon as I started I came across three major problems.  The first was that the silver yarn provided by the guild was too white ~ so I switched to this silver from my stash. 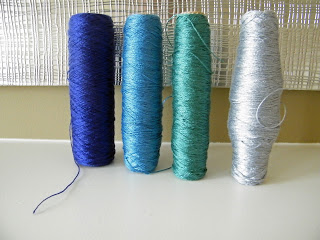 The second problem was that the silver yarn by itself was too thin, so I added a thread of silver Tencel for shine and bulk ~ luckily I had just a wee bit left after weaving this 12 Shaft Advancing Twill Scarf. 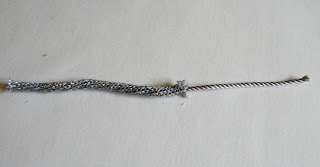 The third problem was that the spool knitted cord collapsed onto itself and was far to floppy and skinny.  So I bought a meter of silver cord and pushed it into the center of the cord to add bulk. 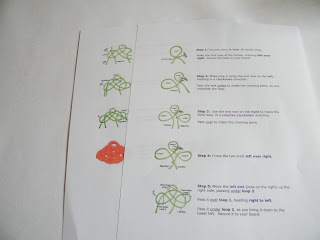 Once the meter of cord was knitted up I had to find something to make ~ this is when ‘google’ did its magic and I found these printable instructions for making a Bumble Bee Knot. 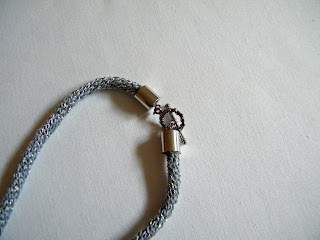 Since I had set off without a plan; I now had to find a way to finish the ends of the scarf.  I immediately ruled out tassels and found myself searching for jewellery findings that would fit the ends of the cord.  Ngaire found this in the mark down bin at Fabricland and it’s perfect! 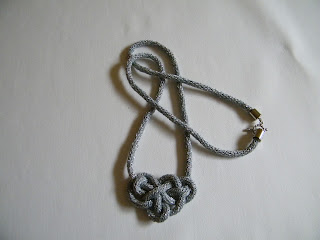 This is my finished necklace, just in time for the celebration! 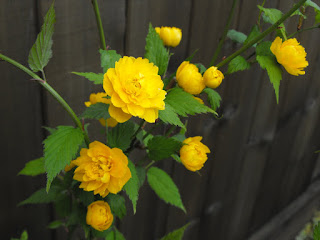 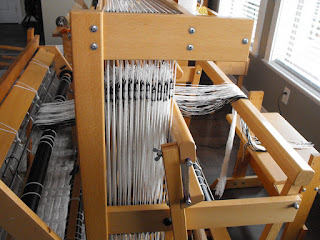 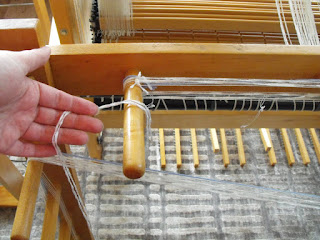 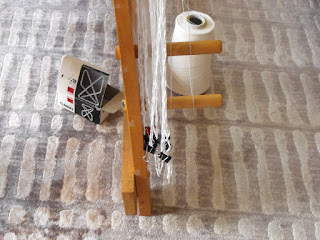 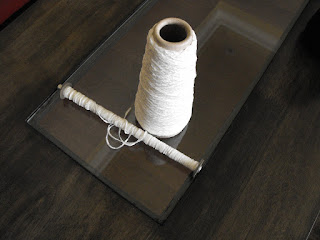 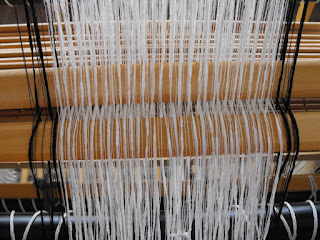 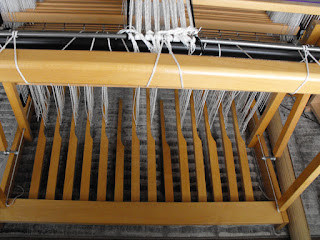 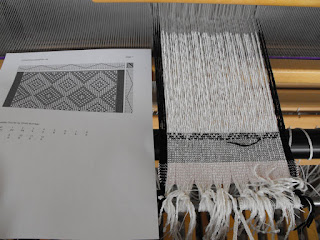 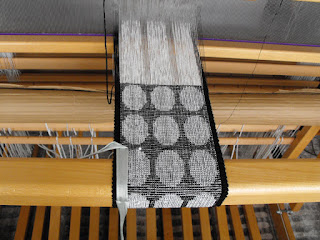 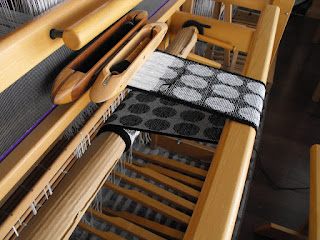 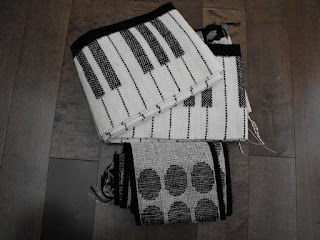 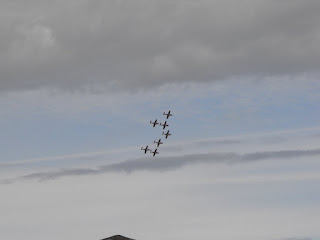 When Mum and I cleaned out the stash in January, we found some black and white chenille, which I only use for one thing – Piano Scarves!  There was only a little bit of white left; just enough for two scarves. 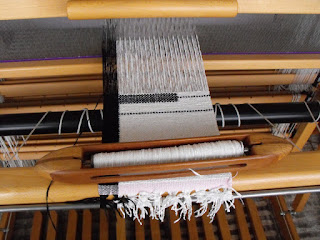 The warp is white chenille with a band of black on one side.  The draft is just a four shaft plain weave.  All the patterning comes from the clasped weft technique. 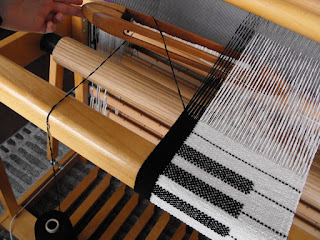 I use a large 15 inch boat shuttle made by Little Man Howell to hold the chenille.  It holds enough chenille on it for more than half of a scarf, about forty inches.  It is just amazing. 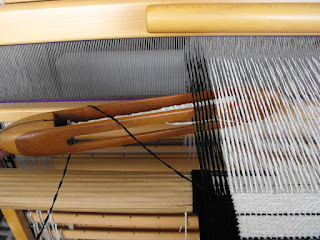 The scarves wove up quite fast this time.  But I caught the ‘flu and I have been sick for a couple of weeks.  So the scarves have been sitting in a pile waiting for me to hem them.  I’ll get to them soon, promise! 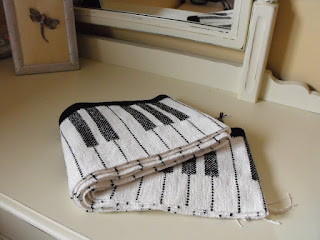 Whenever I do these scarves I always run out of warp.  I have had to add extenders onto the warp a couple of times.  So this time I added extra warp - just 18 inches - but enough I hoped.  Well somehow I ended up with 53 inches of warp left over! 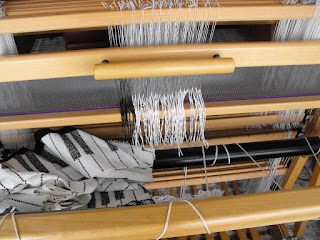 Not enough to do anything with – or is it ?!  Find out in the next blog post.

Final Garden Shot is the first leaves and catkins on the weeping variegated willow.  So pretty! 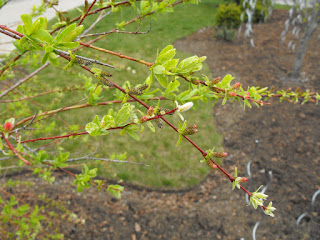