So to recap - I tried to weave some Christmas Tea Towels in a Christmas tree pattern in Summer and Winter.  The selvedges were terrible and the 2/16 cream cotton warp was starting to droop after weaving only 5 inches.

I went onto Handweaving.net to look for a new pattern for my Christmas tea towel. Handweaving.net is one of the only places that has 12 shaft weaving drafts and I needed to use all of my shafts because I had close to a thousand threads!  I found a lovely pattern that looked like poinsettias. 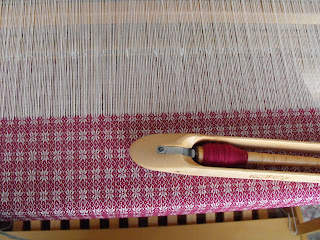 For tea towels I usually weave about half an inch of waste yarn at the beginning which evens out the warp.  But the edges were pulling in and puckering. 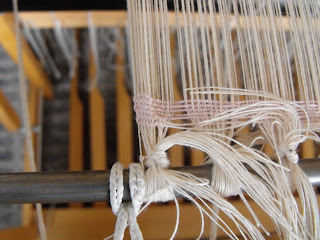 The bouts must have been too large when I lashed onto the cloth beam.  You can see the reed pulling the warp out almost a quarter inch. 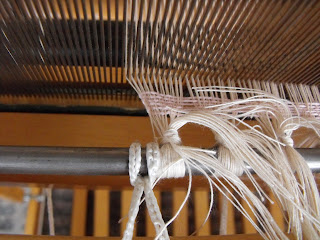 So I put in two Venetian blinds and that spread out the warp enough to give me a nice firm base to weave from.  I’m glad it worked because I wasn’t looking forward to re -lashing the warp for third time. 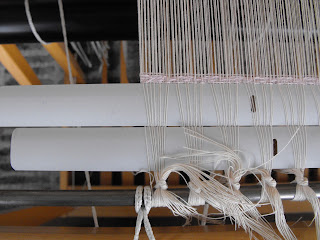 For the first two tea towels, I used the 2/16 cream as the weft for the majority of the tea towel and wove it in the poinsettia pattern so the tea towel has a wonderful texture.  I wove a band of 5 poinsettia’s in 2/8 burgundy cotton on one end. 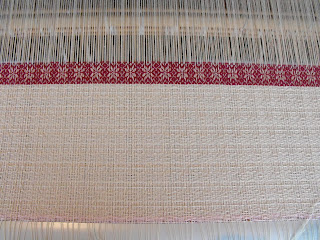 The next tea towel I used the 2/8 burgundy cotton for the whole tea towel.  I noticed that under every third poinsettia there were x’s not a diamond shape.  I was quite confused at what was causing it. Then it clicked it was the sleying of 3 per dent that was creating the shapes. 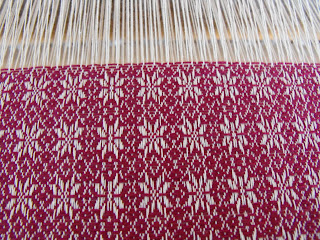 I thought that I had put enough warp on for four tea towels but after the third towel I was left with only twenty five inches.  I’m not sure where I lost the warp but oh well.  I just cut off the three towels ~  and to the washing machine.

Disaster!  The burgundy ran, it is hard to see in the picture (it was sunset when I took this photo) but there are light pink splotches everywhere.  So into the laundry sink filled with Synthrapol to soak. 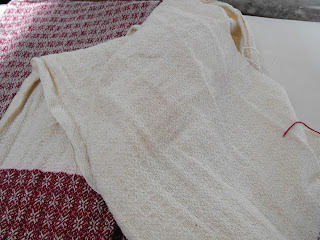 I only placed the two light tea towels into the Synthrapol and after an hour the water was a lovely shade of pink.  The burgundy towel didn’t look like it was effected so into the dryer it went.  It wasn’t until I had dried and pressed the towel that staining showed up. 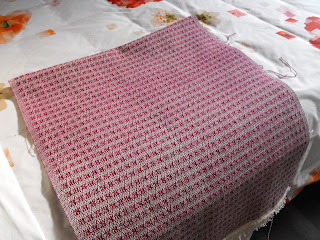 So right now the towels are in a pile waiting until I have time to try soaking the burgundy towel in some Synthrapol.  The two light towels are looking good I just need to cut them apart, pin the hems and sew them.  I may get these towels done before Christmas! 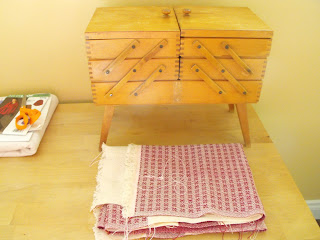 The final garden shot is grass seed heads on a typical day in late autumn here.  The day usually starts with dark clouds then it starts to clear in patches which are called ‘Sucker Holes’ (cause they sucker you into thinking it will be sunny all day) in the afternoon the fog rolls in again.  The tree behind the grass is a Tulip tree and if you look closely you can see the first ever seed head on the tree.  It was so high up that we didn’t notice the flower in the spring. 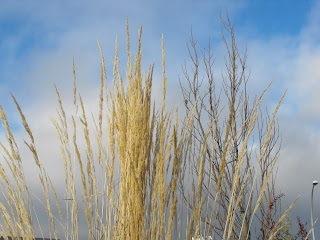 I came home from my last guild meeting all fired up!  I saw a collapse weave scarf that really excited me.  It was woven by Linda Wilson and featured a warp of 2/18 merino alternating with a knotty rayon and crossed with a warp of fine super twist merino.  Linda was kind enough to share her recipe and sell me a cone of the elastic super fine weft so I could weave my own scarf.  The weft was soooo fine, like frogs whiskers and has quite a bit of spring to it.  It is the big cone in the back. 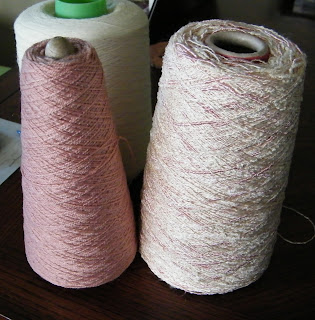 I swear I had that warp on the loom within 6 hours of the meeting ~ I was that excited!  This project fit me ‘stash busting’ requirements to a tee.  I already had a cone of  2/18 merino in blush pink and a huge amount of rayon knot yarn in cream and blush pink ~ so I was set! 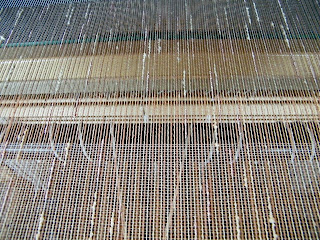 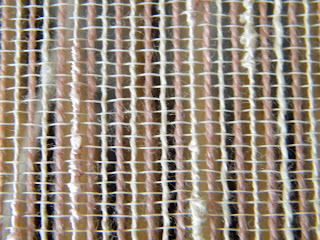 I must admit that it was quite difficult to maintain such an open weave and I found that squeezing the weft on a closed shed worked the best. 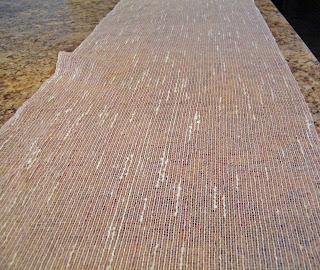 The scarf wove up really quickly because it was plain weave and even now, before washing, you can see the texture of the scarf. 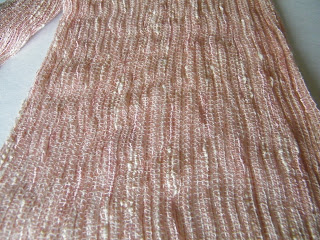 Here it is after hand washing and a full 20 minutes in the dryer!  I must admit that putting it in the dryer was scary, but I checked every 5 minutes and only stopped when it was completely dry. 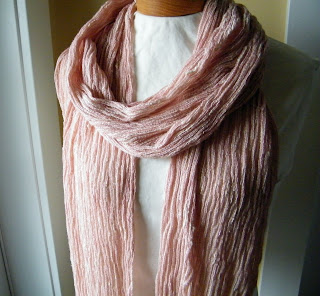 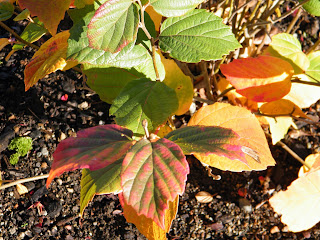 The garden shot for today is Fothergilla gardenii 'Mt. Airy' (Dwarf Fothergilla) which is changing colour in an amazing way.
Posted by Lynnette at 9:00 AM 5 comments: