Even though I just blogged yesterday I'm so excited I've got share!  The March/April issue of Handwoven Magazine is out and I have a project featured on pages 46-47 and 48!  I can't believe I got three whole pages!
Interweave returned my scarves along with a copy of the newest issue of Handwoven by FedEx this afternoon and now I can do a wee bit of tooting my own horn! If you don't get the magazine you can see my Paper Spot Scarves on Weaving Today (link below) and by scrolling down until you see the photo of the scarves which have been so beautifully photographed draped over a chair...
http://www.weavingtoday.com/blogs/handwoven-issues/archive/2012/03/22/Handwoven-March-April-2012.aspx
It was so hard not share the project while I was weaving it last summer, but the reward of having it published in the 'benchmark magazine' is truly uplifting for me and it really makes me want to sit at the loom and try out new weave structures.
I've just noticed that the first project of mine that Handwoven published last year had the same page numbers!  I guess I'm a middle of magazine kinda gal!
Posted by Lynnette at 7:23 PM 9 comments: 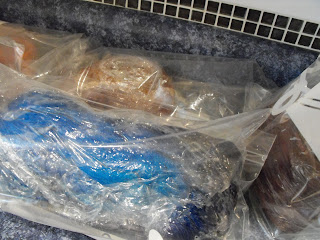 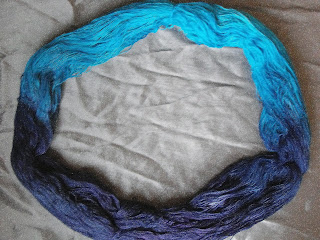 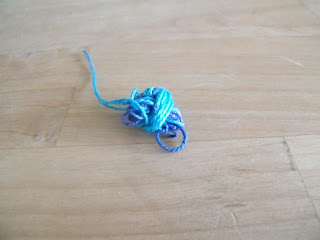 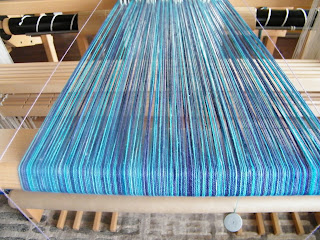 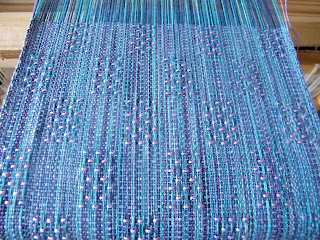 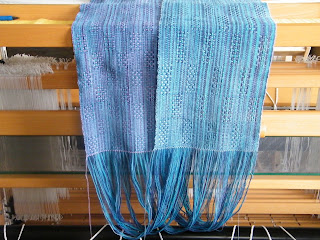 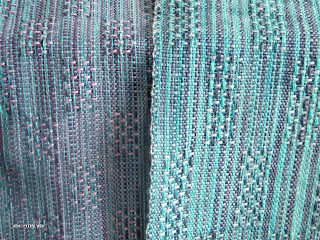 Winning by a Mile

So after the frustration of the multiplely woven first inch, the runners are done! 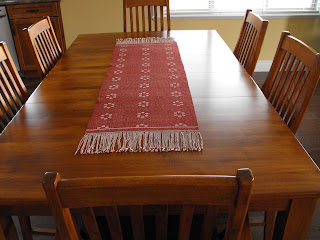 The warp is 2/8 orlec in rust and 2/8 cotton in straw, the weft is 2/8 orlec in rust.  To help design the placement of the circles on the runner I cut out little pieces of paper the correct size and then I play with the paper.  It really helps to be able to actually ‘see’ the final result.  I sat down with my tape measure and tried lots of different design placements; I decided to go with ‘more circles the better’ placement! 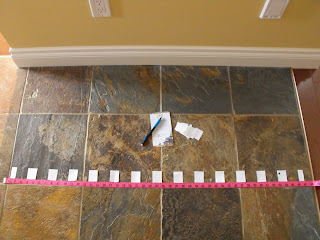 The runners had a tendency to draw in so I had to use a temple.  I got into a good rhythm of weaving with the temple that I barely noticed the interruption of moving the temple.    So much so that I didn’t take any photos of the runners on the loom! 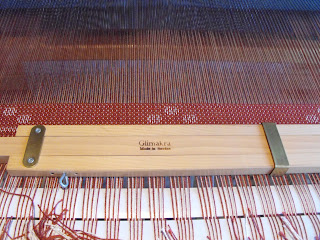 After removing the runners from the loom I like to braid the fringe loosely before washing.  It was a good idea in this case because of the two different fibres in the warp.  The cotton shrunk more than the orlec and that would have definitely made a twisted fringe wonky.  And there is nothing worse than pullingn out an already twisted fringe; that's a long and tedious task! 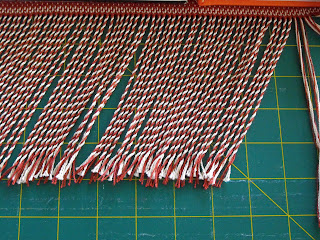 I really like how these runners turned out.  I designed them to go across the shorter width of the table so they could also be used as place mats.  The runners only got a quick press with the iron so I could take photos for the blog, they will be steam pressed soon and that makes a world of difference. 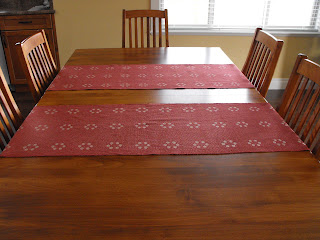 The runners are dual sided and they are stunning either side.   Although I think that the red side is more exciting because of the dramatic colour and the shine from the orlec. 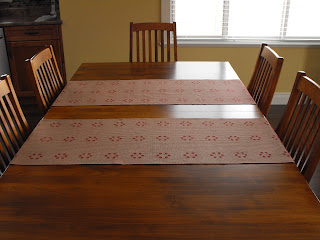 The gold side looks quite different from the red side; it is almost hard to believe that it is the same runner! 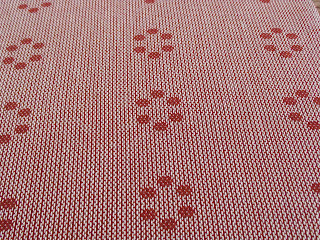 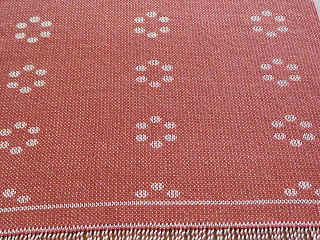 I really like these runners and they are something that I will be doing again. 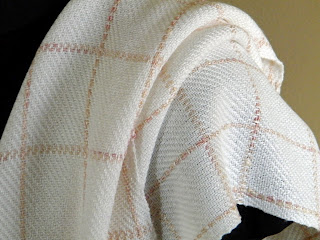 ﻿I've finally finished the rayon, novelty shawl that I wove a few weeks ago. I just couldn't seem to find the time to sit down and finish the fringe, so there it sat in an untidy pile in the spare room!﻿ 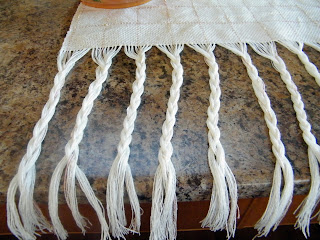 When the shawl came off the loom it was quite stiff and held onto the wrinkles ~ I had some doubts whether it would have the drapability I wanted after washing, luckily it did.
I don't twist my fringes before I full my fabric anymore; I found that I was having to reknot some of the fringes because of uneven shrinkage and since it's a job I don't like at the best of times, I'd rather do it just once.  So I just gather groups and do a loose braid, then I wash  the items as usual. 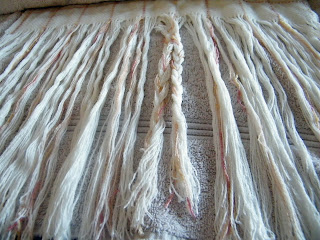 After washing, while the item is still wet, I undo each braid and finger comb the fringes straight.  You can see that they come out of the braid really easily. 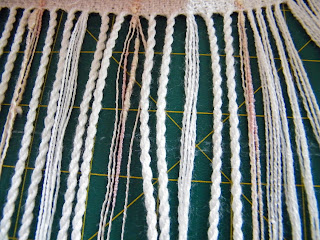 Because there are different fibres and colours and denting groups I've done the fringe in uneven twizzles on this shawl.  The groups of 4 novelty threads are twisted by themselves. Then there are groups of rayon with 4 threads per group and a single group in the middle with 6 threads.  This happened because between each group of novelty threads I had 38 rayon threads and in 2 per dent in a 10 dent reed ~ well, you get the picture.  Rather than see this as a problem I see it as a 'design feature' and as long as it's a constant repeating feature in the shawl I like it. 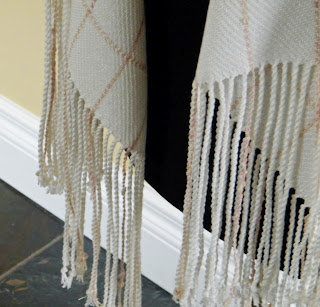 This shawl has beautiful drape and the fringes look lovely. 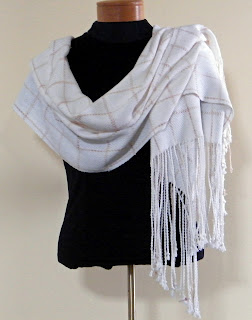 When the shawl was on the loom, it looked quite loosly sett, but wet finishing made all the difference and I can't describe how luxurious this shaw feels.
There is a slinky weight that just feels wonderful! 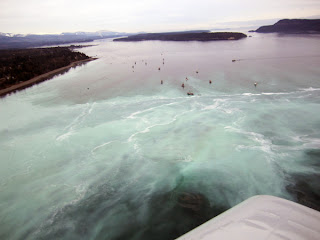 This photo is from the front page of our local newspaper the Comox Valley Record and these are herring in the channel between Vancouver Island and Denman Island!  There are so many herring in this run that they have made the water a light green and they actually make the water froth a bit....what an amazing site!  Needless to say the sealions and gulls are everywhere and having a field day!
Posted by Lynnette at 12:18 PM 4 comments: