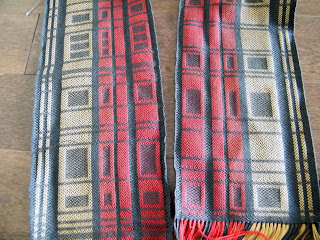 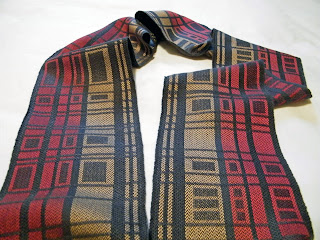 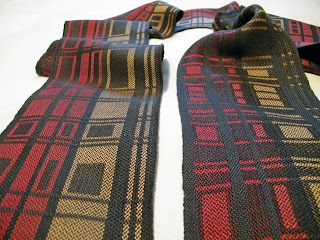 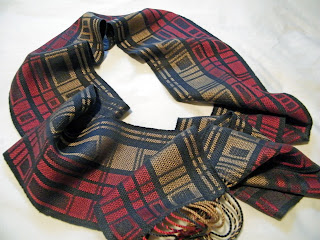 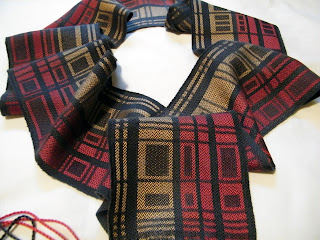 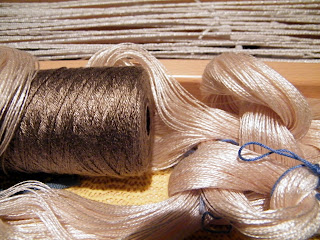 Pfffft – that’s the sound of my brain trying to figure out my newest project.  As soon as I started planning the project I had a huge brain fart and couldn’t think!  I’m pretty sure that being away from the loom for these past few weeks has made my synaptic receptors turn right off!
My plan was to do a three dimensional ‘art piece’ for my entry hall, figuring out  what I want to do is usually the hardest job.  My concept is a series of tapes of varying widths that can then be shaped off loom and put together on a flat background to make the three dimensional image.

So off I went to the stash cupboard and started pulling out the colours and textures that I wanted to use for my concept, plenty to choose from!

Then I sat in front of my library to choose the weave structure I’ll use; and that’s when it happened, that awful feeling that I couldn’t put my head around the problem…..I looked at every weave structure that might possibly work, I sat and fiddled at the computer, I mulled, I had a hot drink, I paced; all to no avail! Big, big brain fart!

I do my best planning and thinking while I’m weaving.  This must be the reason for the empty idea bin in my head, my time away from the loom.  The obvious remedy is to do what I call ‘Comfort Weaving’. 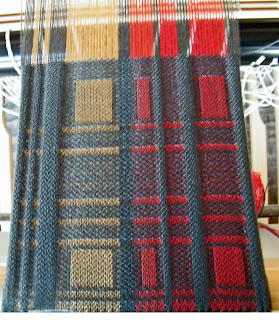 So my first  project  in my new house is exactly that, staying in my comfort zone I’ve put on a 2/8 Tencel warp for a scarf.  I’m using a modified version of Ngaires’ 12 Shaft Drall scarf and hopefully working through the process with make those synaptic links open again!  I had a great colour pallet in mind, slate grey, orange/red and gold ~ although the photo doesn't do it justice at all! 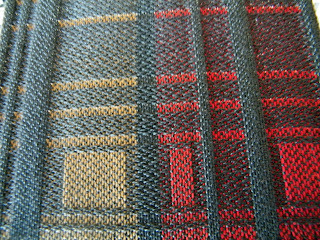 There are three blocks that can be woven using twelve shafts and my plan is to not stick to a pattern but to 'free weave' changing the blocks as they appeal to me, but still keeping some kind of loose patterning in play.
There is one more thing taking my mind off of weaving and that is the state of my garden.  Well it isn't exactly in a state because it's a completely blank canvas.  The builder put in some garden beds and right now they are ominously bare, and look very forlorn, just small weeds and bits of grass right now. 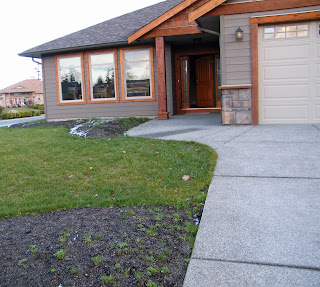 I must admit that I've got a lot to learn about what plant to put where.  Today at the Library I think I've found the perfect book, after just a short browse through the pages I'm sold!  I want everything including the Hardy Banana Plant.  Why you may ask ~ because my brother in Manitoba can't! 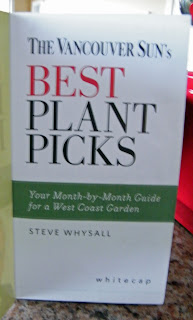 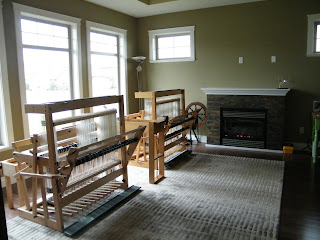 Finally, we have some semblence of order appearing out of the choas!  It's taken two full weeks to unpack and sort though the boxes and try to find a home for everything, and I must admit that I've hidden as much in closets as I can, because 'out of sight out of mind' works for me.  I feel terribly guilty taking over the living room, but what a great space to have for a studio! 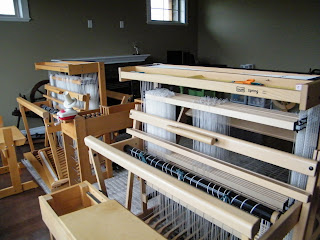 The two looms sit side by side and are looking very forlorne without warps on them, but now that we've unpacked the yarn, books and computers we'll get cracking! 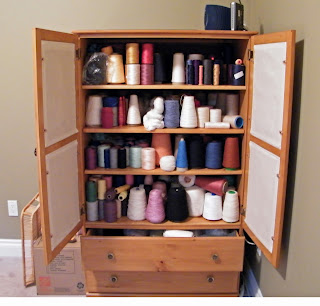 My weaving stash used to take up a full wall in my studio and now here it is crammed higgeldy piggeldy into one armoire in the guest room.  Every time I see it I have the urge to purge!  I think that with the internet and the availability of yarn on line my stash hoarding will be a thing of the past.  I may as well store less at home and only order what I need to complete a project and let the shops look after the storage. I will take a photo in a few months and see if I've lived up the the stash reduction binge. 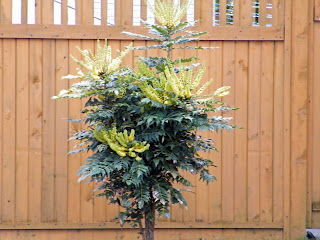 Moving to Comox has meant that we chaged climatic regions in a big way, from zone 5 to zone 7/8.  I try and get out for a walk daily and can't believe the beautiful plants we've encounted.  Our home came with grass and predug beds, so we are on the hunt for what to put into the garden.  This is a Mahonia (Winter Sun) and is blooming right now.  These yellow/lime green cones are stunning and will definately be one of the plants for me. 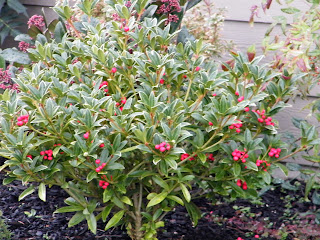 I don't know the name of this beautiful berry, but it's a stunner and I have just the spot for it!

Last night we had an amazing storm with hard rain and very gusty winds.  We saw the cushions for our lawn furniture moving around and went outside to find our large gas bbq had been moved from the patio about 10 meters onto the grass and tipped over.  We rarely had strong winds in The Okanagan Valley so it was thrilling to say the least!

We are still having the builders subs in on a daily basis tweaking all the little foibles that a new house brings so getting out and learning my new neighbourhood is a real treat to get away from the noise.  Today it is +12C and a light drizzle, so I'm off for a walk number two.
Posted by Lynnette at 11:19 AM 9 comments: