After I had cut the linen mistake warp off my loom, I decided that I had to get some mileage out of all the work I had put into it.  I really thought that the pattern I had planned was worth weaving, so I rethought the fiber and started again. 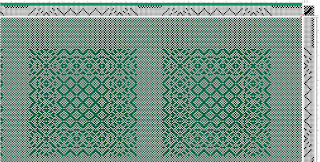 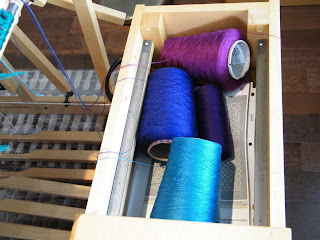 As usual I had to ‘audition’ the wefts I tried purple, iris, magenta and aqua and finally chose to use the iris because it really made the green of the warp glow. 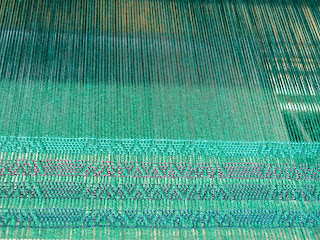 I always have trouble with greens although I don’t know why....mother nature uses greens everywhere and they always seem to work! 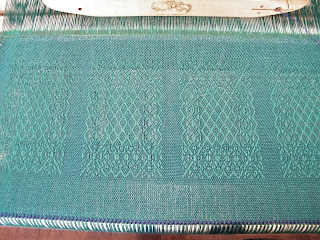 I wove the scarf with the warp floats on top, so you can’t really see the lovely purple weft in this photo. 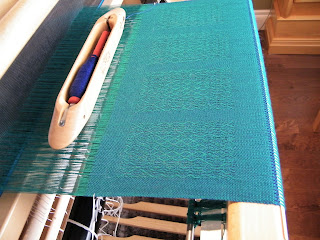 The pattern turned out beautifully with these pretty twill blocks. 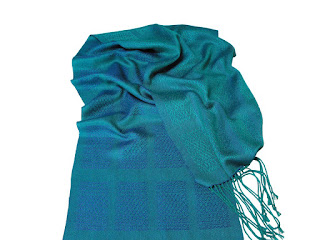 This is the finished piece with the weft dominant side forward. 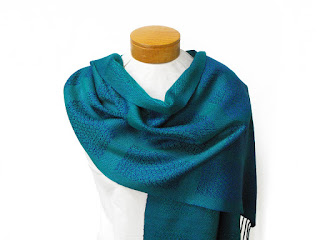 This is the finished piece with the warp dominant sided forward. 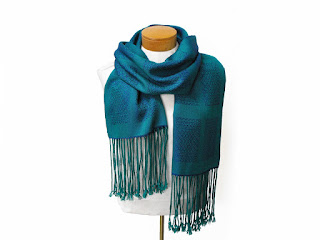 This scarf/shawl is for sale. 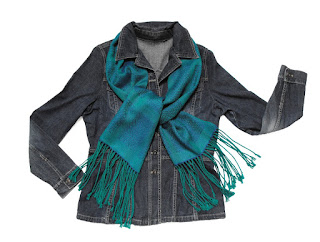 What a Mistake ~ Linen Warp

This is a tale of how things can go terribly wrong on the loom.  Frankly, looking back on what I will call the ‘big mistake’, I should have known that I was setting myself up for failure.

It all started with my trying to use up stash.... 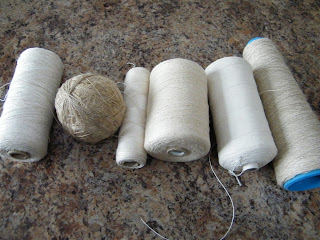 These are various amounts of 16/1 linen, the colours ranged from bleached white to natural. 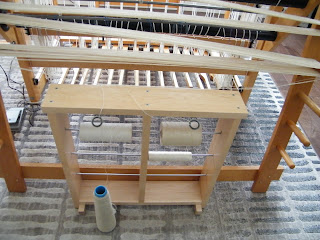 My thought was to pull the warp in increments, the first bout would contain all the yarns in the group and would be the centre of the warp.  When one of the yarns was used up, I’d stop that bout and make another bout with the remaining yarns and then split the bout and put 1/2 one each edge.  I did this process until all the yarns were used up ending up with 7 bouts each smaller than the last.  The final edge bout on each side contained the yarn of only one type. 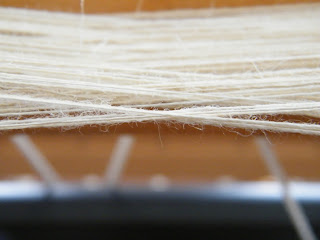 The first heads up that should have given me reason to pause, was that the ball of yarn shown in the photo was full of knots, so I had to toss that one out right off the bat, thus reducing the amount of yarn I had considerably.  The second heads up I should have taken note of was that even though I was separating the yarns as I came to the cross on the warping board to keep them in order to make sure they weren’t twisted over each other. I could see at the cross that the some of the linen was a tad hairier than I expected....but of course I plowed forward. 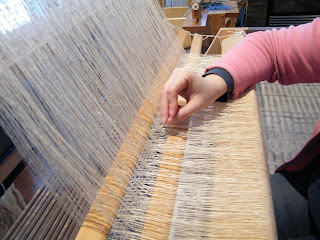 Pulling the warp on the loom proved to be a lesson in perseverance...every three inches or so I had to stop and use a blunt needle to clear the bridging that was happening between the yarns.  Nope, this didn’t make me stop and think....is this a good idea? 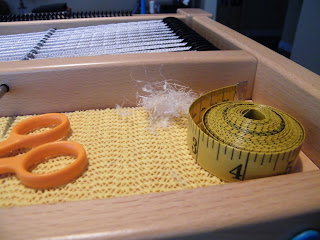 This is just a small sample of the chaff and fluff I was pulling off the warp as it went through the raddle.  By the time I was done I had a good handful of linen fluff. 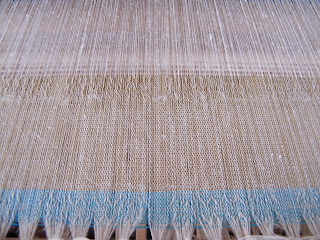 This is the start of the weaving and you can see a line of fluff across the web where I have unwoven, and this was my eventual downfall.  Each time I had to unpick due to a bridge forming between yarns I got this line of fluff.  On the edges where I was using just one type of yarn, of course it had to be the hairiest and bridgiest yarn of them all. 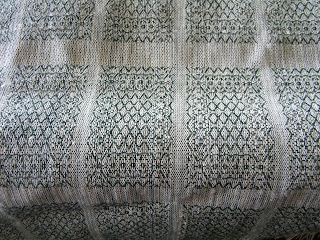 This is the pattern that I was weaving, a lovely straightforward and dramatic twill with dark green cotton weft.  Alas, it was not to be, because every time I tromped the treadle some thread or another would bridge and stick causing a skip, then when I unpicked I got the line of linen fluff if I was even able to pull the weft out! 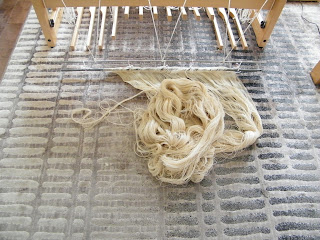 After about 20 inches of weaving I surrendered....I cut off the whole nightmare!  Of course this couldn’t be the end of it.  In my fervour to get the darn thing off the loom, I cut right through the texsolv lines on my back beam.  The final blow!
Posted by Lynnette at 11:06 AM 10 comments: