The weft auditioning process was really hard for this scarf.  The first round I went with purples because they are complementary to the coral/orange.  The top color is amethyst, middle is iris (a blue/purple) and the bottom one is red violet.  The amethyst and iris don't seem to show enough of the colour variations in the scarlet warp. 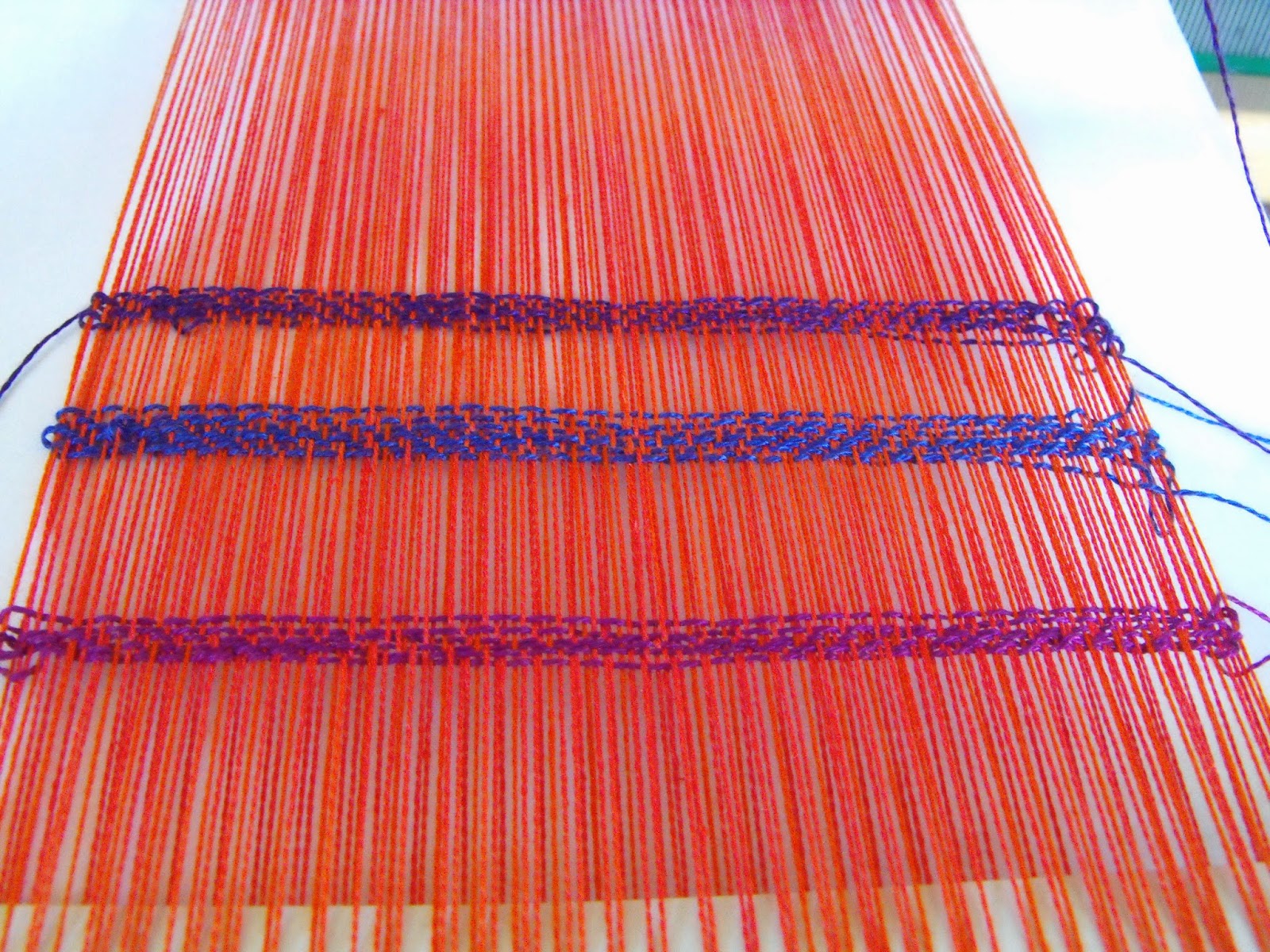 The second round the choices for weft are gold, white and the red violet from the first round.  The clear winner for me is the red violet! 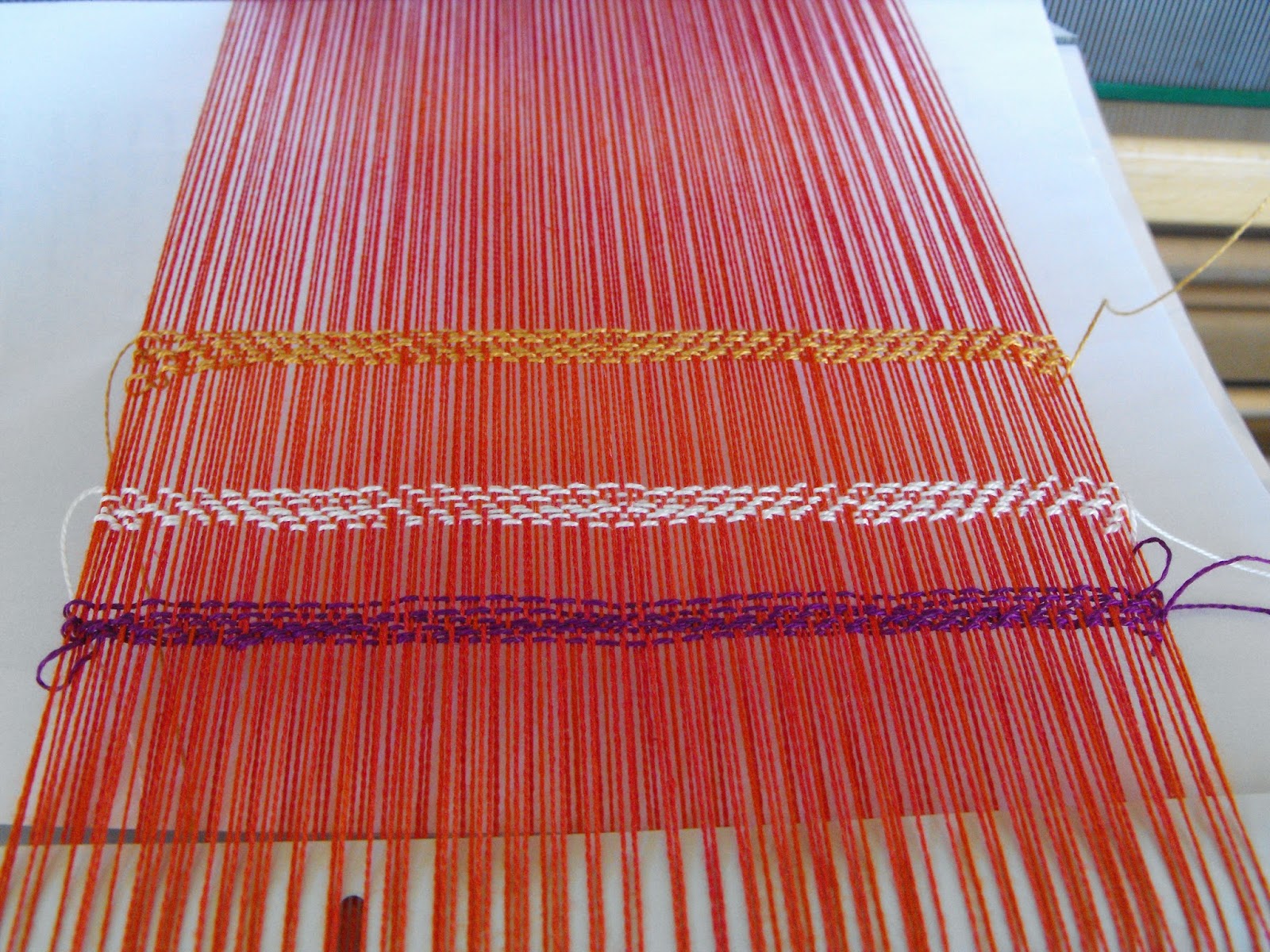 Now this is something that I rarely do . . . weight things!  I know that I should but it never really crosses my mind.  I think it is because I fill out all the project information on the computer before I pull the warp.  Anyway, the reason why I did this time was because I wanted to see if I had enough red violet Tencel to use for the weft. I used Moms scarf which has the same length/width as my base line. 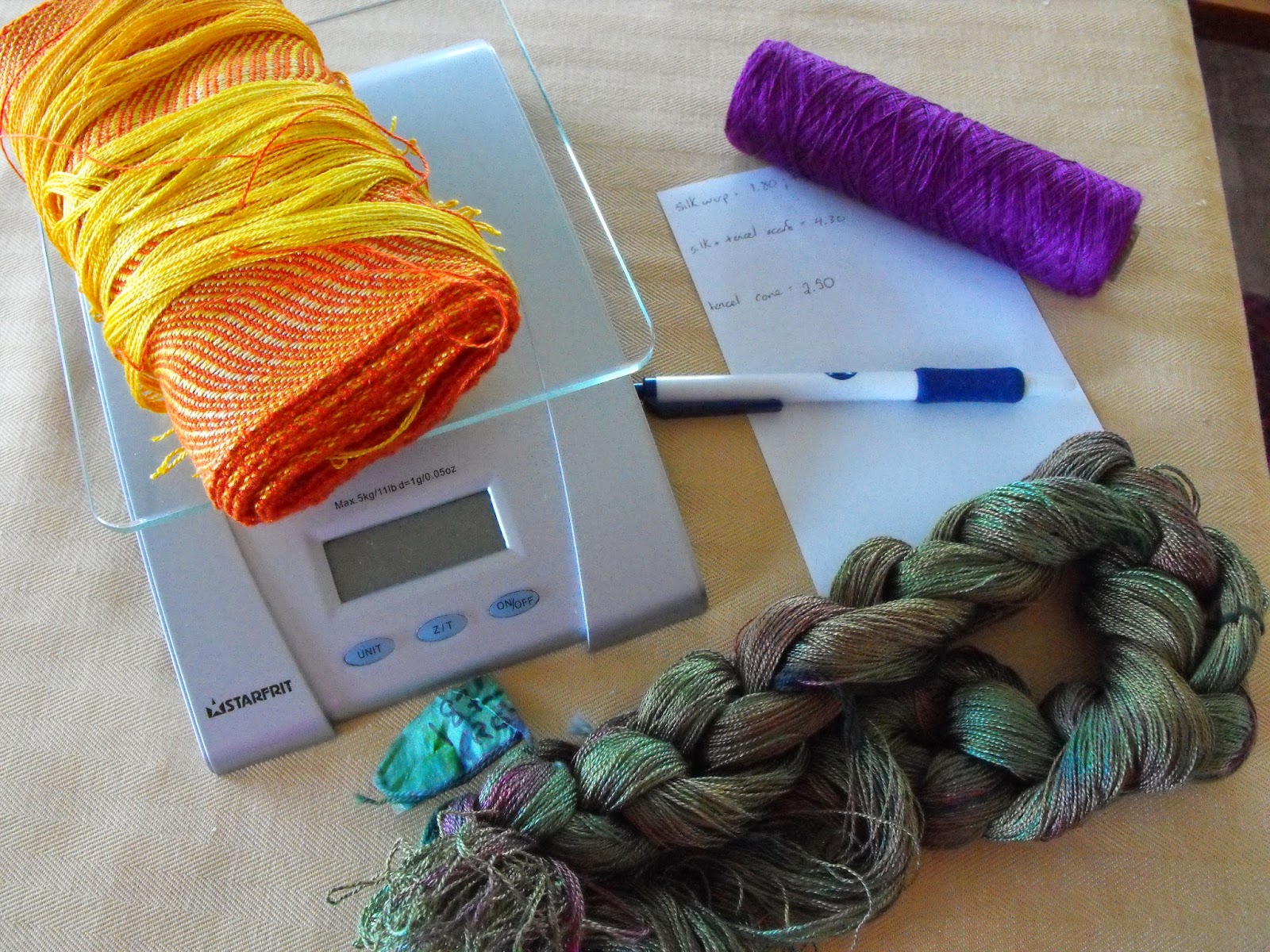 The pattern for this scarf has the same tie up as the Turquoise Silk scarf but I made simple changes to the threading and the treadling.  It looks like a blooming flower don't you agree and is really very lovely. 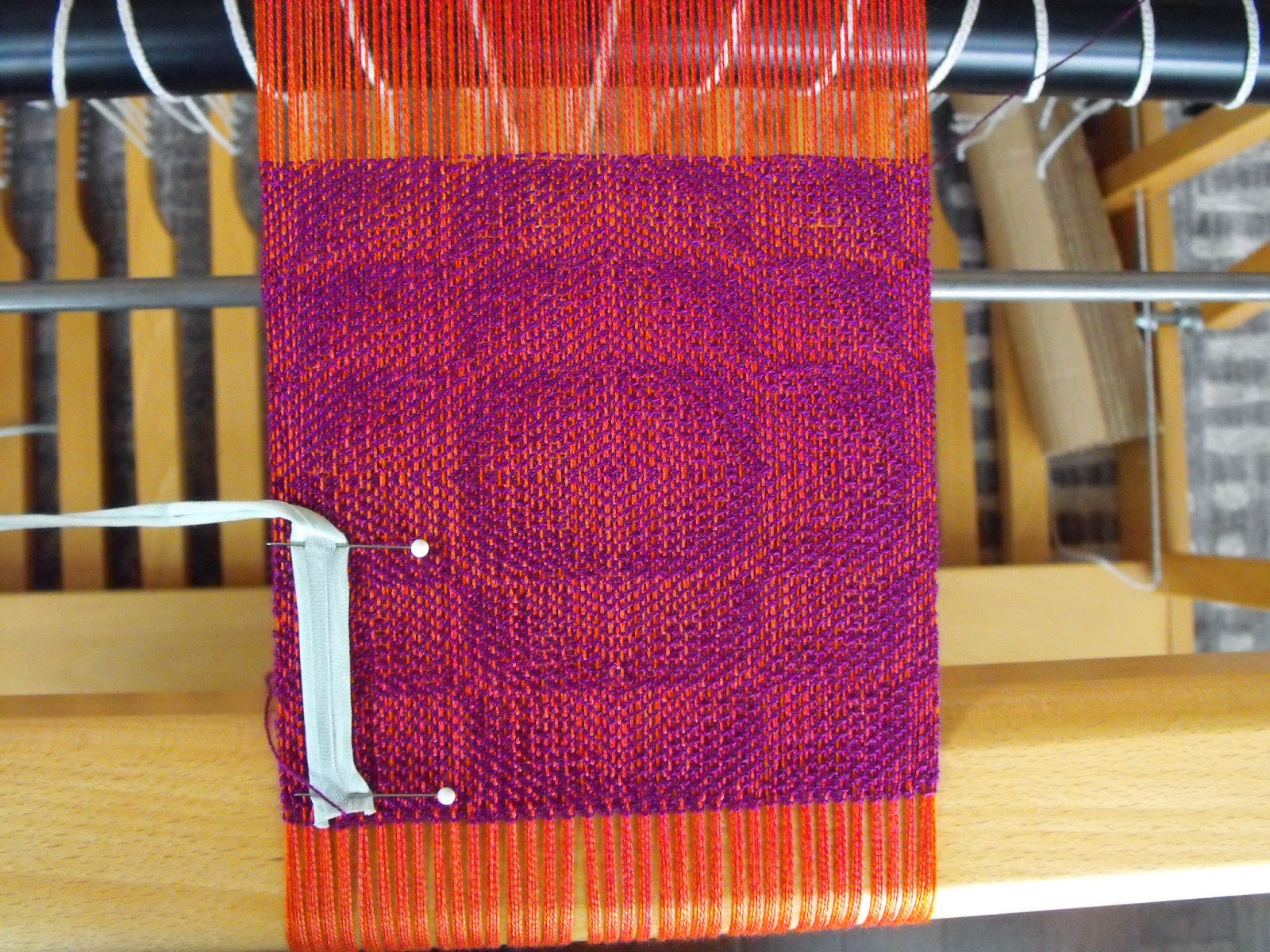 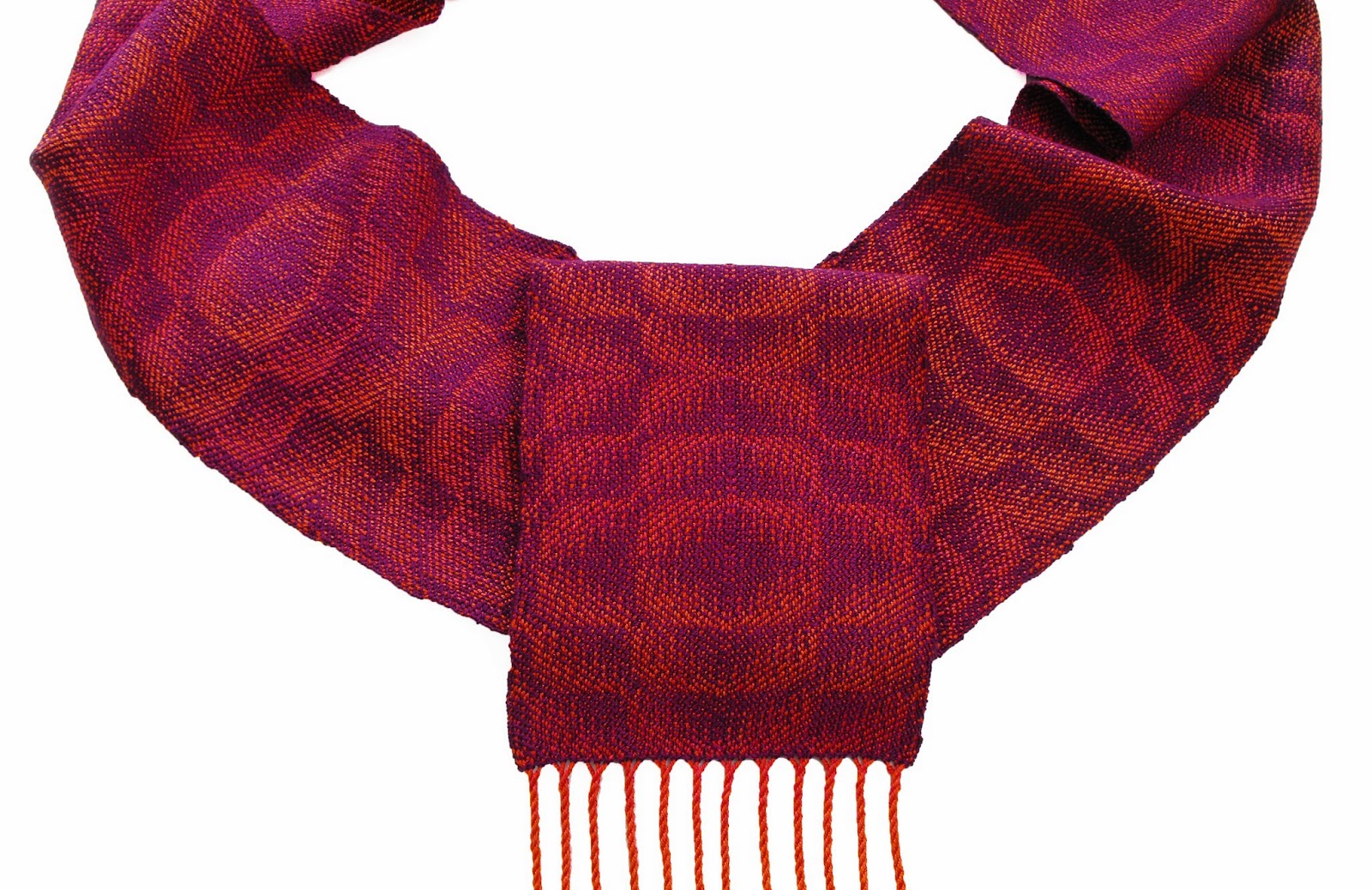 The two colours of the silk warp, scarlet and old gold, make highlights in the pattern making iridescence! 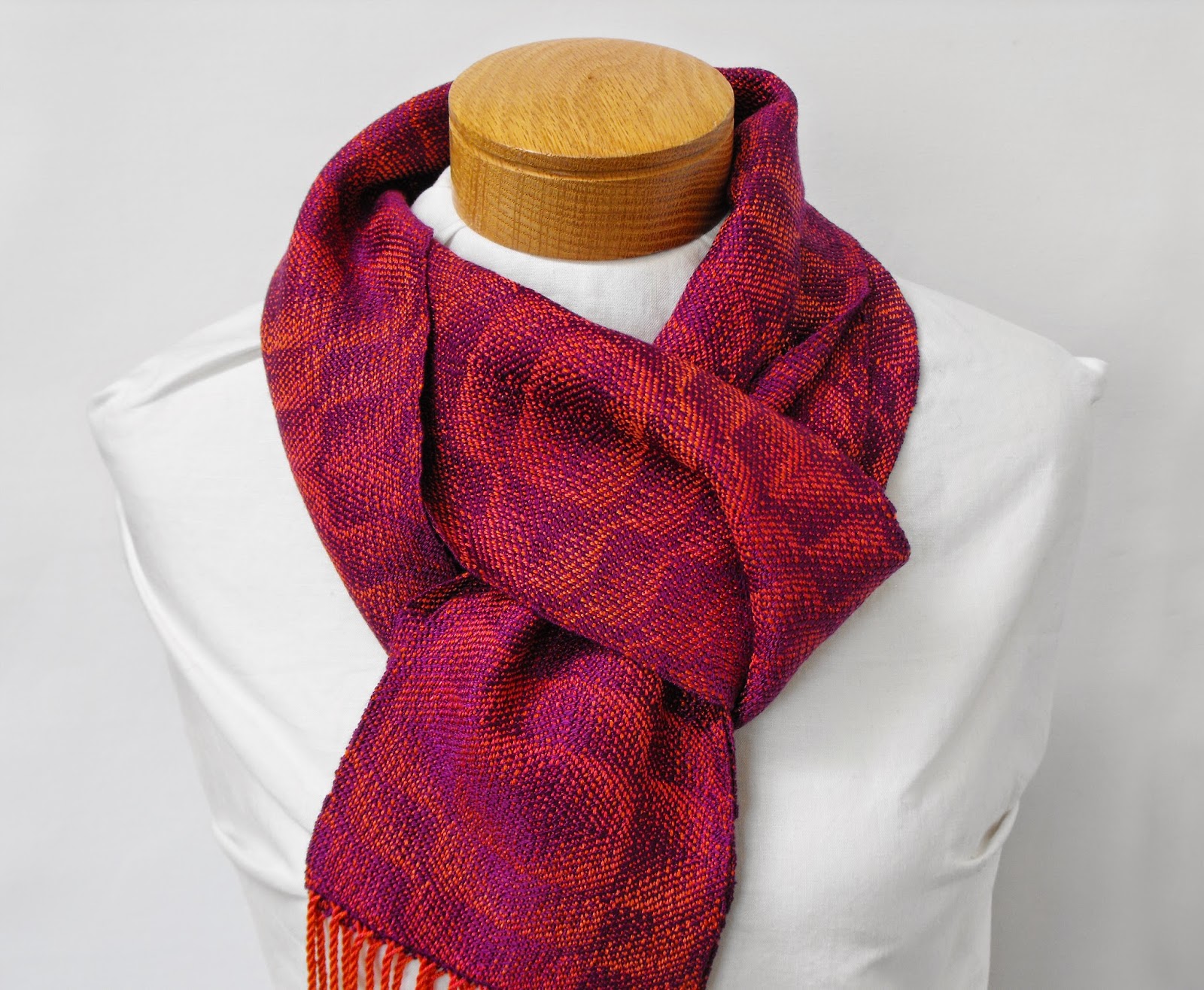 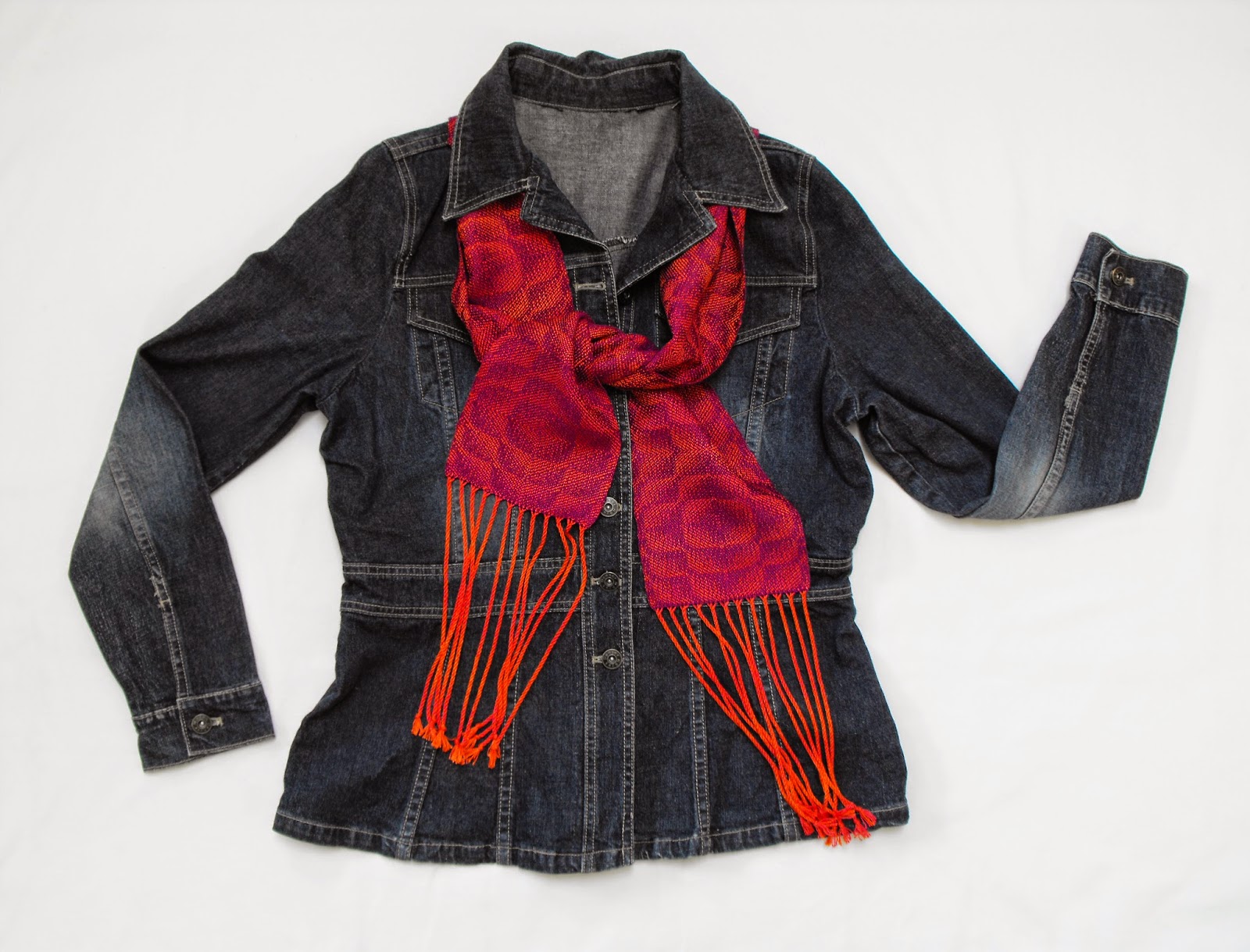 The closing shot of the garden is Hydrangea serrata 'Bluebird' which is just opening. 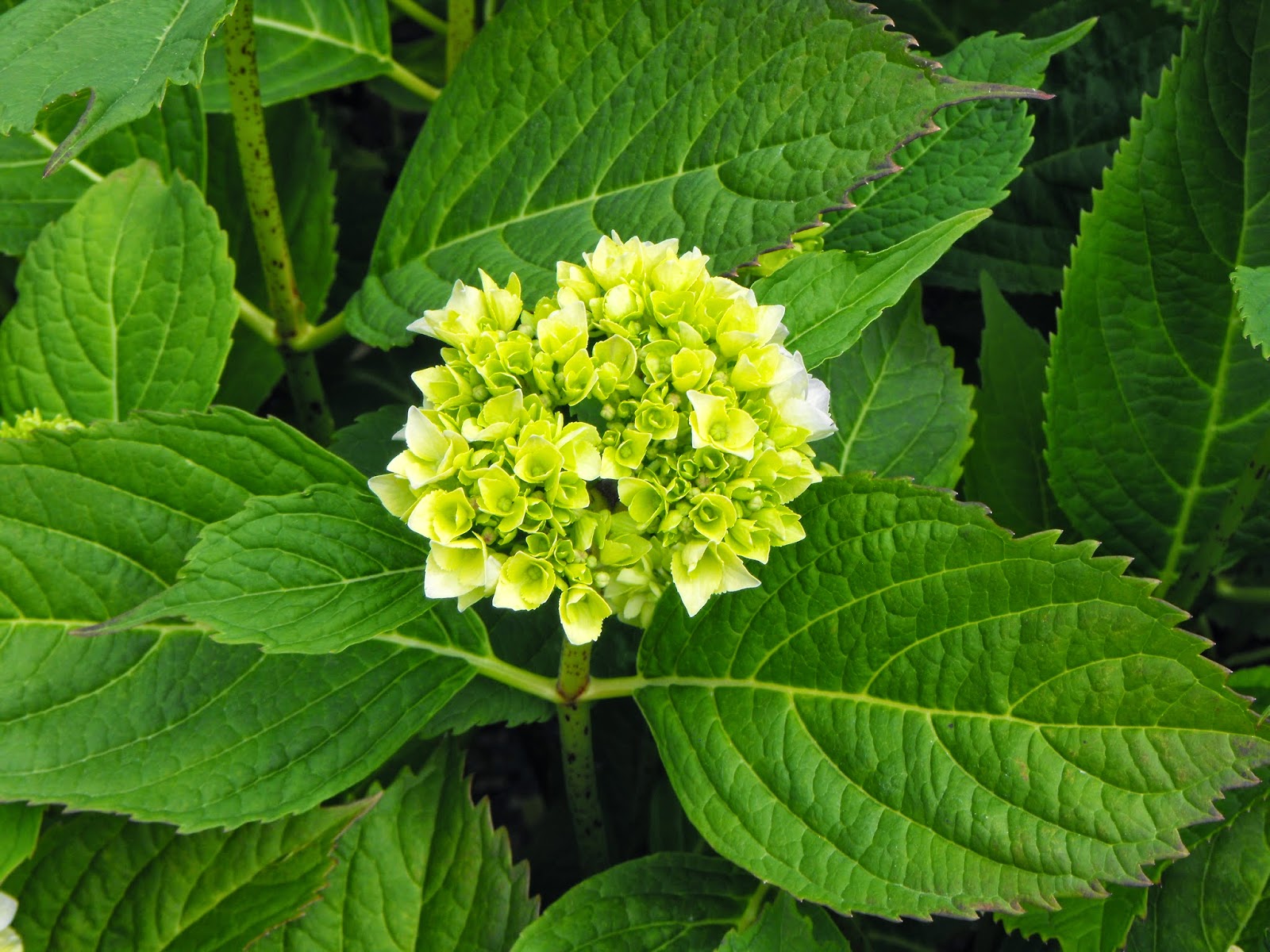 The dye colours that were used with this warp are Scarlet and Old Gold Procion MX Dye.  The scarlet dye comes out more pink than red but on the cotton ties that I used to hold the warp threads in place, it is redder.  I don’t know if you can see the difference in this photo. 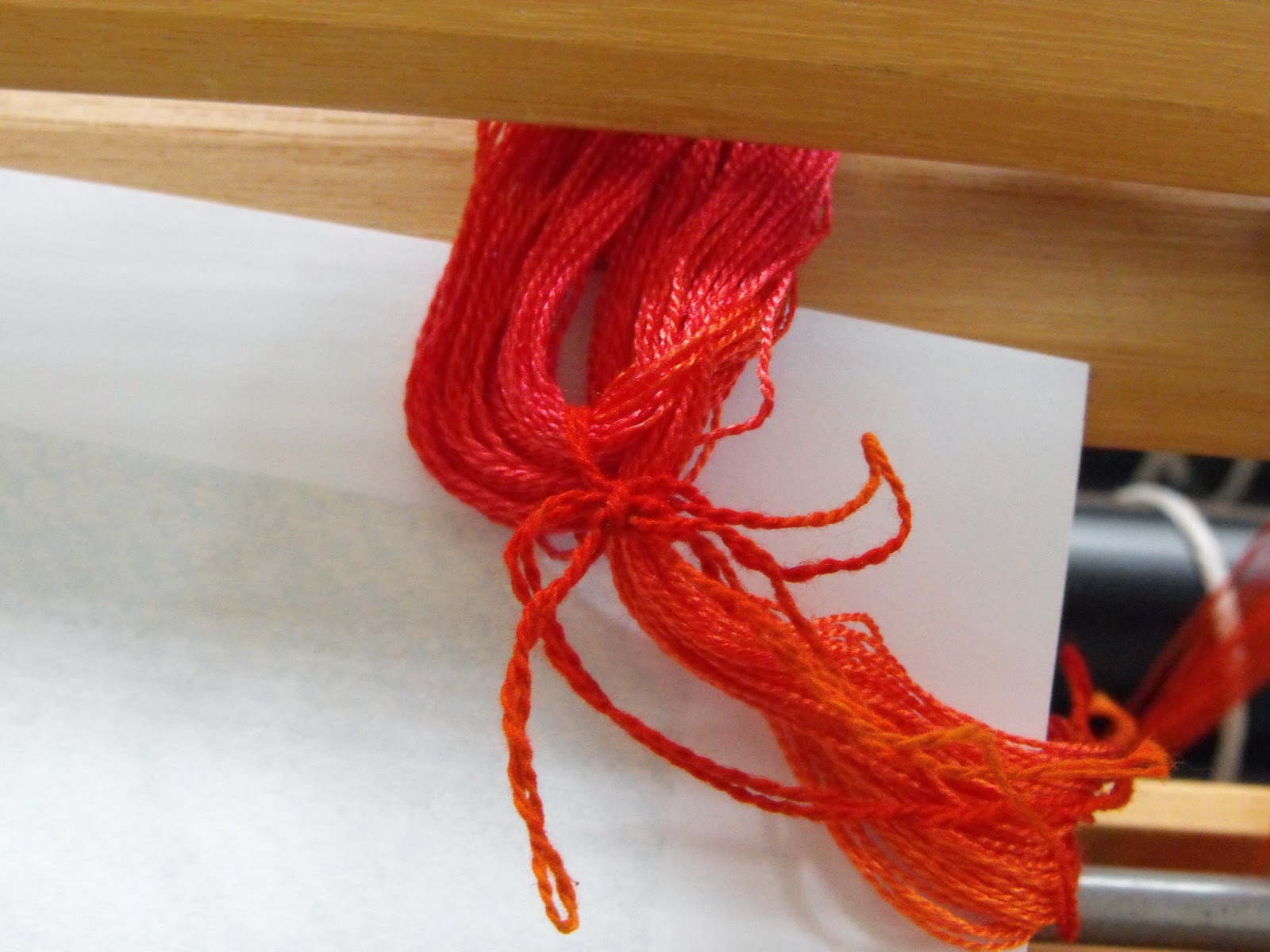 This silk warp was made up from the last bits from the 4 skeins that we used to make the warps from last summer’s dye day so it was a little short of the number of ends needed for a scarf.  So I made another warp and added about 40 orange Tencel threads to be interspersed with the silk. 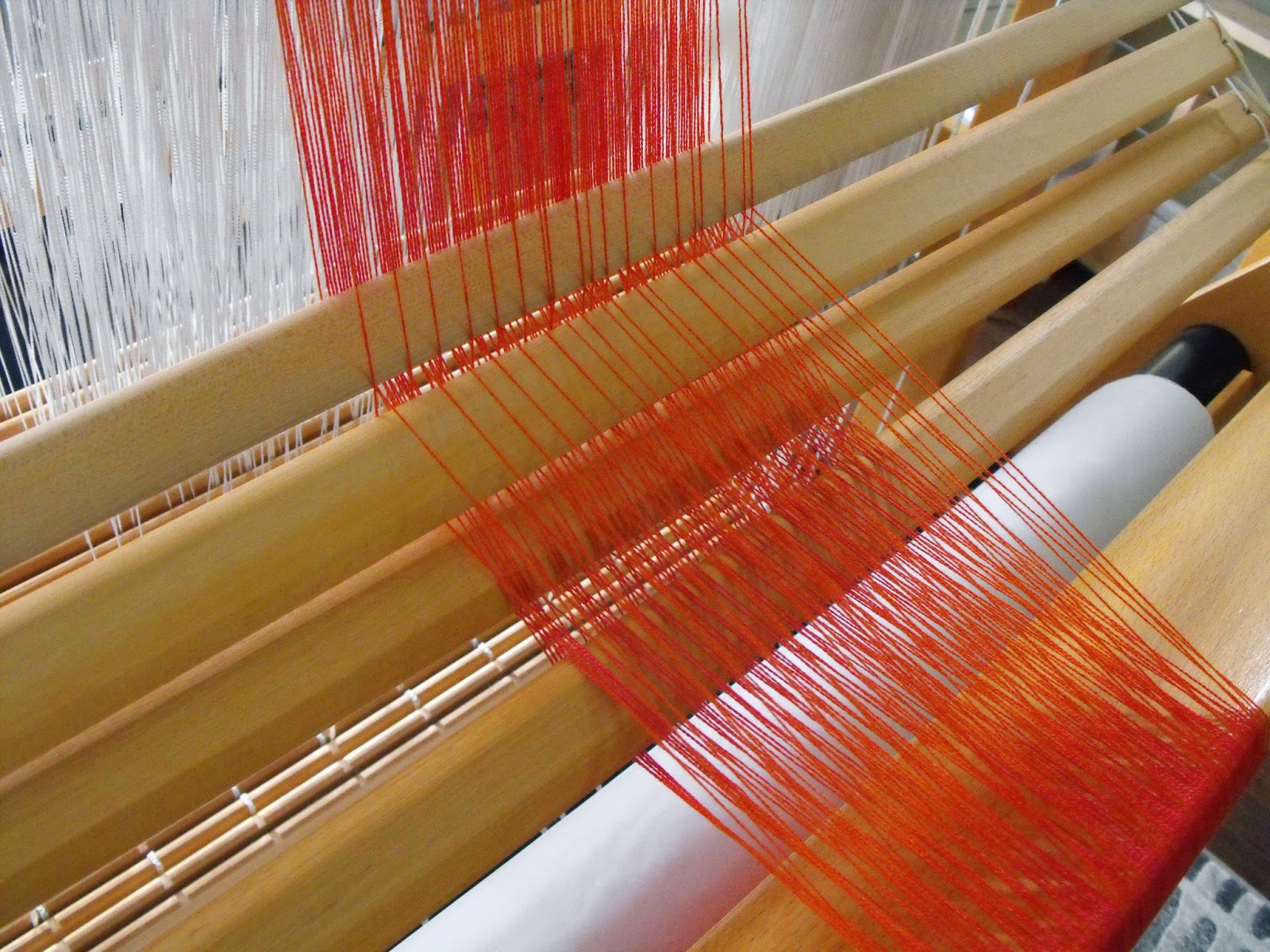 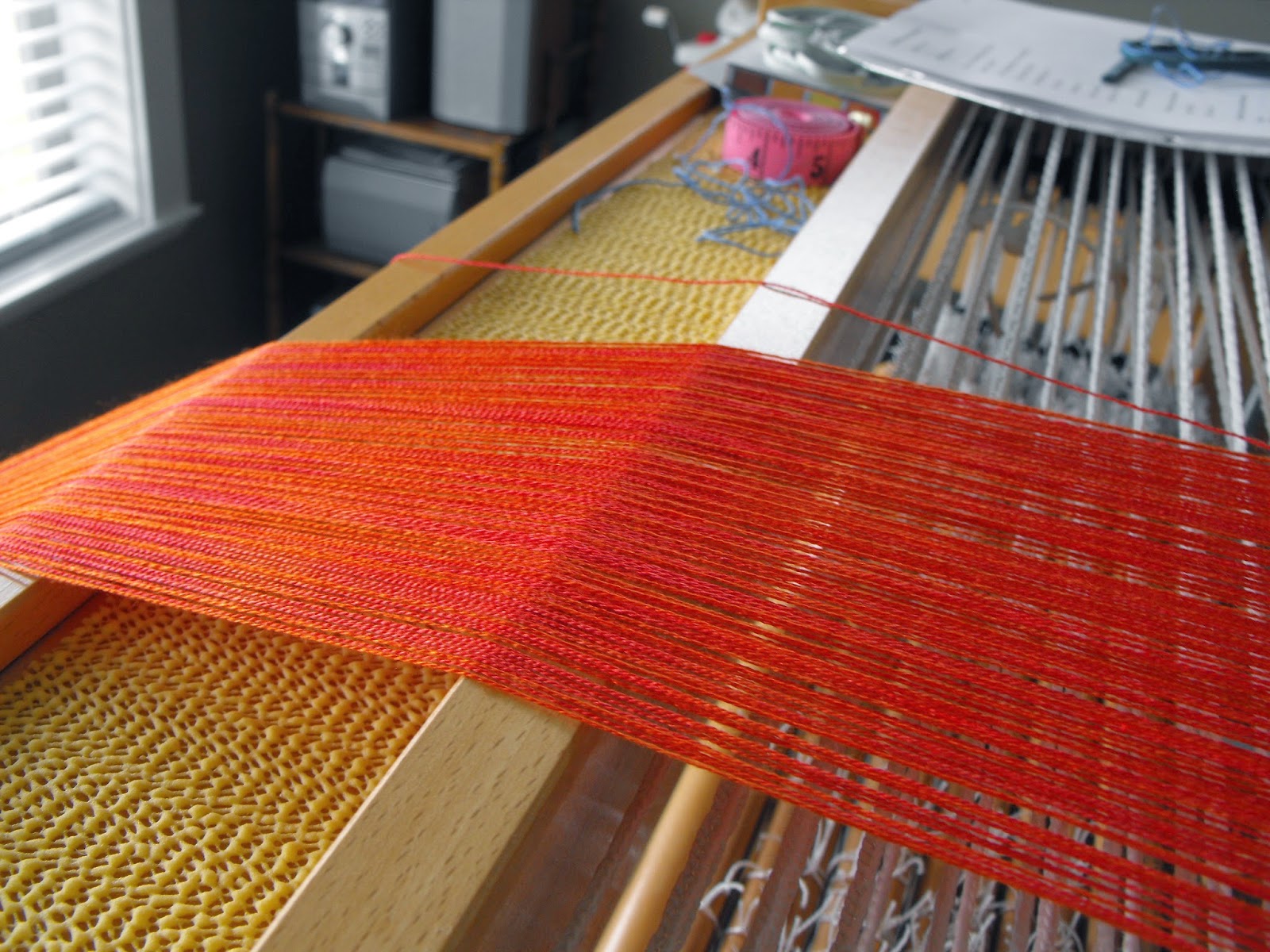 The orange Tencel really blends well with both of the silk warp colours, you can't even notice them!  What these threads did do however is blend everything together. The subtly painted silk warp looks like a single colour Salmon when viewed from a distance.  The scarlet and old gold of the silk warp are very similar in tone and when I painted it I did it fairly closely so there isn’t a lot of separation between the colours, maybe two or three inches at most.  Can't wait to see how the scarf turns out! 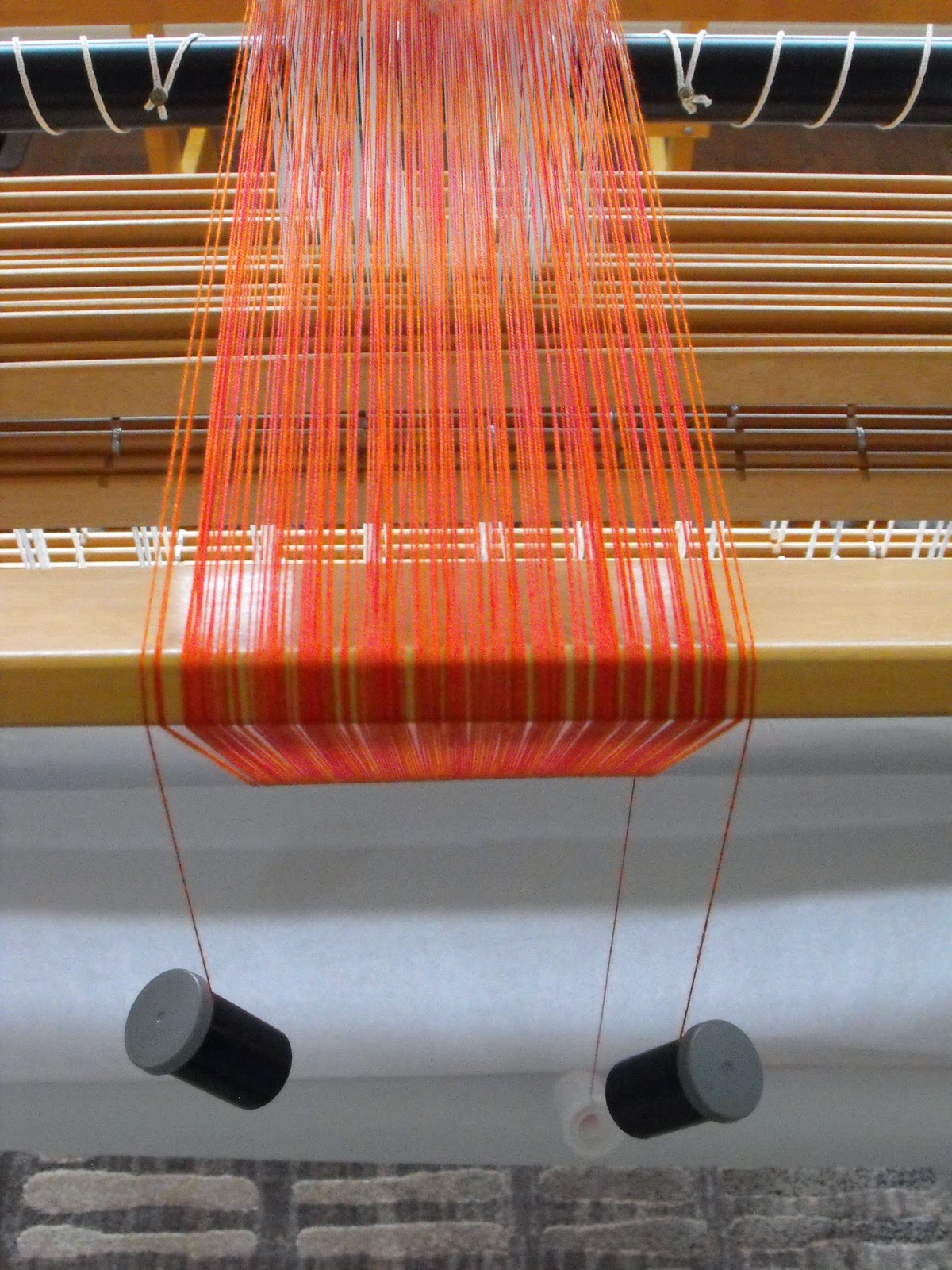 Pretty picture to end the post is a dragonfly that hung out on the bedroom screen for a couple of hours.  She was big about the size of my hand. 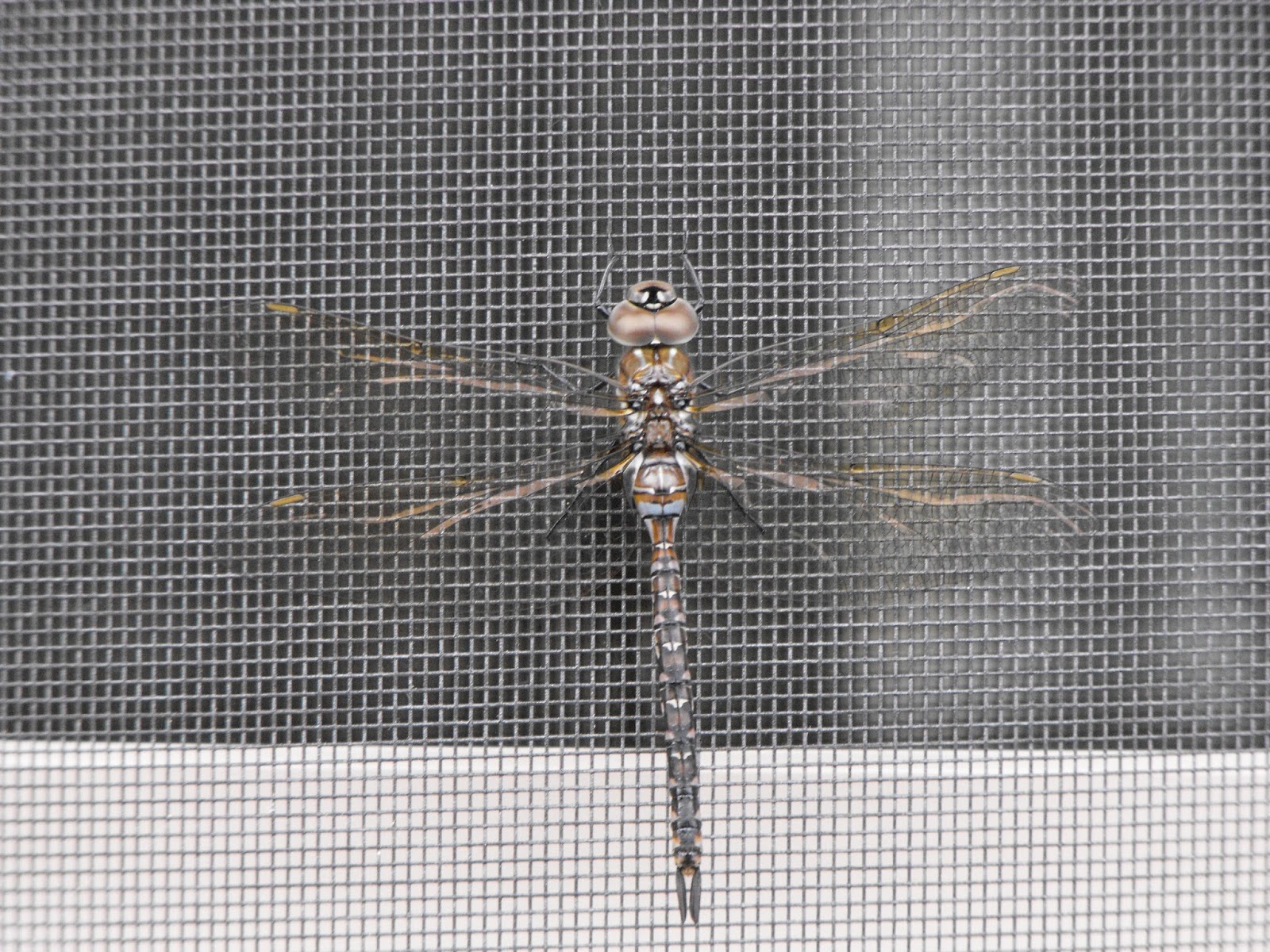 Mum and I have started to work on the painted silk warps that we did last summer.  The dyeing idea for this warp was to do an ombré effect, which means moving from dark to light shades of one colour.  So when I was dying this warp I kept adding water to dilute to dye every three to four inches.  Well it didn’t work but I got a nice even turquoise colour warp so that OK! 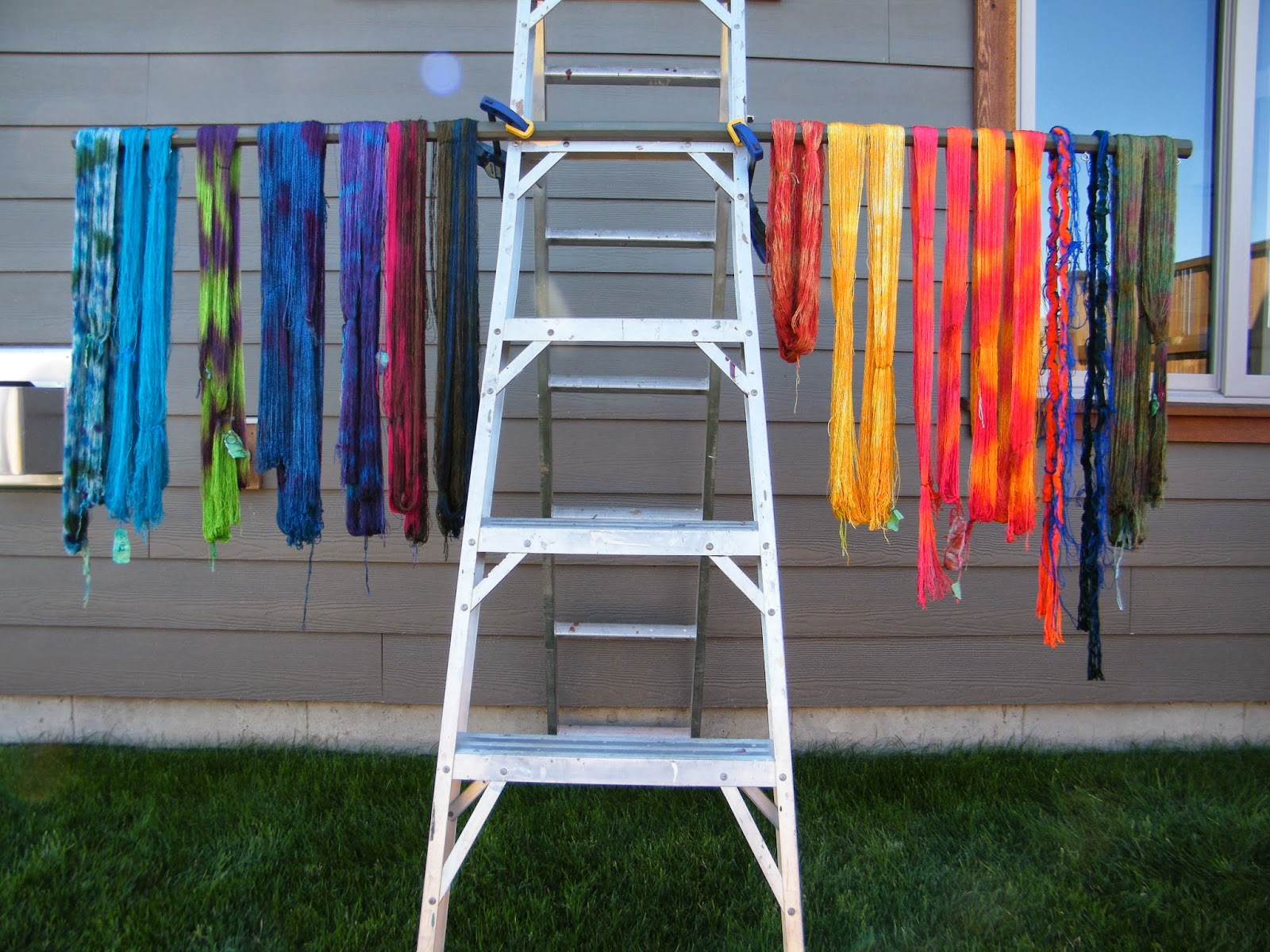 For the weft I went with white silk.  There was a choice of two, which never happens around here!  The one on the cone is a little bluer and the one in the ball a little creamier. 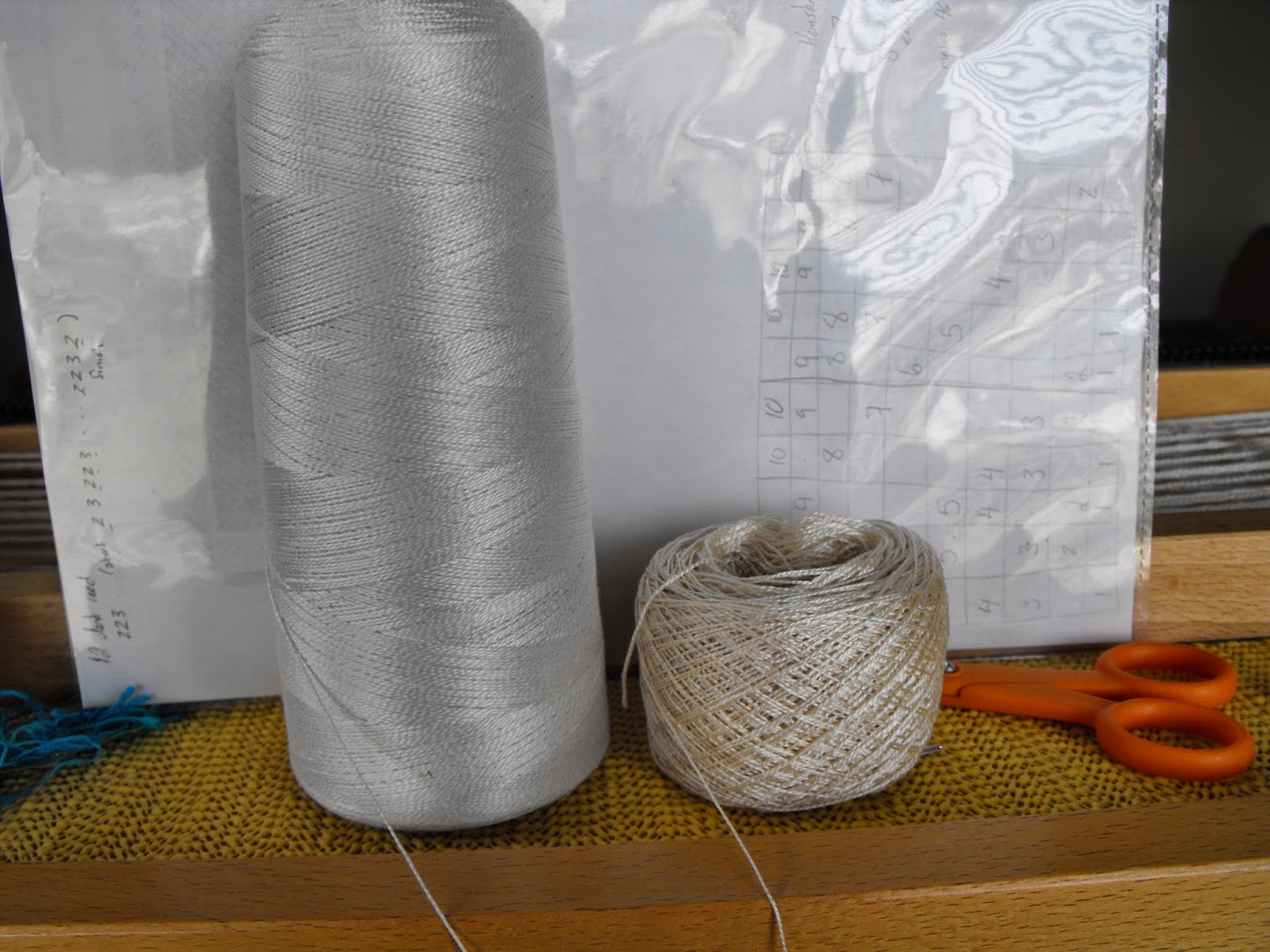 I did a test run of the weft choices and the blue/white silk on the cone won (the bottom of the picture).  I was afraid that the creamier silk would look dirty against the clear turquoise. 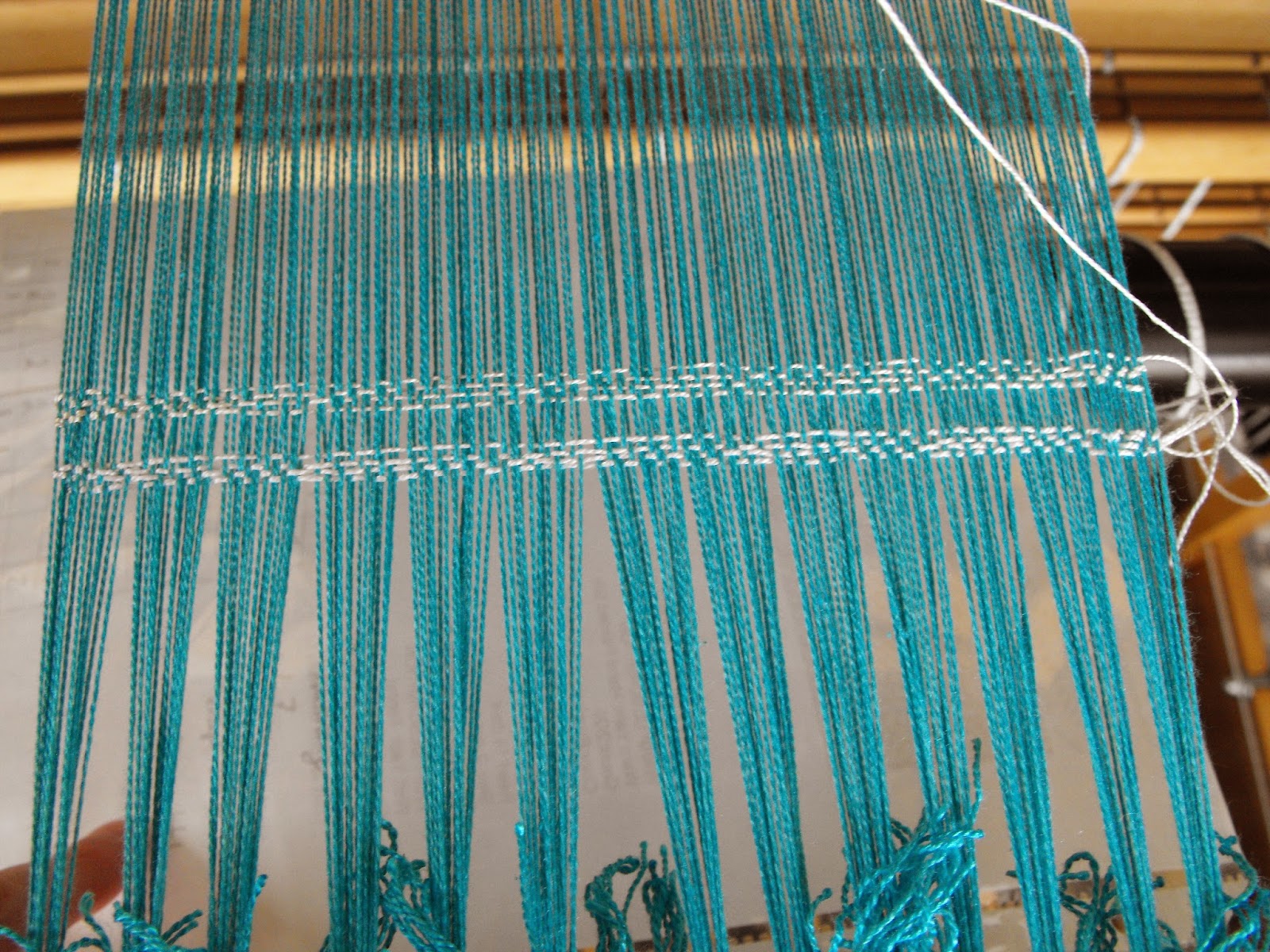 The colour of the warp reminds me of the summer sky so I went with that inspiration and found a pattern that looks like clouds.  It is networked twill that I am really partial to, and have used several times before; a real fav! 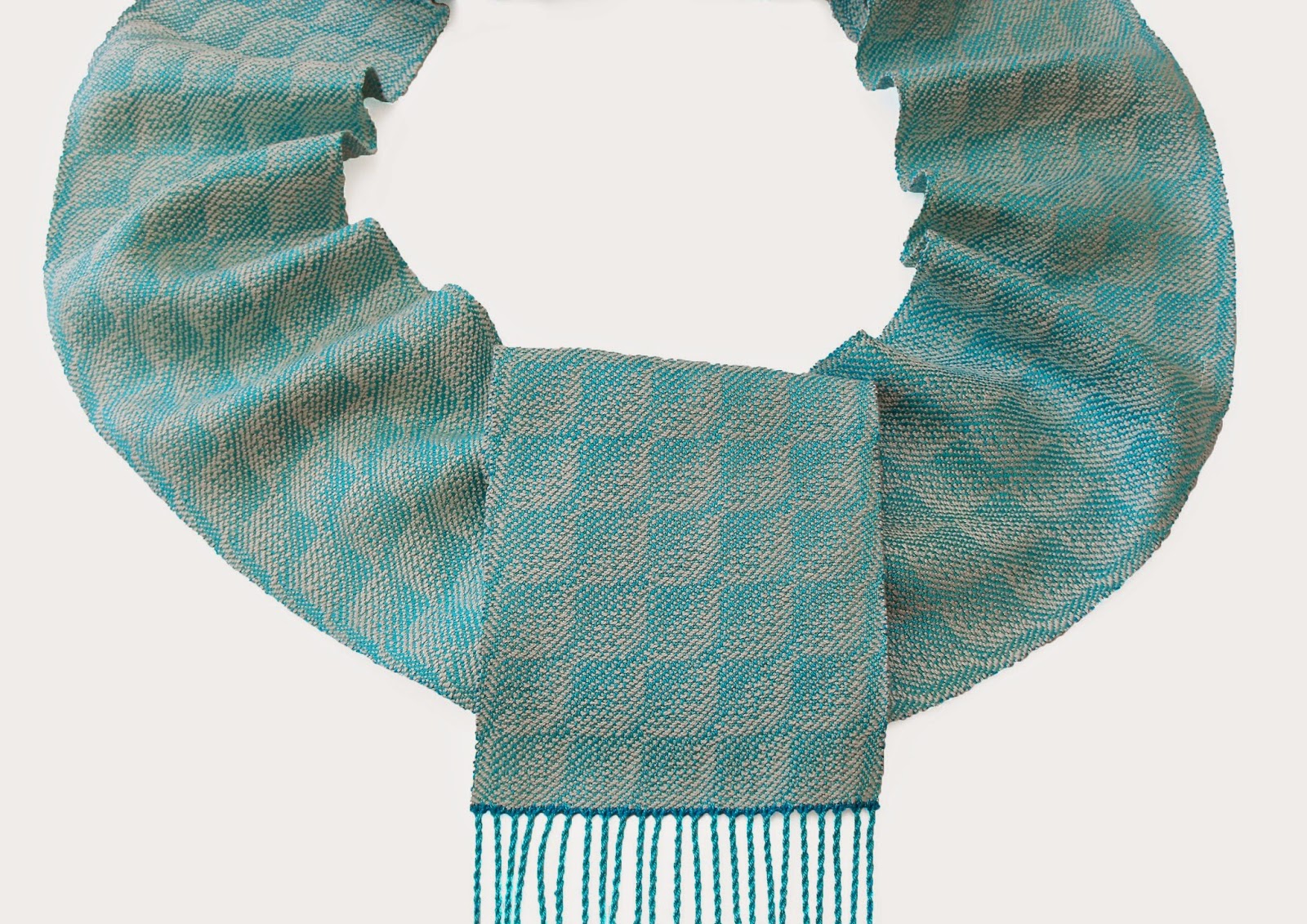 I have been taking new pictures of the scarves for WovenBeauty our Etsy store to update everything.  The scarf is shown in its 'natural habitat' ~ around the neck of a jean jacket and it looks great!  For Sale. 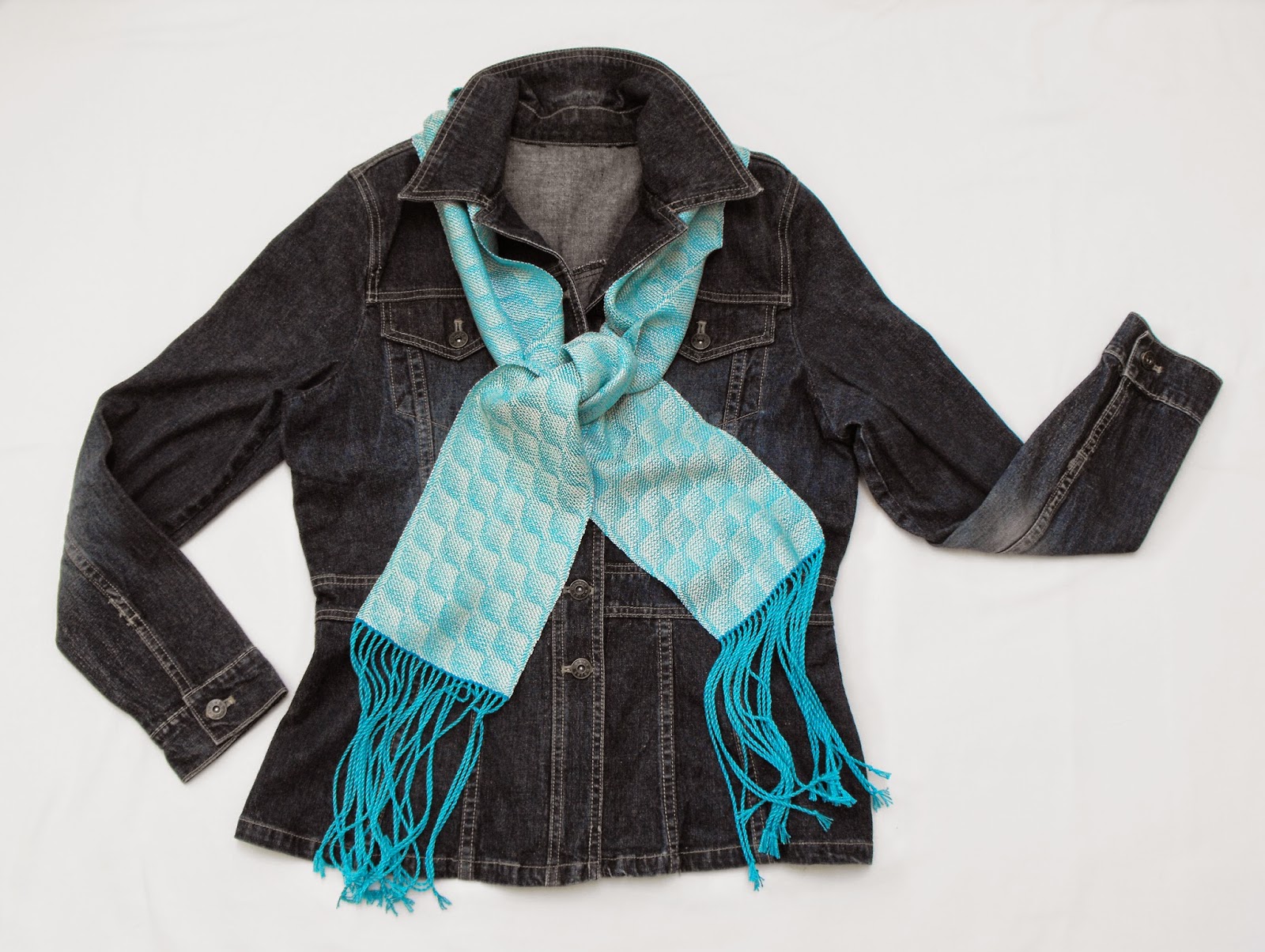 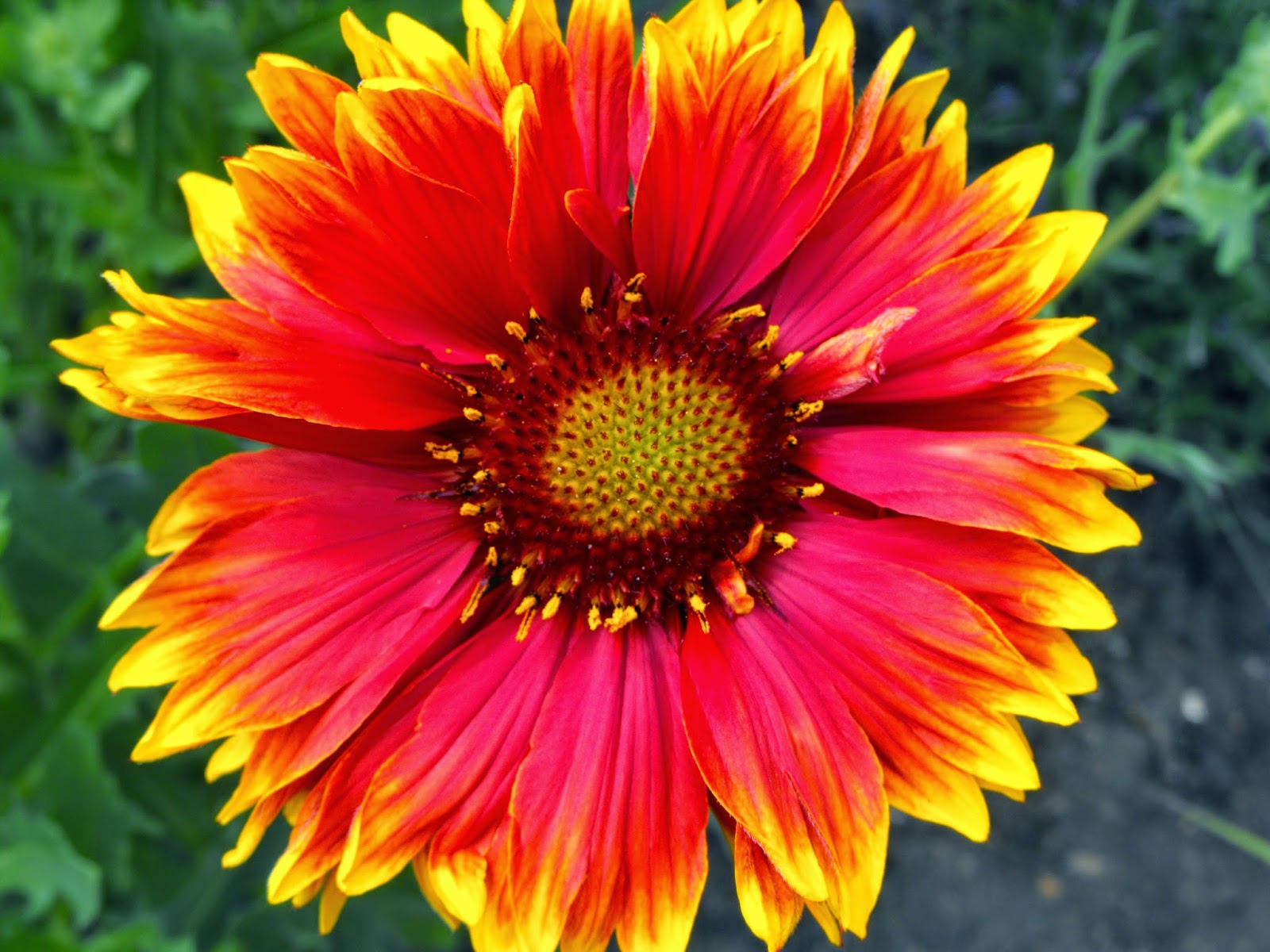