I thought that the piano scarf would be a great addition to our Esty store, Woven Beauty.  Esty is about unique handmade items and this piano scarf is it in a nutshell!

I wanted to try something completely different with the piano scarf (as always!) so instead of using chenille I decided to use rayon as the warp and weft.  I thought that it would give the scarf a lovely shine and drape. 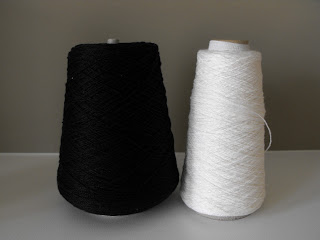 I started weaving and l didn’t like the look of the rayon at all as weft.  The ppi was correct but it looked too loose and I was afraid that washing the scarf wouldn’t close up the mesh like texture.  I also thought that the scarf felt terribly rough. 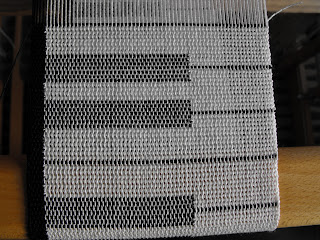 The scarf looked gray and washed out from a distance, instead of the dramatic look I was seeking.  I also didn’t like the spotted look of the black keys, so all in all ~ not what I wanted. 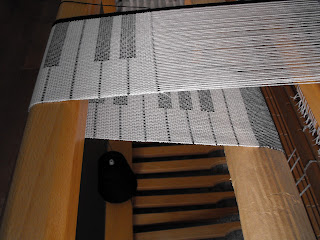 I did what I seem to do every time lately and unwove the scarf and started again.  I used chenille as the weft and I was so much happier.  The chenille fills in the warp and it is much more forgiving when placing the keys, it also enhances the strong colour blocking that I wanted. 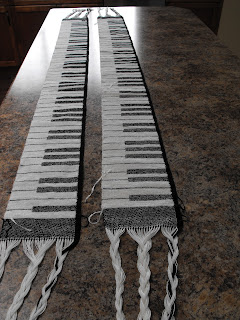 The chenille worked much better than the rayon but I do prefer the one hundred percent chenille piano scarves that I did previously.  One of the thoughts about using rayon was that I could have a fringe but again I prefer the look of the our first piano scarves with the point at the ends.  The photo shoot for the piano scarf was a little tricky, I wanted to show off the fact that the scarf has all 88 keys.

I like the look of the piano scarf but I always forget how long it takes to weave and how finicky it is using the clasped weft technique.  But it is worth it for the end product as it is completely reversable and that can't be achieved using double weave or summer and winter. 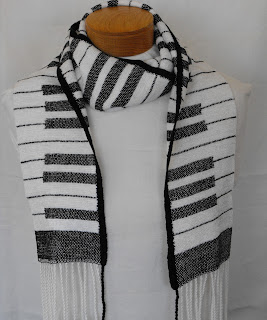 The scarf can be found here on Etsy if you'd like to own it!
Posted by Ngaire at 10:55 AM 2 comments:

We have been really concentrating on getting the Esty shop loaded with inventory.  When we first opened the shop we were photographing all the items on a grey background but we noticed that the majority of people on Esty who were being featured on the front page were using a white background.  So we tried some items on a white background and it made a huge difference! We are retaking all the photos – it is a lot of work! 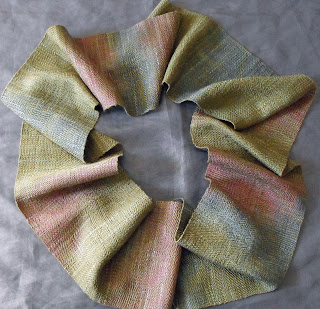 Above is before on a grey background and below is on white background. 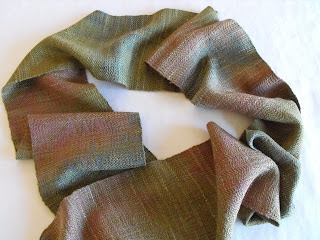 But there has been some weaving going on too!  I put on a 2/8 navy cotton warp enough for two table runners.  I like using navy instead of black because navy adds a warmth and depth of colour to the finish product.   The weft for the first runner is a lovely leaf green cottolin.  It is hard to get a good photo of the colour, but trust me it is pretty! 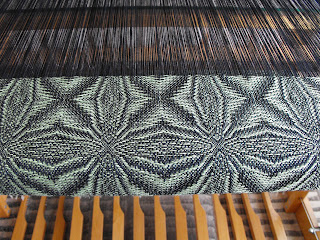 The pattern is a fancy twill on 8 shafts; I really like the large boxes and strong diagonal lines of this pattern.  I had reached the halfway point, about 30 inches, when I noticed it – the treadling mistake! 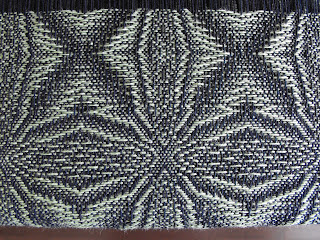 I had written down the pattern wrong, I had transposed two numbers a 78 instead of 87, so the entire piece was wrong.  I did the only thing that I could – I unwove the runner.  It is much faster to weave this pattern then it is to unweave!  I had to take it back all the way to the 2 inch border.  But it was totally worth it as the finished runner is stunning. 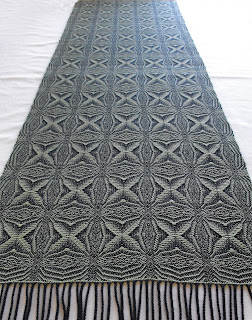 The green runner went up on Esty last week and it sold this week!  Woo Hoo!
For the second runner I changed the treadling so that it would be different from the first runner.  I made a two diamond repeat that is really pretty.  The weft is bronze linen that makes a dramatic statement for the runner. 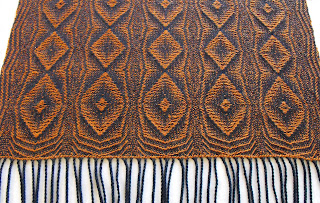 Unfortunately I ran out of weft before I got the desired length that I had planned for but it will make a lovely centrepiece for someone’s table.  Here is the Esty listing for the bronze table runner. 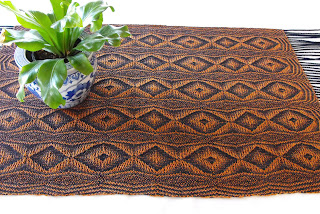 I really enjoyed weaving these table runners - so much so that I have put another table runner warp onto the loom!
Posted by Ngaire at 8:37 PM 4 comments: