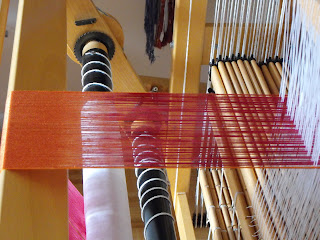 Having a new loom made me want to put on a special first project. The painted silk warp that I did in the smooshed method was the prefect choice. Not only was the painted warp barely dry but the vivid colours really called to me. The warp is 2/20 silk in orange and raspberry, very bright and cheerful. 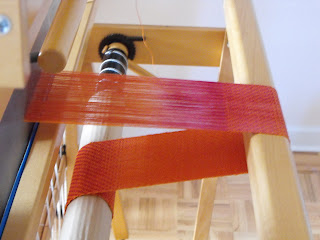 The weft is silk singles with a little slub in brilliant orange. It was also painted in the marathon dyeing day. To make it easier to fill the pirn I placed the weft ball in a mason jar. 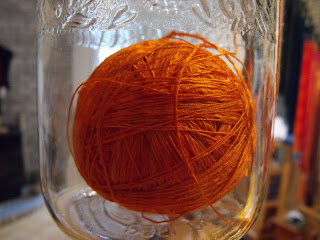 It was really hard to choose a pattern that would work with a painted warp; the best fit was an undulating pattern. The undulating effect helps to ease the transitions between the two colours in the warp. Also I wanted a 12 shaft pattern to give the loom a good ‘shake-down cruise’. 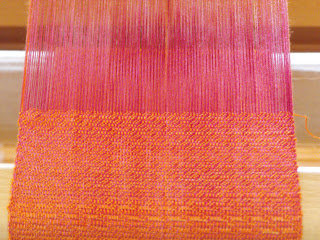 On the top the scarf is more weft dominate – lots of orange but the underside is more warp dominate. The raspberry really shows up well. 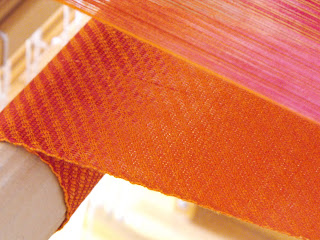 Here is a closer look at the pattern. The picture is showing the colours a little darker than they really are. 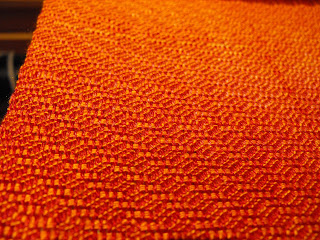 I am really enjoying using my new Louet Spring Lola. It’s a great loom which has an amazingly large shed because it is a counter marche which pulls the warp threads both up and down at the same time. 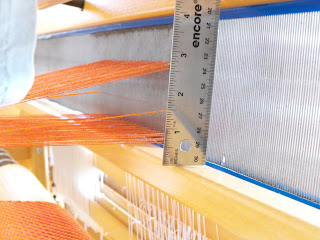 I’m finding the treadling really easy because once you push the treadle down it stays down so there’s a lot less labor involved, meaning I can weave longer! 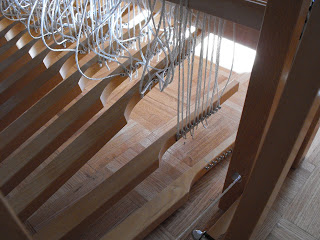 So good loom, good weaving and a good time!
Posted by Ngaire at 6:29 PM

The orange and raspberry look great together!

But I'm a little confused. Is this a countermarche loom or a dobby loom?

This is the right scarf to weave in grey November. So cheerful!
And I am sure your new loom is happy with it too!

It is a new loom, a Louet Spring which is a countermarche loom.

Hi there - I love the colours ! The draft looks interesting but can't quite decide what it is ?
The Spring is great isn't it, so easy to use. Hoping to get my extra four shafts very soon to make it up to 12 !

Hi Ngaire!
I saw those warps you and your Mum 'smooshed' up close and in person and the colours are amazing!

The warp looks so electric and appealing!

I'm so happy that this new to you loom is working so well for you. Its the right loom and fit for not only the studio space, but you too.