There have been big changes in the studio in the last two months. We decided to put the AVL Avril up for sale, as it did the same job as the Leclerc Minerva. We also felt that the amount and weight of the dobby bars really limited the length of pattern repeats we could do. So the AVL sold and I was getting used to the Minerva again, back to 8 shafts. 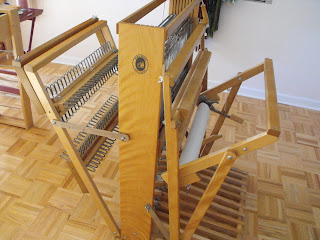 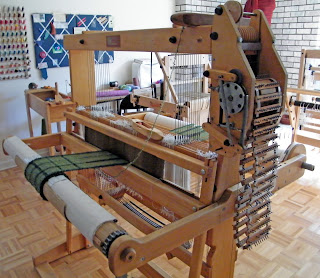 On the Left is the LeClerc Minerva and on the right is the AVL Mechanical Dobby.

On the last day that Susan (Thrums) was here on her visit she received an email about a Louet Spring for sale on Vancouver Island. Mum phoned the lady and bought it within 10 minutes of Susan receiving the email!

So we have a new addition to the studio . . . Lola, Lily’s (Mum’s Louet Spring) older sister! 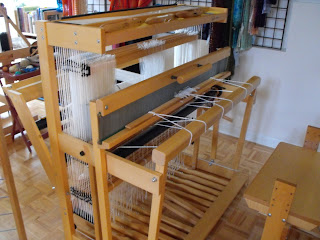 There are some differences between the two looms. Lola is older as she has a lovely amber honey colour. She also has silver screws instead of the black ones that Lily has. 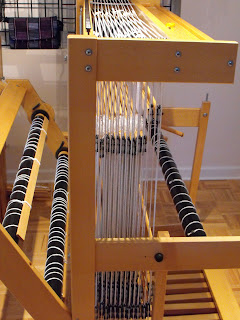 The front brake is different also. 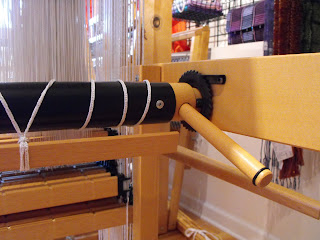 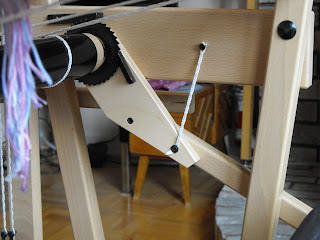 On the left is Lola and on the right is Mum's Lily ~ Lola has two warping beams and dual back beams. The second back beam has a tape measure attached to it, a really handy thing even though it’s a bit faded. 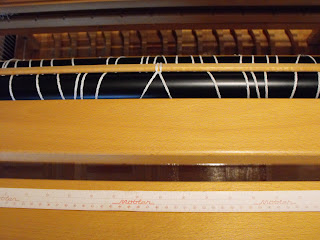 Every lamm, both upper and lower had a piece of Texslov attached, it took three people an hour to take them off, and they had to come off because the lamms needed to be moved. Also it was really confusing to know which lamm to button up to the treadle since there were two for each. 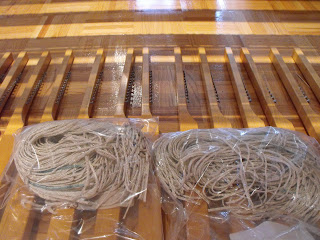 The loom was set up to weave as a counter balance system with a sinking shed, I wanted to put the loom back to a countermarche as it was intended. Thankfully I had Mum’s loom to use as an archetype so after some measuring I knew that I needed to move the shafts up about 4 inches, the upper lamms up 4 inches and the lower lamms down about 6 inches. 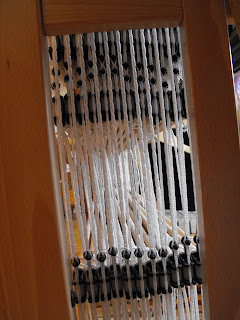 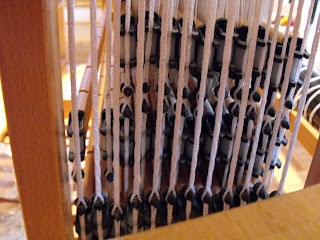 On the left is the previous set up and on the right is the new set up.

It was really painful to move all the pegs, there was 4 per shaft with 12 shafts, plus 2 per upper lamm and 2 per lower lamm making for a total of 96 and two painful days and completely swollen fingers and thumbs! 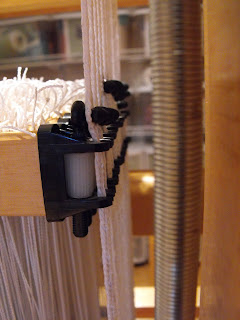 The new loom is already in use and it has been a delight to learn the workings of a 12 shaft countermarche loom. Sadly to make room in the studio we’ve had to sell Minerva. She will be going to a new home in Washington State on Orca Island.
Posted by Ngaire at 7:42 PM

That was quite *exciting* how that the new loom came about and so fast too! I was thrilled for you! A 12 shaft loom that is easy to treadle and not take up a large foot print? How could you say no?

I can appreciate that the resetting of your loom was tedious and even painful, but now you know full well how to keep your loom in perfect alignment and get the best from it.

Having seen first hand some of the beautiful weaving you have done on other looms, I'm looking forward to seeing what you have chosen for your first project!

I'm not sure this qualifies as a comment, it's more a question - but I can't find any email address for you, so I'm trying this approach and hope you don't mind.

I'm desperately in need of help with my Minerva, which appears to be identical to yours, except that mine has only a single, plain back beam. I've woven on four shafts on the loom with no difficulties, but I have an 8-shaft warp on it now and I cannot get a decent shed! LeClerc's Warp and Weft book indicates that on a jack loom, the path of the warp threads should dip from the back beam to the heddles, then rise slightly to the breast beam. My warp does the reverse: rises from the back beam to the heddles, then dips to the breast beam. What happens is that when I press on a treadle, the affected warp threads rise -- but the un-tensioned threads go entirely limp, cling to the rising threads, and create an impossible shed. I've written to LeClerc asking about the direction of the warp, but they just say my tension must be wrong or my tie-up cords uneven (neither is the case) and provide no comment on the warp's path.

Do you have any ideas about what might be wrong -- or what I may be doing wrong? I'd be eternally grateful for suggestions!