I joined the Jane Stafford Textiles (JST) tea towel exchange on Ravelry last month, mostly because my friend Susan suggested it, but also because I just love exchanges. I am the exchange coordinator for the Guild of Canadian Weavers and I find it so exciting to see what weavers out of my area are producing.

The first participant to post her colours chose some lovely yellows, greens and black, her inspiration was a beautiful photo of laburnum flowers. So, running with her flower theme I decided to use the lilac bush in my garden with pink tulips growing under it as my inspiration. Not wanting to reinvent the wheel, I used the same pattern as I used in my Stainless Steel tea towel warp, just changed up the colours and the colour placement. 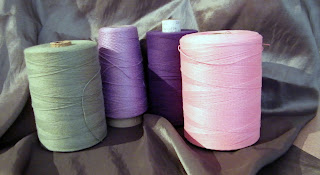 The tea towel exchange called for 6 towels to be sent to the coordinator in February, so I pulled a 13 yard warp so that I could have a few extras. And being one of the ‘better too early than too late’ group I started right away. 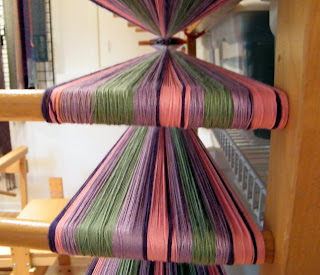 I used a new to me warping board, a 14 yard Leclerc and although it did the job, it had a hidden design problem. 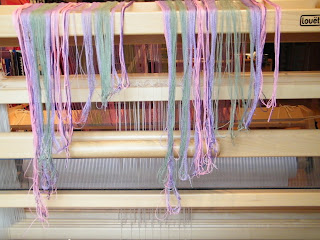 I pulled the warp in two separate bouts, and as you can see from the photo, the pegs on the warping board canted inward as the warp was added. Seems that as I piled up the warp, they just kept pulling in…..I lost almost 10 inches of warp from the first pass to the last over the 13 yards! You can clearly see in this photo the start of each bout and the end....amazing. This is not something that has ever happened to me before, so I don't believe that I pulled too tightly as I made the bouts, just bendy pegs I think! I’m going back to my old warping board, that’s for sure! 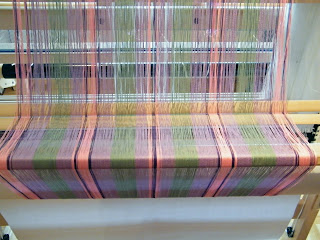 The warp did pull on beautifully though and I just love the look of the warp through the built in raddle on Lily Louet! 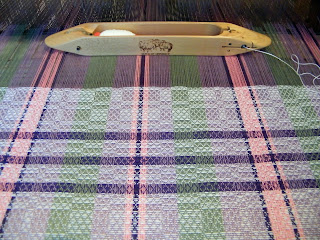 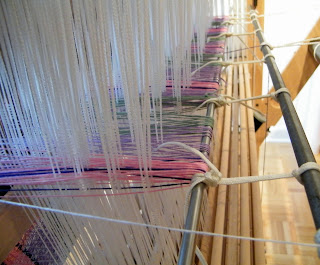 I did cut the first 2 tea towels off the loom to take to a guild meeting, and after losing that bit of warp needed to retie, and the warp loss from the warping board, I ended up weaving right up to the heddles to get towel number 12. I find it amazing that my Louet Spring can still give me a great shed when I weave this closely! 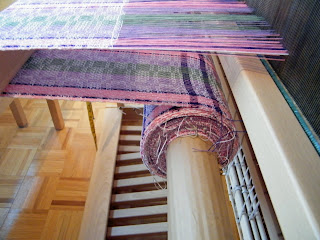 Here are the final 10 all snug and happy wrapped around the front beam. I have taken them off the loom and washed them, so now the hand hemming begins!
Next time I’ll show the finished product.
Posted by Lynnette at 10:58 AM

I love those colors. Very pretty!

Lovely colours, seems a little like spring to me. Maybe i'l join an exchange one day too. She must be very pleased with them.

Gorgeous colors! I have not wound a 14 yard warp before but I have read about bendy pegs.

what beautiful cheery colors! I had that happen on my first warping board although not to the extent you did - mine was only a few inches different - got rid of that board and hubby made me a new one with very strong pegs.

I had a Leclerc warping board that did the same....it's a coat rack now. Lovely colors!

I like the idea of using your garden to get color combinations,...gotta try that.

My current warping board can leave about a 2 inch difference if I do multiple warp bouts. Annoying but nothing too serious (yet) Clearly a new one is in order soon.

Love the colours and pattern! As I'm in the exchange too, perhaps I'll luck out and get one of yours?
Sure hope so!

you are a fast weaver!
the towels you created are wonderful!

Yes, the built-in raddle gives you a really gorgeous view of your warp, doesn't it! I love your colour scheme.

So lovely. I am a Jane Stafford fan. I have woven many a tea towel with her lovely yarn. Still have many samples from a few of her workshops I have taken.