I enjoyed my last tea towel warp so much that I immediately put on another. I chose a colour sequence that I thought would appeal to people with stainless steel appliances, so black, white, light grey, stone and just a hit of red. 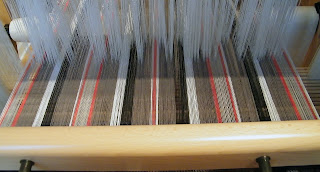 I created this draft based upon one of Russell E. Groffs’ patterns called Linen Squares, found in 200 Patterns for Multiple Harness Looms. 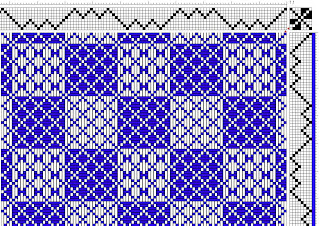 This is the original draft which I amended quite a bit. I changed the squares to rectangles by cutting out or increasing the number of point twill repeats. I then put my colour sequence onto ½ of the total warp threads necessary and then used PCW to mirror the colour stripe and block placement. I put on 7 yards of 2/8 unmercerized cotton, sett at 24 epi. I will get 6 tea towels 22”x36” plus samples. 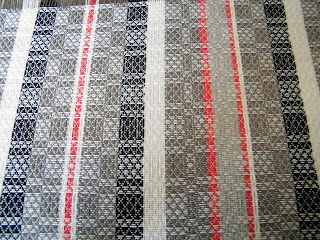 Above is my first towel using white weft. It’s pretty, but lacks the impact that I was aiming for, but still a nice clean looking towel. On the iPod was Vivaldi’s Four Seasons. 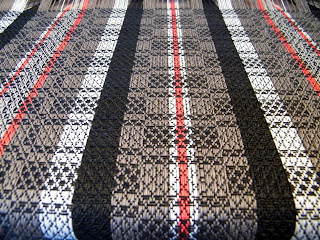 Now we’re talking….this is the black weft and it is exactly what I was looking for….there will be at least 2 with this weft. On the iPod was ABBA’s Voulez-Vous. 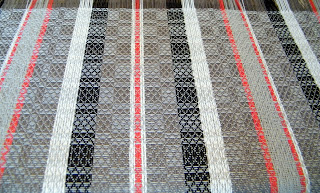 Just to make sure I give everything a try this is the light grey weft. It is lacking the impact of the black weft, but nonetheless it looks pretty darn good. On the iPod was Bond – Classified; for those who don’t know of Bond; it is modern light jazzy classical; or classical with a backbeat – just fantastic, rockin' strings! 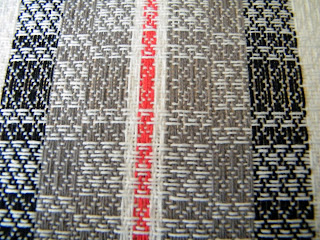 A close up of the centre of the tea towel with the white weft shows the lovely patterns created. 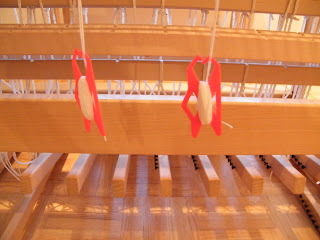 I found a new way to corral all those odd exta threads that happen when I pull stripes with odd numbers. Because of the back to front warp method I use, I like to have a clean fold to attach to the back beam, so I often carry and extra thread back to the beginning when I make stripes with odd numbered threads. These little plastic bobbins really do a nice job holding the extras off the floor so I can use them in the another project.

Weaving Words
Dornick Twill – a 1:3 turned twill which has the diagonals going in two opposite directions which do not meet and do not form a point. The long floats in corners of turning points are thus avoided which may improve the quality of the fabric. When it is broken it may sometimes be called Rough Damask or Damassé or even Broken Herringbone.
Posted by Lynnette at 1:27 PM

Ooooh! Very nice. I do like that black weft effect very much.

what striking towels!
I'm going to have to pull out that book and look at that draft and others - I love it.

They look great and I sure could see them in a SS kitchen. I just tried a lighter grey in one of my prayer flags and didn't like the way it muddied the colors, but the warp wasn't set up with greys either. I was going to hide the cone in the back of the shelf somewhere but maybe I'll give it another chance in something. ;-)

The black weft is really amazing!

I really enjoy reading your blog - lots of detail, very informative, great pictures! (I like that black weft, too.)

Beautiful! And I love the "Yes!" that popped into mind as I scrolled to the black weft towel.

That's a great draft! I'm sure the towels will appeal to people with modern minimalistic homes. I look forward to see the finished towels!
Happy Easter!

Wow! I just love them! the colors go great together they must look very good in a stainless steel kitchen.

Lynnette - that's another good draft ! You have gone tea towel mad !! These are so different to the 'spring' ones ! I know everyone likes the black weft but I think I like the grey one ! Wonder what is coming next !

These are nice towels! The draft is great and so are the colours! It must be such fun weaving them.

Hi Lynnette! What beautiful towels! I found your blog through Pinterest, and have found your entries very interesting and informative. Do you have any more information on those little red thread bobbins in the later photo? What exactly are they? I can't find anything like them anywhere. I use kumihimo pop bobbins and an S-Hook for weight for the same purpose, and these look like they would work better. Thanks!