I’m still working on my Woven Shibori scarves, slowly, slowly…. I put on enough warp for four 70” scarves and frankly I should have known better, I’m a tad bored by it all right now. The bland colours and frankly they are just plain ugly at this stage of the game. 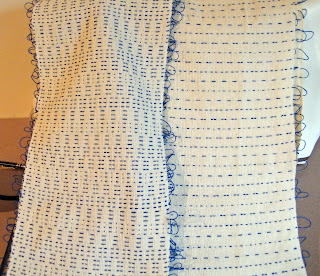 On the left is my first scarf, on this one I followed my pattern exactly. I wove a triple repeat of every pattern sequence thread separated by four tabby ground picks. This will give me a very furrowed and pleated design, hopefully! On the right is scarf number two, this scarf was woven with only one pattern thread sequence separated by 10 ground picks. This should give a similar overall effect, but with far less furrowing and will allow more colour to seep into the scarf. 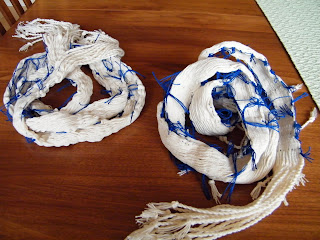 I have already twizzled the fringes for both scarves and have pulled and tied the pattern threads. Scarf one is pulled slightly tighter than scarf two. 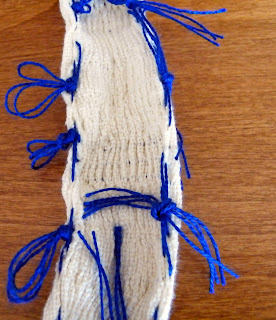 When I pulled the scarves I did an overhand knot on the right side and then pulled the left side to the desired tightness. Then I secured it with a shoe lace knot and trimmed the edges. I’ve found that if I leave the pattern threads too long it interferes with the painting of the scarves. At this point I’m planning on painting each side of the scarf a different colour. 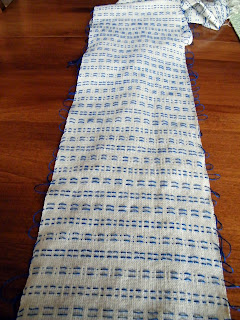 This is scarf number three off the loom and waiting for the fringe to be twisted. This scarf was woven with a double pattern thread sequence separated by four ground threads and then ten ground threads before the next sequence. This scarf should come in right between the other two both in patterning and in ridging. Well that’s the plan anyway! 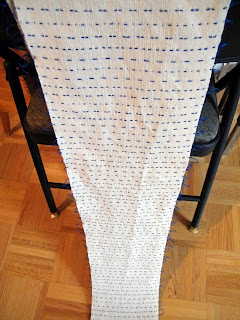 Weaving Words
Dimity – is turned 1:2 twill. It always has a diagonal.
Posted by Lynnette at 12:10 PM

Lynnette - I am fascinated ! Have never seen this done before, it all looks a bit scary and doing four does seem a lot ! Can't wait for next episode ! Dorothy

I can't wait to see your scarves when they are finished!!! Four scarves on one warp sure is a lot but I'm sure it will be worth it.

That looks cool. Maybe boring initially, but the end will be a surprise! Can't wait to see them!

Ooh! Can't wait to see how they turn out! (Also reminding me that I have a couple of shibori scarves all woven and waiting to be pleated/dyed - how lame am I??) I completely sympathize on the boring initially part... (Probably why the poor things are still sitting there!) Any thoughts on colors?

Okay, we are all sitting here waiting anxiously for you to finish..... drum rolllllllll. well? Well? anxiety!

It sure did my heart good to see you say you were bored because you are a weaving machine. It was nice to see you second guess yourself. I do it every project!