Making a Handmade Tassel to Finish a Scarf

The first scarf that I made needed some further finishing so it wasn’t shown in my first post. I didn’t really like the plain flat edge of the ends of the scarf so I added a fringe of black Tencel and some beads. It made the scarf much better, but was really labour intensive. 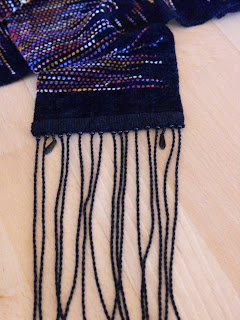 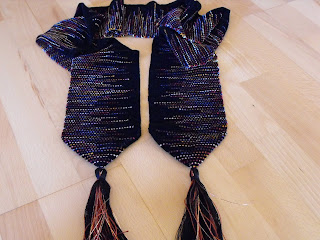 I had never made a tassel before so after some internet sleuthing I came up with this method. The threads are wrapped around a piece of cardboard folded in half. I built the two tassels at the same time so they would be the same as I was using four or five different threads in differing amounts, it could be hard to keep track. I used a mixture of cotton, Tencel, Orlec and shiny copper in different thickness and shades of brown and black. After the desired thickness is reached the loop is cut in half, the bottom of the cardboard, where the two pieces meet is where to cut. A piece of thread is then wrapped in the centre of the bundle and is knotted into place. The bundle is folded in half and about half an inch from the top it is wrapped to hold the halves together. The ends of the tassel may need to be trimmed but that is it, really easy and fun! 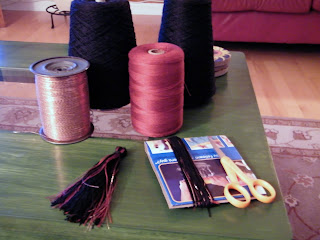 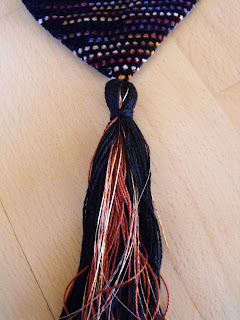 Here is the brown and variegated scarf, it is very subtle but is really pretty, and oh so very soft. 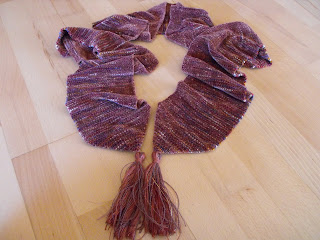 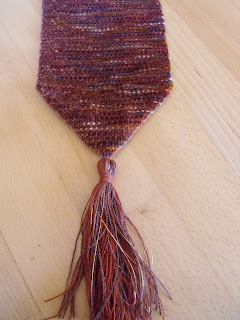 The brown and black scarf is exciting as there are little black dots that seem to magically appear, very nifty! 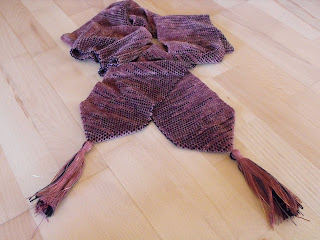 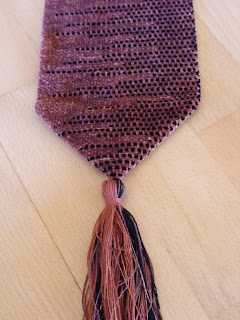 I really like these scarves and I am already planning on doing some more!
Posted by Ngaire at 10:34 AM

I Love the scarves ! You didn't tell us though how do you do the pointed ends ? The tassles are great and the instructions really helpful, I'll know where to come when I get round to making some !

I would also be interested in knowing how you made the pointed ends. Tassels were a wonderful idea!

Hi,
To answer the question - No weaving trickery, just the edges picked up and sewn into a point!
Ngaire

Your clasped weft scarves look great! I bet they are even better in person...
I have a chenille stash that would benefit from a long warp woven up in this style.

Thanks for the inspiration!
Susan

I started my own clasped weft scarf, inspired by these (using a couple different types of yarn), and I've run into a bit of a dilemma - I can't for the life of me keep the edges nice and even/flush. How do you keep your edges nice on these?

(I think it might just be the yarns I'm using - they can compress a lot...)

What a great idea, it's so decorative!

Totally love this! I won some lovely chenille from Susan's blog contest, and this is what I want to do with it!

I love weaving clasped weft but I have never woven with chenille. When I see your scarves I would love to tuch them. they look like they feel really soft. And the tassels are great.

Beautiful scarves! I really like your new pointed ends with tassles.