So, more towels, but my first kick at this particular can! The tea towels I chose to weave are white cotton with blue stripes; the blue stripes are made up of cotton and cottonlin in a random mix and with different shades. The pattern is M’s and W’s twill on 8 shafts and the five blue stripes are in various widths and used to pick out the medallions. 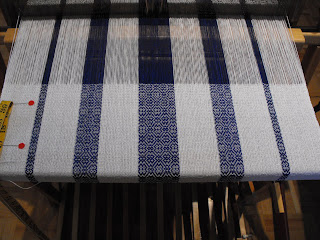 I had some trouble with these towels, I had planned on the towels being 22 inches wide; but after winding on the warp I noticed that the outer edge fell into the loom brake and got dirty. So even though I’m supposed to have 22 weaveable inches on the Minerva loom it was too wide. I had to cut off a half inch on both sides to make it work, so they ended up 21 inches wide and 36 inches long. I also had tension problems so the back of the loom was a jumble. 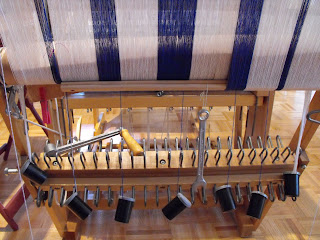 Before washing I was a little concern about the towels, they didn’t seem interesting and I don’t know, just plain blah. But after washing they became magical; the white panels are full of texture and the blue stripes are a clean and sharp counterpoint. 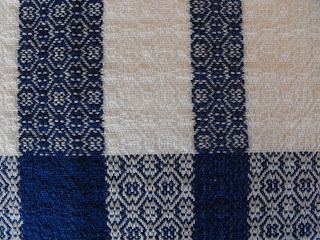 Every towel has a series of different sized stripes as a border. Below are only two towels, the others have not been hemmed yet. 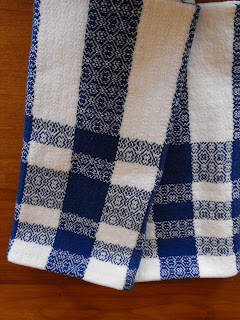 I liked the fact that each towel only took about an hour to weave, but would I do it again? Hmmmm, probably but on a wider loom!
Posted by Ngaire at 9:22 PM

lovely that blue and white. I think the people in Delft would have liked it, and nowadays will too. ( I live about 89 kilometers north from Delft) You are weaving so much! De you ever sleep?

These are incredible! Nice weaving!

I can only say one thing, just beautifull those delft bleu teatowels. I love them!

in spite of the problems you had they turned out wonderful!

Oh my! These towels are wonderful!!! I just love the variation in blues!!! ;)

The towels are beautiful, and the colors are so classical and lovely! I guess they'll fit in everywhere.

Lynnette - I love these tea towels, the m's & w's draft looks really nice. How have you made time to do these already !! What's coming next ?

Hi Dorothy - Actually I wove the towels but I have got Mum hand hemming them!
Ngaire

Maybe when you and your Mum do blog posts, perhaps say who's writing in the intro? That way you get proper credit :)

Forgot to tell you how much I like your new header. Cool!

Ngaire, lovely towels! And thanks for your comment re Minerva loom!

I adore these blue and white towels! Lovely pattern.