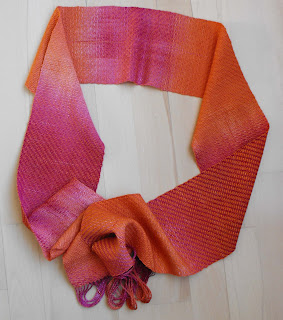 I just noticed that I’d forgotten to update you about the raspberry and orange silk scarf . My last post showed it on the loom, but now it’s completed. I’ve beaded the scarf with glass beads that mirror the different colours and shades of colours in the scarf. 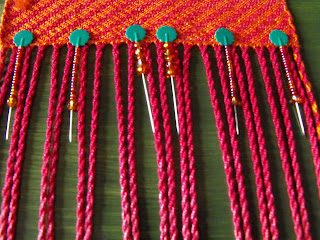 When I was smoosh dyeing the scarf I didn’t even think about matching the halves of the scarf and so I was delighted (read giddy with relief!) when I saw that it does mirror image. In the picture it looks like there is a white outline to the colours but it is just hue variations, paler tones. 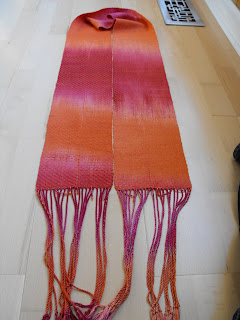 The scarf definitely has two sides. The warp dominate side is on the left hand side and shows all the lovely colours. The weft dominate side really shows the pattern. The pattern is a 12 shaft dropped tabby that looks like an undulating twill. The pattern repeat is quite small and it really allows the painted warp to show through. 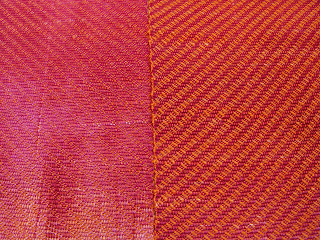 The process I used when dyeing the scarf also added interest to the scarf because the dye was applied with a lighter hand at the beginning. So the colours get darker along the length of the scarf. 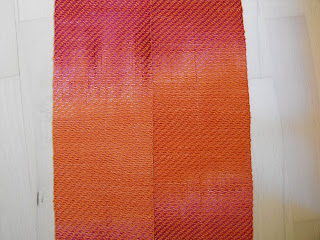 One thing that I would change about this scarf is that I would have painted the warp on more of an acute angle to make the colour patches more jagged. I could have pulled some of the individual warp threads to make it more jagged, and I would do that next time. But the scarf is still very beautiful and I’m really happy with it and looking forward to weaving smooshed silk scarf number two!
Posted by Ngaire at 9:12 PM

Great scarf. I learn so much from reading your blog. Fancy putting the beads on pins to see how they look - another must try.

The colours are still rich so your weave structure was a terrific choice!

I see from Dianne's avatar that she likes those colours too :)

Amazing colors. I love it.

I LOVE this scarf - really beautiful!!

Unrelated to your post, just a ?helpful? comment on your blog --- if you reduce the height of your header picture, I wouldn't have to scroll down to see if you have added new content, and when my computer ?helpfullly? shows me the front page of my most-visited sites, I'd know at a glance if there was new content and stop by immediately.