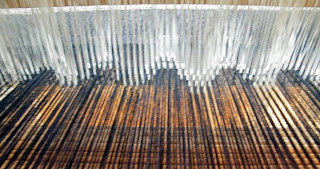 I love this photo, when these shapes appeared in the heddles, I really got a great foreshadowing of my yardage project. I put on 6 yards of warp 30” in the reed, alternating navy and black 2 ply sport weight weaving wool. 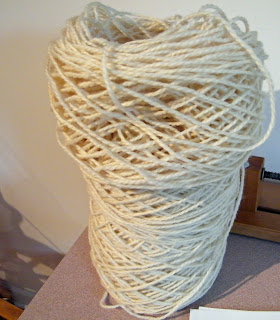 As I mentioned in my last post, the weft yarns I chose to use were quite different from each other both in colour and ever so slightly in grist. The only way I could effectively use them was to alternate picks as I wove to ensure that I used both wefts up at the same time and so that they blended in the cloth. 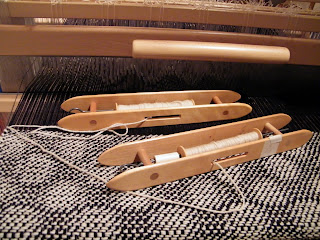 I kept each of the wefts separate by labeling one of the shuttles ‘dark’. This helped me to keep track when I wove in the evenings and the light was less than perfect because they really did look alike at first glance. I was lucky to have 2 Leclerc rag shuttles that had been modified for extra large bobbins, so I could really load up the weft. 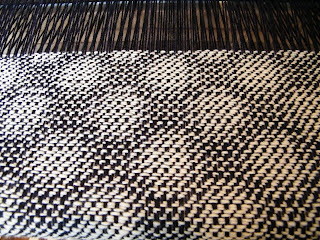 I have woven this pattern several times in the past as scarves, but modified to fairly large grist wool has made the spots less distinct, so I’m calling this yardage Polka Drops as the dots looks a bit splattered to me! This is an 8 shaft network twill created by Alice Schlein and found in Twill Thrills. 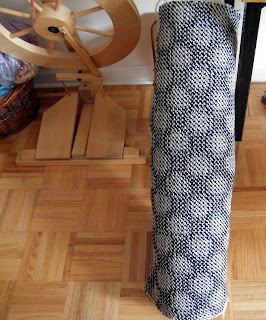 Polka Drops wove up quite quickly at 10 epi and 10 ppi, but I was definitely slowed down by the constant shuttle switching….what a pain! I was quite disgusted whenever I looked under my loom too….dustbuffaloes abounded. Seriously huge drifts of dark fibre everywhere I looked! The roll of yardage was really quite substantial and stood quite well on its own. 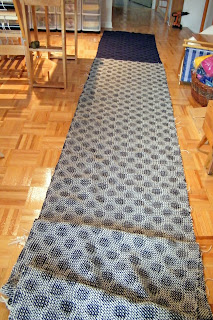 Here is Polka Drops unfurled…..I ran out of weft at 5-1/2 yards so I wove up ½ yard with a mid blue weft. I don’t think that my calculations with the McMorran Yarn Balance were off at all, I just didn’t anticipate the amount of stretch that would occur due to weaving under tension. Not sure what purpose I’ll get out of my wee bit of blue yardage, but the main portion is destined to be a 1952 style swing jacket….
Posted by Lynnette at 3:30 PM

Wow, a 1952 style swing jacket, with this fabric, must be wonderful. Can't wait to see the result.

Have a nice Sunday.

I imagine that once the yardage has been wet finished the dots will firm up some! (any idea how you plan to do that?)

I love the color and draft you chose... and like others who read this, we're looking forward to seeing the swing coat!

Hi there - what a great way to use up some wool yarn. the yardage looks great and I too like that networked draft in Twill Thrills. I hadn't thought beyond placemats though ! What patience to weave with alternate shuttles ! Hope we will see pictures of the jacket !!

That is really cool looking. and a swing coat will be oh, so stylish. Dustbuffalos! I thought they were extinct!

What they said! I think you are onto a winning combination of fabric and style. I do the shuttle labelling thing too, but mine's a red dot vs no dot!

You did a great job! I am looking forward to see the swing jacket