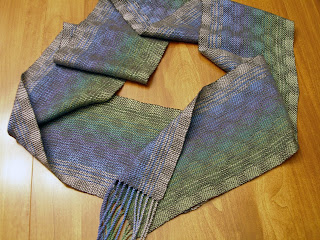 TaDa!!!! My first network scarf is finished and I’m in love with this weave structure! My understanding of network is that it's all about tonal values. Twills in general will give one tonal value over the entire cloth; networking the twill you can get 3 tonal values, light, dark, and mid tone. As you can see, the spots are light on one side and dark on the other, so cute! 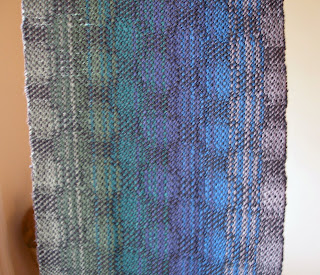 A real bonus for me is the amazing circles! I love the fact that I can get a circle from what is in fact a series of right angles – boggles the mind!

On my last post I had planned to weave my first scarf in this series with navy weft; but in the tradition of 'best laid plans' – when I opened my Tencel bin, the first thing I saw was a beautiful shiney, tightly wound pirn of this lovely slate grey! Serendipitously beautiful I think! 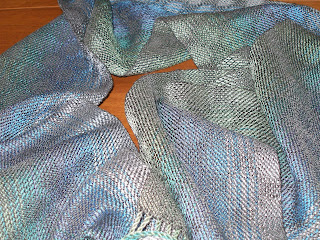 This is the photo with the truest sunlight colour, I have noticed that this scarf looks different according to the light it's in. I can't wait to see the navy scarf completed!
A Bit Of A Problem and how I fixed it, with a tutorial of the process. 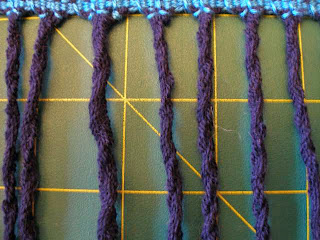 A very interesting problem arose after washing the Azure Canvas Weave Block scarf. The fringe that Ngaire had so carefully and beautifully fish tail braided completely buckled after the intense washing I gave the scarf to encourage shrinking. The end result is a very short, squiggly ratty looking fringe! 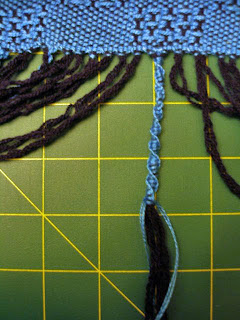 My first thought was to macramé the fringe to see if that would improve the look, and although it does look nice, it’s much too stiff for the lovely soft scarf – deep six that idea. 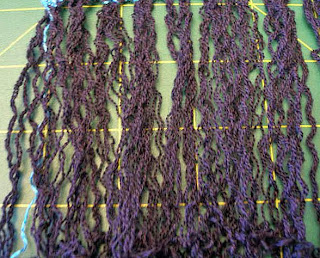 This is what it looked like when I undid the braid, arrrragggghhhh! 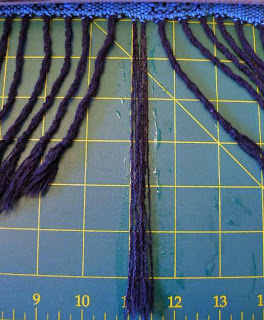 I wet down one fringe bout to make sure that I had enough for a nice looking fringe and I still had 6 inches to work with. 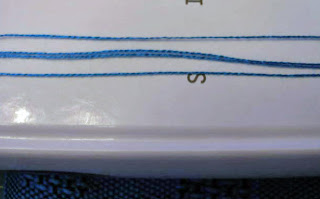 My idea was to add 8 Tencel threads to each fringe bout to fill them out and to stabelize the curl still left in the bout. I cut groups of threads twice as long as I needed and had them ready to add to each bout. 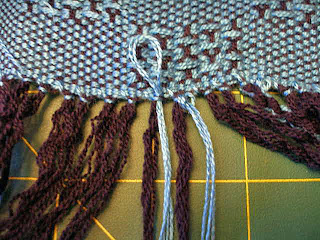 I first attached them to the fringe through the hem stitching and with a snitch knot. I then twisted the additional threads with the wool that was in each bout. 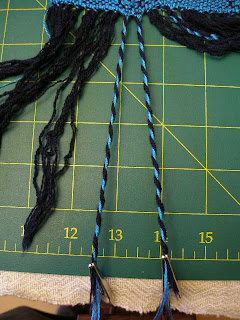 Then twisted the two bouts together. It’s a bit candy cane but still looks good and has kept a decent length. 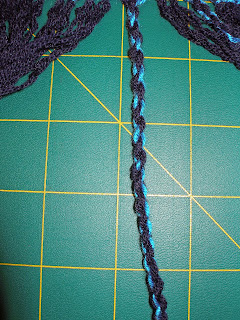 My new problem was that if I finished with an overhand knot, I’d lose precious length and I needed every inch, so I decided to wrap the ends. 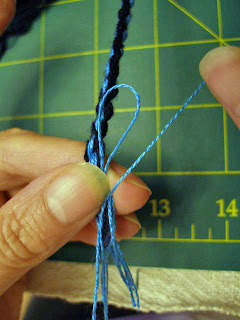 You start this process by taking about 5 inches of yarn and making a loop which you hold against the fringe with your left hand in the spot you would normally place your overhand knot. 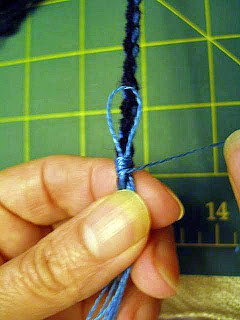 Using your dominant hand wrap the long end of the yarn around the bout; in this case I did it 6 times. 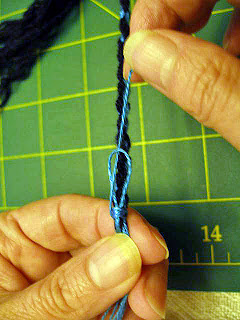 When you have wrapped enough times you then take the wrapping end and pull it thought the loop. 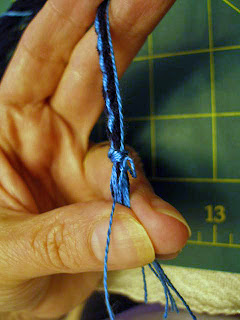 You then take the other end of the yarn that was laying against the bout and pull gently; the top loop will be pulled under the wrapping and out the bottom of the wrap. 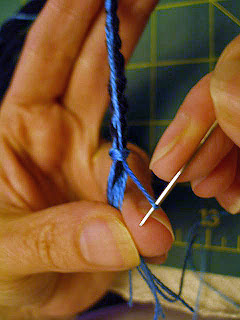 You can use a darning needle to help increase the size of the hole so you can get the yarn tight. 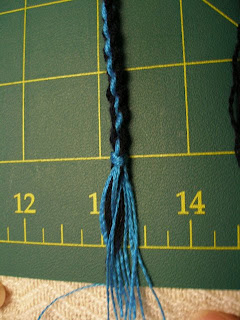 You may have to needle weave the other end back through the wrap to finish it off, it depends on how many wraps you do and how tightly you do it. The end result looks good to me, and gave me 6 inches of soft bouncy fringe that compliments the scarf. Now on to the beading - but that's another story!
Posted by Lynnette at 2:46 PM

I really like the colour gradations of the tencel... and your network circles!

Thanks for the wrapping how to! Gloria used to do that all the time on her twisted fringe and I wanted to try it too. She did it so fast though, I couldn't keep up!

Great save on the nasty fringe...its all a fun learning curve isn't it?

The colours you chose work so well with this structure, the scarf is fabulous.

Thankyou for the fringing tutorial as well: Im going to save that, I suspect it'll come in handy one day.

The scarf is a delightful wonder-circles from straight lines....just so pleasing on every level. The fringe is labor intensive but it going to yield excellent results so it is worth it. Thanks for the how-to lesson to wrap the ends.

Wow how did you do that?! It looks fabulous, love it!

The scarf is simply beautiful, what an exciting weave structure! How does the binding pattern look?
You had really bad luck with this fringe, but managed to find a very clever solution, congratulations!

A beautiful scarf but how does the binbing pattern look? I liked the pattern very much. You have so nice colors together, I love blue.

I love the scarf and the colour gradation. Strange because I just finished weaving circles network drafting

Can't add anything to what everyone else has said, except that I love the scarf too!

I see the pattern as net or honeycomb, not spots, does that say something about how different people perceive the same thing?

I've looked at your post several times, but wanted to come back when I had time to really read it and understand it!

First, your scarves are fantastic! I love that you can make circles. I've been trying to figure out how to do that - ever since my brain got tangled in a knot trying to convert a warp rep draft that had circles into something slightly different. I'm relieved to see circles in some other structure!

I was enjoying a friend's tencel scarves over the weekend. I really need to try some tencel myself. It makes beautiful scarves!

Thanks for the tutorial on fixing up fringe - especially the details about wrapping the end. I never quite trust fringe, so I'm sure that some day your tutorial will come in handy!