I went to my first weaving workshop, it was on transparency. Transparencies are supplementary weft inlay on a sheer background, usually plain weave. The inlay techniques are used to create shapes and textures. I went mainly because I’d never been to a workshop before not because of what was offered. I didn’t have much interest in wall hangings . . . then!

In the mail I received the warp, which was beautifully tied up with different coloured ties to aid with the warping, I should have taken a photo! The warp was 12/1 linen. I have never used linen was warp so I was surprised by the liveliness of the linen. We also used the same linen as the tabby weft.

The first inlay technique is called Greek inlay (can also be called French inlay). It produces an intense block of colour. And on the left side you can see where I pulled the inlay weft too tight and it pulled the warp thread out of place. The first photo is on the loom and woven with the wrong side up. 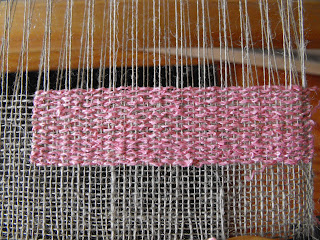 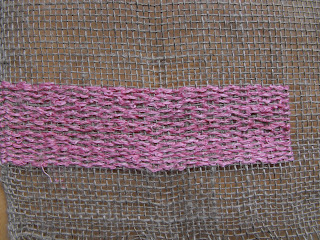 The second technique is called Twill inlay. The inlay weft is laid down in a 3/1 twill. It produces a lighter coverage of colour but the texture and movement of the twill adds interest.
The first photo is on the loom and woven with the wrong side up. 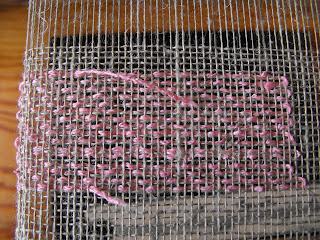 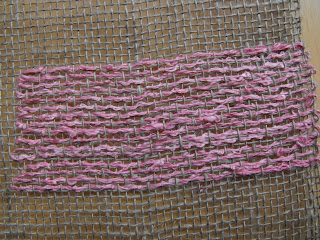 The third technique is Greek inlay 2. It has double rows of tabby weft (the linen) which makes for a more diffuse colour.
The first photo is on the loom and woven with the wrong side up. 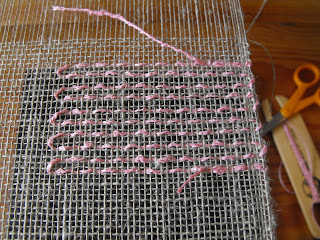 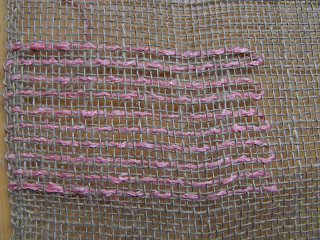 Here is a picture of the first three techniques and you can see that the coverage and colour is getting diluted. 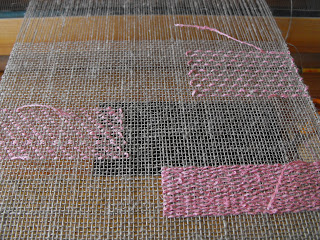 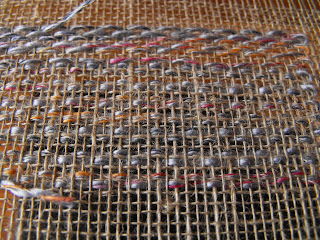 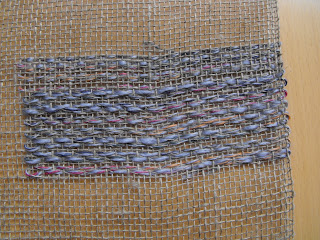 The next is Dukagang, which has two samples. The only difference is the number of tabby wefts between the inlay. It has a stacked block appearance, good for images. 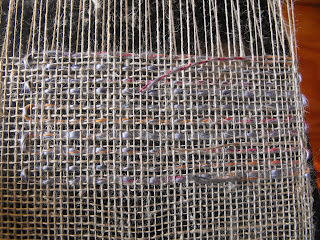 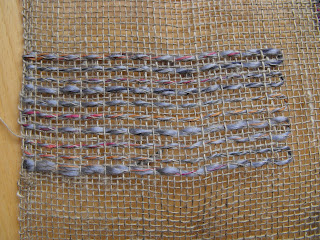 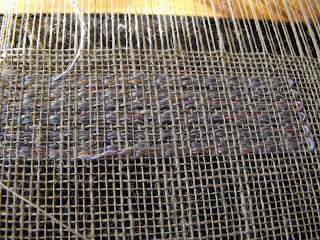 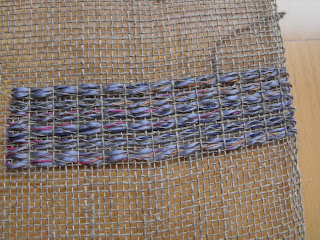 My favourite style of the day was the Finnish techniques, there are four of them and I really liked all of them. The first makes little blocks of colour. 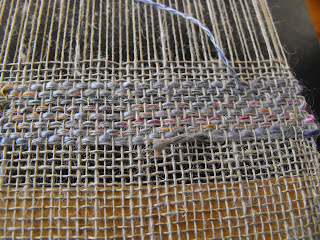 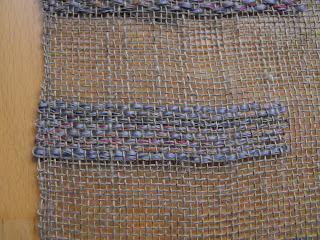 The second makes stacks of colour. 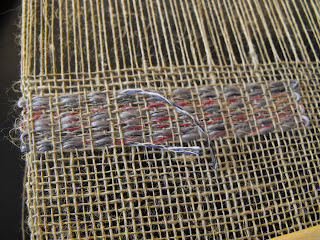 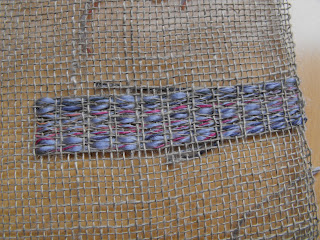 The third has a diagonal movement to it. 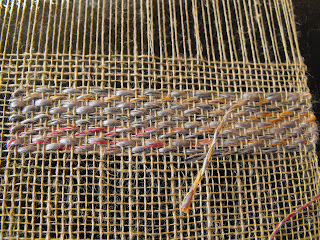 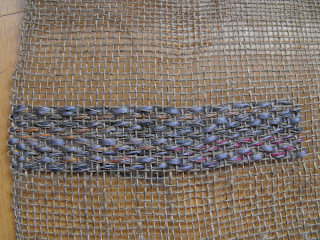 The fourth makes stacks of colour with a longer float then the second. 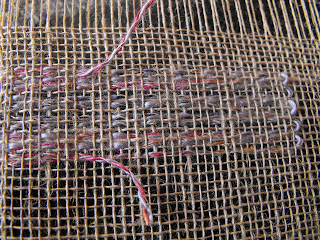 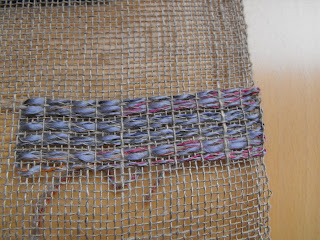 I was the only person to finish a cartoon that day. I did a butterfly in blue chenille. I used the third Finnish technique for the wings and Greek inlay for the body. Only up close can you see the difference. The white thread on the right hand side is the thread that I used to stitch the cartoon to the warp, it makes using the cartoon really easy to use. 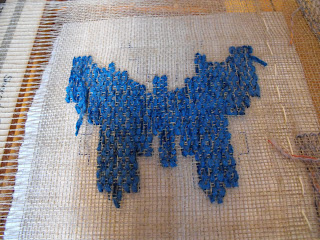 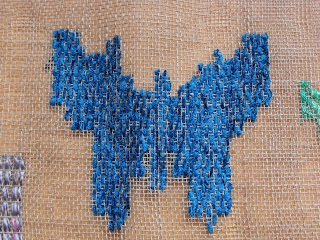 When I got home I still had some warp left so I did some more cartoons, another two butterflies and two birds. Below the butterfly’s wings were done with Twill inlay and the body was Finnish inlay 1. The inlay weft is silk, both the green and orange. 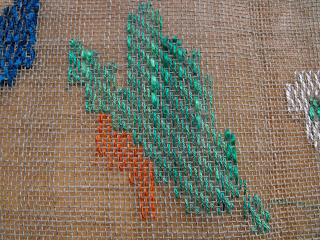 The second butterfly was entirely done in the Ryss method. Again the inlay weft is silk. 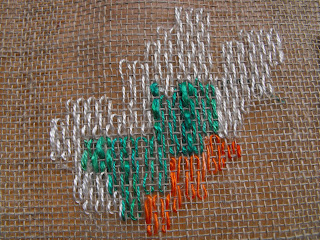 The kiwi was done in Greek inlay and the inlay weft is chenille. 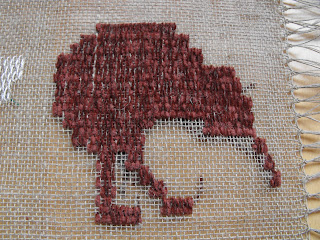 The shallow was done in Finnish inlay 1. The inlay weft is blue chenille and the beak is orange silk. 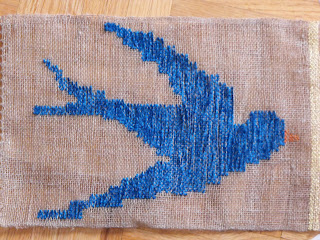 I was really excited at the end of the day and I really like transparencies. I have visions of transparencies in my future!
Posted by Ngaire at 8:08 PM

thank for sharing all this pictures! This is very informative!

I never even heard of transparencies in weaving, and yours are really beautiful.

Am I correct in assuming that all the inlays were needle woven after the linen cloth was woven?

I love this! A friend of mine has some old, old transparencies that her mom made, and they make me want to learn. I love that bluebird. Thanks for being so detailed in your descriptions -- this will help me when I get around to trying one.

Great blog post and wonderful photos! I'm looking forward to seeing the transparencies you do next. Who taught the workshop?

The inlays were woven at the same time as the background linen. There was two shuttles, one the linen and the other the coloured weft.

Thanks for the clear instructions and details on yarn and sett. I am enthused by your adventures!