I'm really look forward to a New Year and all the optimism that goes with it. All the opportunites to start fresh armed with all my weaving resolutions I can't go wrong...right?

I’m still on a stash busting frenzy….so while I was weaving my yardage I was also knitting a pocket scarf for Ngaire. This is to go with a sweet little black boiled wool jacket that due to the peplum doesn’t have pockets. I didn’t use a pattern for the construction of this scarf because I was using my own handspun merino and figuring out gauges can be difficult with the variations in handspun. 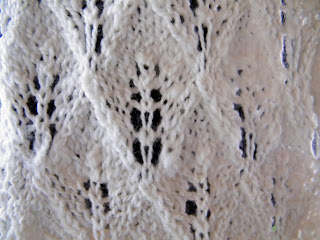 I decided to knit both sides of this scarf at the same time to ensure that both sides would be the same length….nothing worse than running out with one side only half the length of the other! Nahhhh, I've never done that! 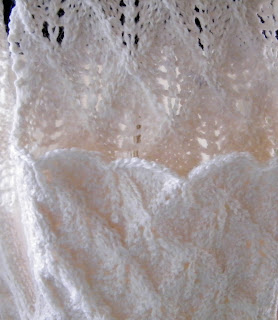 When it looked like I had just about used up my yarn, I switched to a 3x3 rib for about 6 inches on each side. This was to make the scarf thin enough to sit nicely under a collar. Now came the hard part …I tried to do ‘Kitchener stitch’ and sat down and followed an excellent Youtube tutorial only to find that I’d knitted one side right side up and the other upside down….I was following a tutorial for doing the toe of socks….duh, no wonder it didn’t work! 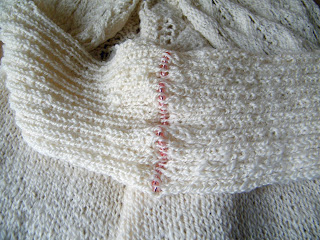 I scrapped that idea and used my own finishing technique. I decided to graft the stitches together with a nice pink seed bead….cute eh? And just perfect to keep the scarf weighted at the nape of Ngaire's neck.

Now onto something weaving related. I usually weave with an end feed shuttle and pirns, so when I was winding these bobbins I followed the same procedure as when I wind a pirn. 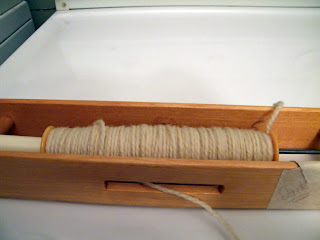 When I wind my pirns I start off with the first bit of the yarn tucked into the hole in the pirn and then wind away….when I put the pirn on the end feed shuttle I just keep the wee bit tucked inside and away I go. 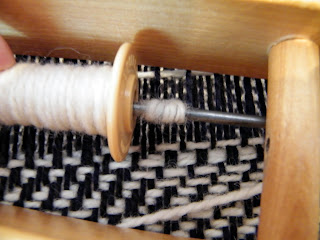 This did not work with my bobbins….I was weaving away happily and then I came to a grinding halt….seriously, stopped dead in my tracks!

Seems that the wee bit of yarn didn’t stay tucked in as it does with a pirn, it wound itself tightly around the bobbin shaft on the shuttle and refused to budge. 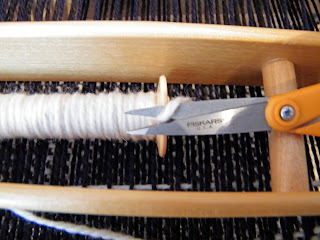 Lesson learned….clip that wee bit of sticking out yarn off before beginning to weave 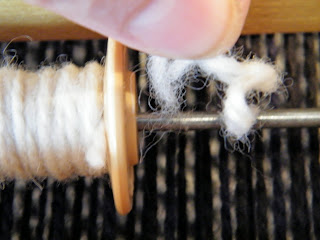 I find it quite amazing that this tiny bit of yarn could cause me so much grief!
Posted by Lynnette at 3:30 PM

That knitted scarf is so beautiful. I love it and with a black jacket it must look stunning.

Oh, I love that pocket scarf!

I've had that same issue with bobbins and the stray end. I overlay it now when I begin winding. I remember that "abrupt stop" all too well!

I've had the same issues with the yarn on my bobbins. What a mess.

I never fails to amaze me of all the little tricks we create to keep the wheels and bobbins rolling.
I wrap the yarn around the centre of the bobbin (or end of the pirn) and twist together tightly. Then commence winding. When weaving it just comes off with no sharp jerk to spoil your last few rows. No one showed me, and I didn't figure that out due to problems... I just did it and it seems to be a happy method.

Can't wait to see what you have lined up next!

The scarf is lovely and will look great with a black jacket. I could not have done it without a pattern so am very envious !
My bobbin winder (aka Tony !) has learnt to be careful to tuck the end in well but on the pirns he still tends to try and put too much on and then I get a problem at the thin end when it comes off too soon !!