This scarf is totally different from anything I have done, which is kinda normal for me! It is black and white stripes which were going to be 8 threads each until I remembered that I was using 2/30 Tencel which would have made for really teeny tiny stripes. Oh, the stripes are going to become pleats! So the stripes became 1 inch wide. 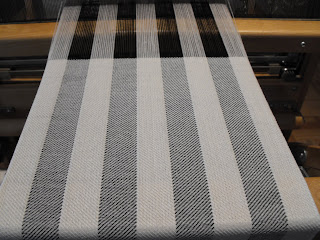 To make the pleats the white stripe is a 3/1 twill and the black is a 1/3 twill. The strong diagonal line from the twill makes it pleat. 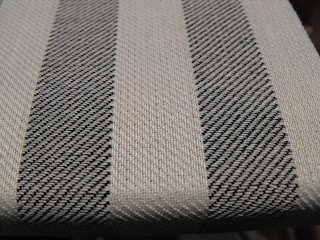 There is a definitely two sides to this scarf, one side has white and black stripes, the other is white and charcoal grey. 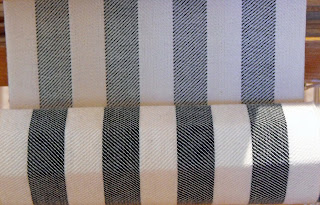 Here is a photo of the scarf on the loom with the tension off; the pleats are starting to show in the gentle curves. 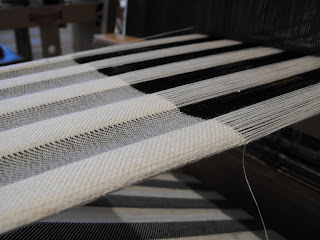 On the loom the scarf is 9” wide but after it came off it pleated down to about 2”. It was rather amazing to watch this scarf curl up and make these amazing pleats. 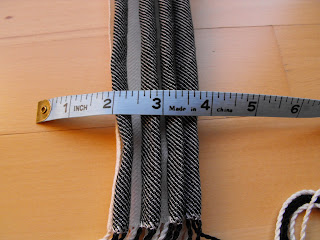 After washing in warm soapy water and hanging to dry, I pulled gently on each stripe to set the pleats, no steaming was needed. The scarf is amazingly soft and has an unusual drape, which is still comfortable and pretty. The scarf now has two different sides, no more strong visual stripes, one side is white, the other black. 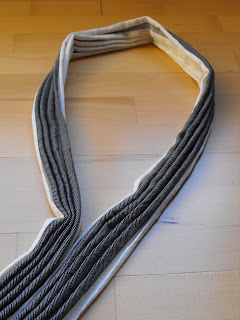 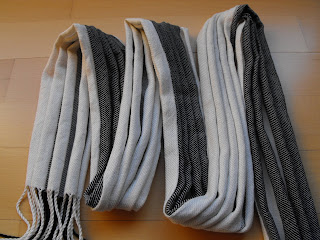 This scarf is remarkable and I would totally do it again although I think that I would make the stripes only ½” wide because it would make more and shallower pleats!
Posted by Ngaire at 10:07 AM

Very nice! Thanks for sharing.

Wow, I've never seen that before! It looks super smart, very contemporary too. What a great idea!

That is so cool, I love the pleats.

Now that is very cool!

This looks just great, and is definitively on my to-do list! Thank you for sharing!

I'll add mine to the list of "Wow"s. I love it when the structure of the weave makes an obvious third dimension. It's one of the aspects of textiles which most fascinates me. Something like this is now on my "to do" list

Amazing!! Something to try later!! I think that the end product is so interestin...thank you

I have seen pictures of scarves like that in handwoven but never seen it happening for real. It looks truly amazing and my daughter would say it was 'trendy'.
The narrower pleats sound good so looking forward to seeing number two !

HI! Wow what a wonderful textile piece! I was very surprised when I opened your blog and found your latest post with your lovely, detailed description of your scarf's weaving process. This is because I'm just in the process of finding the right tie-up to my mohair yarn and your post was rather instructive and the result was lovely. I've tried something that resembled what you did but I've not yet succeeded.
Though it was rather funny to find the same design (twill) with different conditions. It was nice to see and I like structures but I've understood that it's definitely not the same with Tencel as with kidmohair from goats!
The mohair in my mohair project is spun in Denmark but comes from goats in a small farm in the south of Sweden where you also can buy it, here's the link: http://www.skaningsmala.se/

By the way, where do you buy your Tencel? Is it a common weaving yarn in Canada?
Have a nice day/Meta

I love it, I love it.
Yesterday the postman brought me the book 'collapse weave' from Anne Field, I ordered. So I eat drink and sleep collapse weave. And now you have woven this wonderful gorgious scarf. I do like the wider pleats. I must remember it. Did you use an en feed shuttle? (it is recommended by Anne Field)

Hi Meta,
Thanks so much for your comment. We buy our Tencel from Yarns Plus in Ontario www.yarnsplus.com and I know they ship to Europe as Dorothy in Scotland has a shipment on it's way to her.
Hi Marion,
I did use an end feed shuttle - a 12" Schacht to be presise and I use it for everything - fantastic edges!
Ngaire

I just found your great blog, you are weaving really wonderfull things.

have a fine weekend Patricia

I really must try this! I love these. I've got Anne Field's book on collapse weaves, but felt a bit overwhelmed by it. Now I'll take it from the shelf again. Very inspiring!

Hi there
Thank you for visiting my blog. I have an ambition to produce some pleated scarves like yours when I get my 8 shaft up and running.
I am looking forward to a course with Sara Lamb in 2 weeks time with the Cambridgeshire Guild, UK
All the best
Maggie