For the first time both Mum and I are weaving the same weave structure – twill. I am weaving undulating twill for upholstery. Undulations because I wanted to have a sense of movement and to have a rounded shape to compliment the footstools that it will be covering (they are oval). It was also important to choose a pattern that had small weft floats as it had to be a tight fabric so there would be no catching and pulling on the threads. 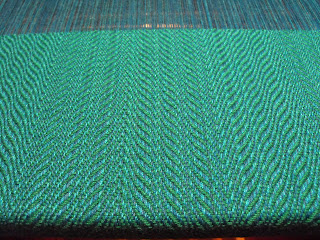 I am using Orlec because of the fantastic colours and the hard wearing properties. I am using three shades of teal in the warp, a light teal and two dark teal – they are actually the same colour but are different dye lots so they look like two different hues. I was going to do stripes of colour but soon realized that the undulations are partly an optical illusion so the colours needed to be random. When I pulled the warp, using 3 tubes at a time, I didn’t try to keep them in any type of order. So when I was threading I used whatever thread came first, I really wanted the warp to be organically random, no ‘fixing’ the randomness! 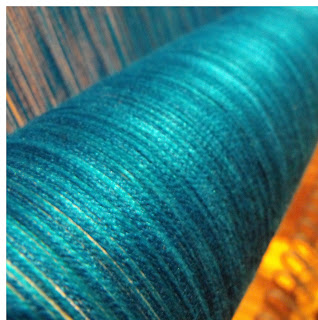 The weft is an emerald green and is treadled in point twill. It really made the blues pop. The pattern reminds me of the surface of the ocean or maybe being inside of a kelp bed. It is really interesting; I spent a lot of time modifying the original pattern. I turned the draft and rotated the repeat, then mirrored the repeat, I think, maybe I inverted it too I can’t really remember as I was deep in the designing mode! 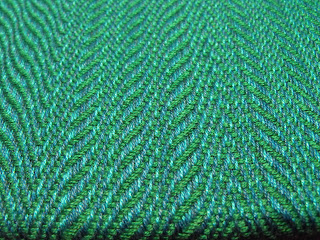 I am doing enough yardage to do two footstools. For the second half I was going to treadle the pattern as drawn in, which made really pretty blocks . . . on the computer. With the emerald green weft the pattern faded into the background and just went blah. 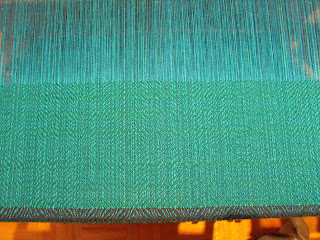 I tried the pattern with other wefts but nothing worked so I have woven the same point twill as before. But I have kept the pattern and I know that I will be revisiting it because it is stunning. Here are a couple more photos which may show the pattern a bit better. 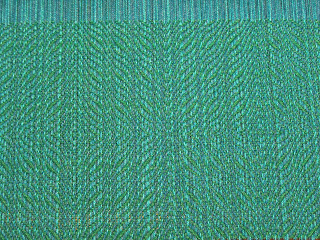 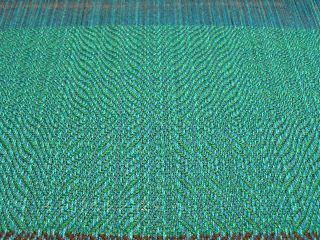 I have pulled the yardage off the loom and just need to wash and press it before I can cover the footstools. I am really looking forward to seeing the finished project!
Posted by Ngaire at 1:09 PM

What a lovely upholstery fabric! I love the way you warped, and the different hues in the warp. Too bad that the blocks didn't show up well, but I think some things will always be a bit unpredicable. By the way, I should have sent a draft to your mother, I promise to do that soon.

I love the variations in the warp! The randomness (is that a word?) looks so natural. The twill is lovely and I'm sure that when the light plays on the curves in the pattern, and then the curves on the foot stool, it will show to perfection!

I love working with undulating twill. Your's is beautiful.

I love your undulating twill and the colors. Hope your stools turn out well.

The colours are my favourites especially the warp colours. The pattern is stunning and will set off the stools very nicely. Will you let anyone sit on them !!!

This is so beautiful! I love the colors and the pattern is so cool. Lately I'm getting real interested in upholstery. Your blog is a great place for budding weavers to learn :)
LDJ