Lily’s little sister Lavender Jane (pretty big handle for such a wee loom) arrived today, just in time for Christmas as my husband had hoped, it was his gift to me and I’m over the moon! He had ordered the loom while we were on our Island Adventure with Susan and Bruce in August. It was exciting to see the UPS van pull up at our freshly shovelled walkway, since we have mountains of new snow, timing was everything. 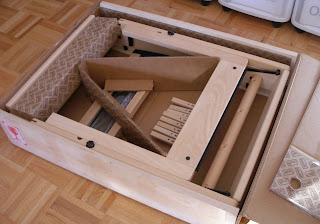 As usual Louet really does a wonderful job of packing their products; no travelling bumps on wee Jane as far as I can see. 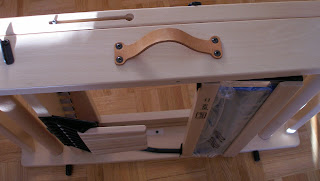 There are several amazing things about this 8 shaft table loom and one of them is that the weight is only about 17 pounds and she folds down to only 5-1/2” in height. It has this nifty carrying handle to make moving it around a breeze, and Louets’ signature mounted raddle. 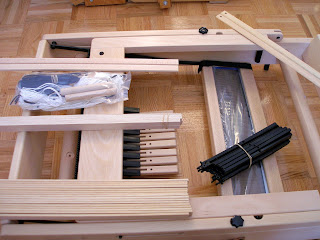 When everything was out of the box, it was time to assemble – unfortunately it only came with 200 heddles which aren’t enough for an 8 shaft loom, and the warp rods had been forgotten in Toronto and one of my shaft holders had split. Jane Stafford who helped Louet develop this lovely wee girl, emailed me even before I had received the loom to let me know about the heddles, so that wasn't such a surprise, Jane would order more heddles for those of us who purchased the very first shipment of looms and sell them at a reasonable price; she also ensured me that the rods and my replacement part would be sent right away. Since I'm not in a real rush to get going I'm happy to wait. 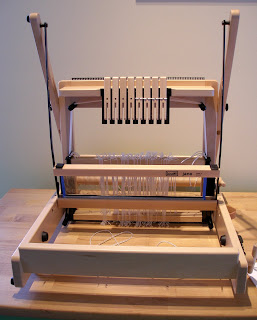 So Michael – who was like any boy with a mechano set, mounted shafts 5-6-7-8 on the loom and got Lavender Louet ready to go. The overhead beater is a real treat and the fact that the beater can be secured out of the way when not in use is a nice touch. I even love the Velcro that hold the reed in place - a very neat idea. I can’t wait to discover more about this loom. 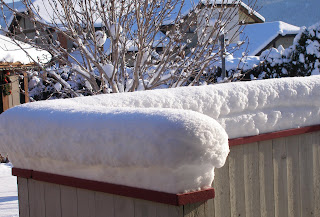 Thought I’d show you another photo of my snow load on the balcony rail, now it looks like a loaf of bread. We have had extremely cold nights, plummeting to -35C so most of the water has been evaporated from the early snow leaving the new snow to pile onto a diminishing base.
Posted by Lynnette at 3:59 PM

Hey Lavender Jane looks great! Nice addition to the family. I can just imagine them all together in that great weaving space you have there. So light and airy.

I never checked the black end of the shaft pieces that came with mine so I'm off to check them over.

I hope to set up a card insert warp on mine... I've written to our friend (near you) asking her to share her draft.

Louet really makes a beautifully crafted looms don't they? Right down to the packaging!

Hi Lynnette, love your blog! Your weaving and your looms are fascinating...and I'd really like to hear more about the cooking class in Italy. Are there any recipes from that experience hiding in your kitchen? I'm a little shaken by my attempt at barbequed pork hocks. They caught fire while I was inside warming my fingers and toes, so I presented them on a platter as "cajun pork - blackened." They weren't a big hit for some reason. If the snow gets any deeper, I'll try to flog them to the racoons that come to the back yard every night.