This post is about the second scarf that I made from the grey and white striped warp. It is also a pleated scarf. 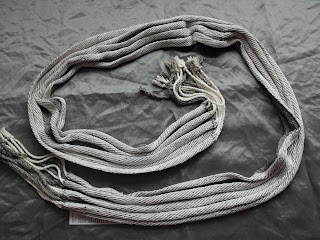 When I was pulling the warp I noticed that the grey silk was a little sticky because of the texture of the yarn from the flecks of black and white. It was enough of a problem that I decided to keep the lease sticks in, I have never woven with the lease sticks in so I wasn’t sure how it would affect the shed. I was pleasantly surprised by the fact that I didn’t really notice a difference. I think because I use a countermarche loom that the double movement of the shafts really limited any affect that the lease sticks could have produced. 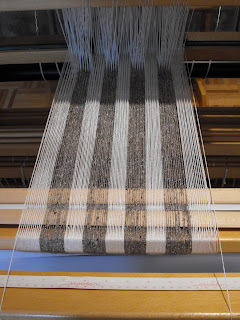 During the weaving of the first scarf, having the lease sticks in didn’t seem to be really needed and I was thinking about taking them off. I am really glad that I didn’t because by the time I was half through the second scarf I really needed those lease sticks. The far right stripe was the problem stripe, it was really sticky. But a quick thrumming and the warp was good to go. 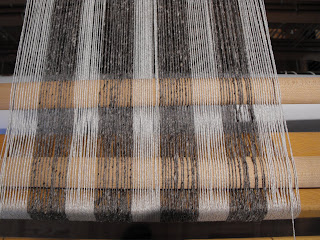 For the second scarf, I used the grey silk as the weft. It was difficult to use because the yarn kept twisting on itself. I had to be really careful and watch each pick to make sure that the weft was straight. 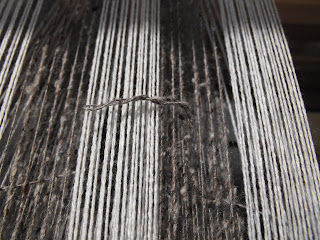 The grey weft really darkens the scarf. The weave structure in the grey stripes disappears but with the white stripes the twill is clearly showing. I don’t know why the end-feed shuttle is in the picture but it is the best photo I have showing the top of the scarf! 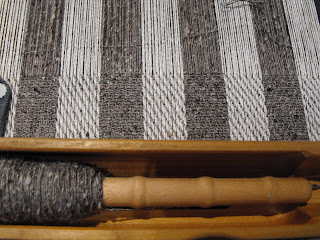 The bottom of the scarf is really dark. The texture of the grey silk is really showing up with the scarf and it makes for a really interesting scarf. 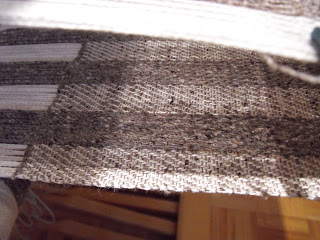 I wove up to the very last inch of the warp that I could. I was a little short because when I measured for loom waste with this loom I measured from the back of the reed in the resting position to the back of the heddles but that isn’t right. The shuttle can’t weave all the way to the reed, there is just no way so I have to add those couple of inches to my loom waste calculation. Because in the below photo you can see that I was really trying to get the couple of inches that I needed so the warping bar was pushing into the heddles! 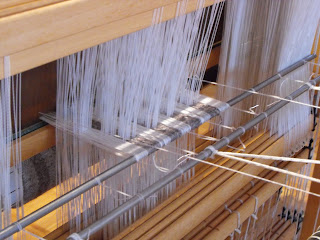 This scarf is heavier then the scarf with the rayon weft. It also had a lot more texture; it is really reminiscent of a pebbled stream bed. 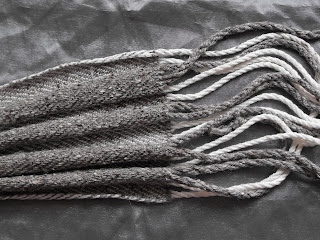 The two sides of this scarf are very different and that makes for a striking look. 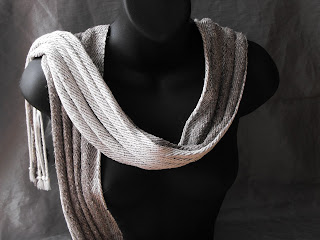 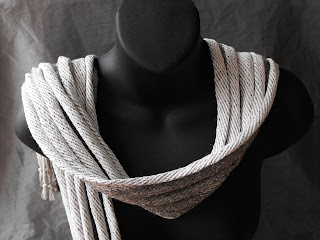 I like making this style of scarf, it is easy weaving and yet so effective. They look really unusual and eye catching when displayed. These scarves in grey and white are monochromatic yet have a depth and texture to them that makes them an interesting addition to any wardrobe.
Posted by Ngaire at 12:42 PM

This IS really gorgeous! You've made me want to try it.

What's your take on the importance of the types of yarns used? Should they be the same fiber? Weight? EPI?

The first time I did this structure I used the same fibre, cotton blend, but this time I used two different fibres, rayon and silk. But the fibres were similar grist, the cotton scarf at 2/20 and the rayon and silk at 2/10 I just changed the sett.
As I am thinking about it the rayon was 2 ply and the silk was a slubby singles, but they looked to be the same dimension.

So I would say that anything goes as long as it is similar grist but even then it could be interesting to see what would happen with two different grists.