Last year a lovely member of the GCW Scarf Exchange popped a couple of hand woven book marks into the parcels she sent with her exchange scarf. A few months later I noticed that my husband was marking the page in his library book with a bit of ‘poopy paper’ and decided that I’d better address that situation post haste!

I guess it will come as no surprise to those who know me; but warping up any of my looms for such a small project didn’t get me very excited. Sooooo, instead of a single book mark warp I decided to put on five…. instead of finishing with four book marks, I made twenty for essentially the same weaving time! Yup I'm an overachiever! 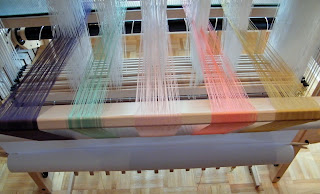 I was sure that I could put the five individual warps, with five individual threadings on my loom and weave them at the same time as long as the grist of the warp threads was the same or at least very close. That would ensure that I would keep the fell line level as I wove. Once I had decided on 2/20 as my warp grist it was a quick task to make all five 2 inch wide warps. The warps were only 2 yards long and had an average 96 ends. I decided to weave the book marks as a 12 shaft Twill Gamp. 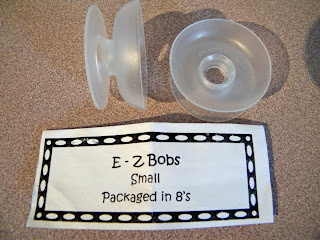 Figuring out what shuttle to use on these tiny warps was my most challenging problem. Then I remembered the E-Z Bobs that I bought to use with my Kumihimo plates and Lucet. 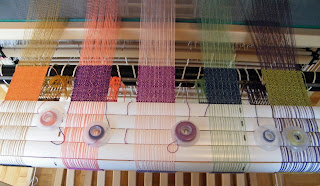 These worked fantastically; they held enough weft to complete a single book mark, held the weft in place with the snap feature and they were light enough so that if they fell off the loom they didn’t yank the weft out! Perfect in every way… 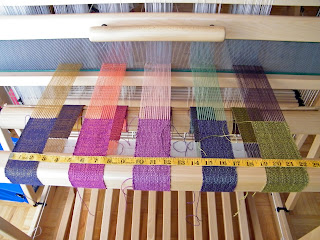 I found that the five book mark warps with two inches between them worked out to be exactly 22 inches in the reed, so that was a great workable width for me, I'm pretty small and I wanted this project to be fun, not a arm stretching workout! 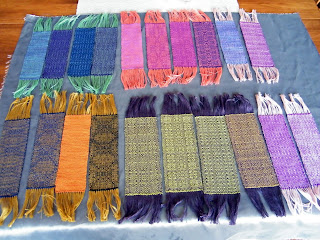 Tadaaaa, here they are in all their glory! These book marks worked up so fast and they were so much fun to weave, hemstitching each one is what took the longest! Some of my first weft choices didn't show the patterns as well as I'd have liked; I had hoped to use all singles silk, but the slight slubs in my silk blurred the pattern, so I changed to 2/8 tencel in strongly contrasting colours and found this much more successful. I planned enough warp for four 8 inch book marks with 2-1/2 inch fringes, plus loom waste. I treadled two book marks Advancing, one Rosepath and one M’s & W’s. Here’s a selection of my favourites from each warp. 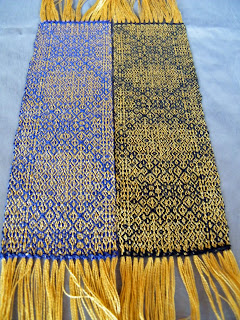 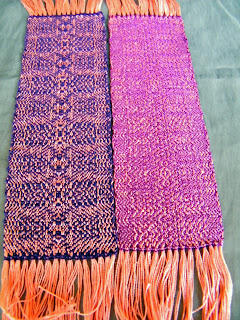 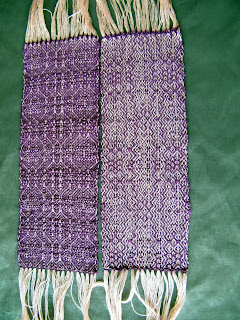 The pink 2/20 linen was threaded Rosepath. 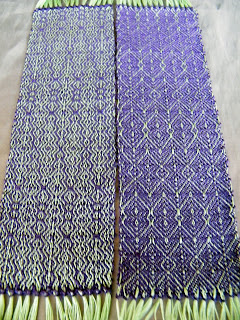 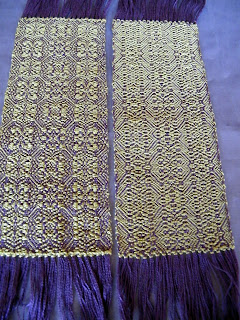 The 2/16 mercerized purple cotton was threaded M’s & W’s and this one was the widest of all the book marks by 1/2 inch.

This project was fast and fun, fun, fun! I plan on doing another set for the GCW 2011 Exchange.
Posted by Lynnette at 2:00 PM

How fun - what a grand idea!

Beautiful, and so informative too! Thanks so much for sharing your ideas.

Those *are* glorious! I've often wondered how one would go about weaving multiple warps (or one warp divvied up) at the same time--didn't even know if people did it. I'll bookmark this post for for future reference. What I'd really love to do is weave divided tab-tops into curtain fabric.

What a great way to produce bookmarks and they look lovely. They will make lovely gifts !

Fantastic idea, congratulations! I have managed mostly two warps at the time and have given up.

BRILLIANT!!! I like having small projects like bookmarks for sale, but hate warping for them. Doing a few at a time with tiny shuttles sure makes sense. And your designs are all lovely.

Beautiful! And what a dynamic idea! Thanks for sharing. I have to try this.

What a great idea. They are all beautiful. Thanks for sharing.

Your bookmarks are gorgeous!