When I design a project I usually pick a weave structure that I want to do but this time I started with colours that I wanted to use. They are gold and taupe, which really lend themselves to being warp. I tried a Fibonacci sequence but it really muddied the weave structure so I ended up with a 1 and 1 sequence of the gold and taupe. The colour of the warp is just amazing! As I took the picture of the warp I realized that the colours are the colours in the wood of my loom! 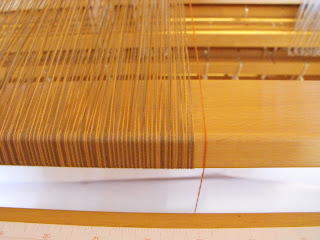 I am totally obsessed with using all of the 12 shafts on my loom; if they are there they must be used! So when I saw an eight shaft Drall that I liked, I developed my own 12 shaft Drall and I knew that I had to weave it. 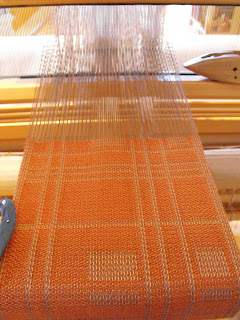 The weft is orange, a lovely pumpkin colour. It warms up the warp and brings out the depth of colours. I like the fact that the Drall makes a reversible scarf; it is like having two really different scarves from which to choose. I am not sure what side I like the best, I can’t really decide until the scarf is off the loom. 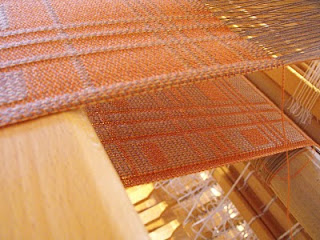 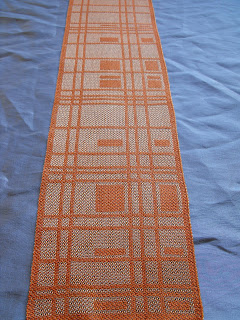 The fringe was finished by doing a quadruple fringe twist. Each twist has the same number of the gold and taupe but the way that they combined in the twisting made for each strand to look different. The four strands make a lovely round cord which makes for juxtaposition between the squares and lines of the scarf. 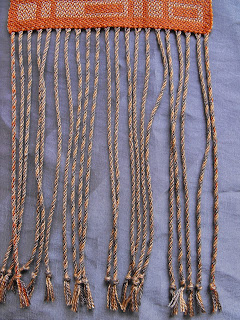 Below is the picture of the orange side of the scarf 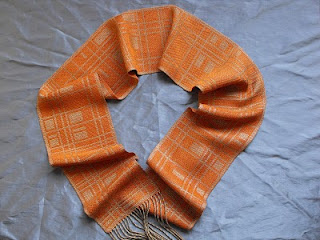 Below is the picture of the golden side of the scarf 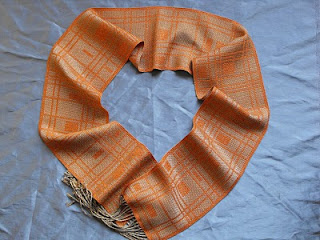 I think that I like the golden side of the scarf best; I love the floating orange squares and the striking lines. This scarf defines classic elegance!
Posted by Ngaire at 12:10 PM

This is truly gorgeous! I don't have access to a 12 shaft loom...but you said you found an 8 shaft drall that you liked. Can you share the source?

Wow, now there's a beauty!
Love the colour combo. Alternating end for end in the warp seems to give the cloth so much more depth.

To each her own -- my preference is the orange side. However, when I draped it around my neck, I'd probably make sure both sides showed

I'm just beginning with block theory, and I'm really excited about it. Your scarf gives me a great visual.

That's really beautiful! I'm a beginner weaver but I hope some day to be able to do beautiful things like that.

Hi there - I love the Drall pattern but haven't seen it in 12 shafts before. Like you, now that I have 12 shafts I feel I have to be using them ! The colours in the scarf are beautiful.

Drall is also known as Twill blocks and a good 8 shaft sample can be found on page 55 of A Weaver's Book of 8-Shaft Patterns by Carol Strickler.