Attaching a Raddle to the Castle and Mommy Mummified

What is the first thing that should be done with yardage? Well if it is a +30 C day, you wrap your Mum in it to see how much yardage you have woven! I will always remember my first yardage now!

Last time I warped the Minerva I used a large dent raddle from a larger loom which worked but it could have been better. Therefore this time we tried something a little brave. Mum had an extra 5 dent reed so it was cut in half to be used as a raddle. First we placed it on the back of the castle, but the threads got caught between the wood and the raddle which just made a mess. Then the raddle was placed behind the castle (like in the photo) and it worked like a hot damn! 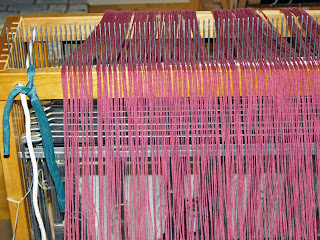 The yardage is intended for napkins and is a 1,3 twill on 8 shafts and reminds me of grapes. The warp is a 2/8 cotton in plum and the weft is 2/8 cotton in dusty rose. I ran out of weft so the last quarter is 2/8 Orlec in a similar dusty rose except it has a fantastic shine that the cotton doesn’t. I used a temple as the fabric pulled in; but since I like to use a temple it was not an inconvenience and made the selvedges great. 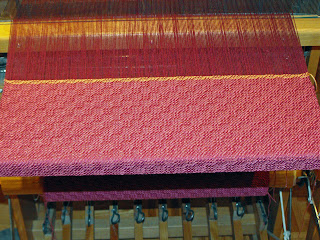 It was an easily remembered treadling and so I was able to sit down for hours with my iPod on and just weave (and sing along). It was great fun, it had a fabulous rhythm and each pattern repeat was an inch so the 6 yards seemed to go fast. 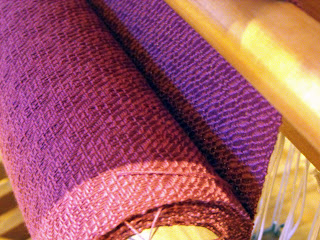 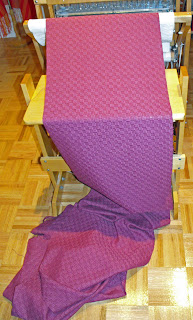 Beautiful! And it looks like it has a nice drape to it.

I love the color and the structure, beautiful!

Great choice for napkins. I ditto everything Melissa and Charlotte have said.

Oooohhh, beautiful!! Watcha gonna do with it? That looks like it would make a nice ,soft, drapey jacket.Love the colors too,supple but not boring.

What can I say that hasn't been said? I agree with everyone. Love the way you displayed and took your pictures.

You have a fun blog! This is the first time I have visited. I too am a weaver, living in the Oregon Outback.