My favorite winter scarf is one that my Mom wove in Collapse Weave way back in 2015.  The scarf is a beautiful soft rose Merino wool with a lovely crepe de chine texture and a wonderful drape.  So I decided to weave this exciting weaving technique!

The warp I'm using consists of 2/16 Merino wool in tan, a rayon knop in Peanut beige and Lumeya Luster in gold.  The Lumeya Luster is from Reiko Company in Japan.  It is a neutral colourway but the sparkle of the gold Lumeya makes this warp really pop.  It just glitters and shines even in the weak winter sunlight.  This technique is all about differential shrinkage so I don’t really know what will happen with the Lumeya shrinkage wise, I also don’t know if it’ll be strong enough to be warp!  But it sure is pretty. 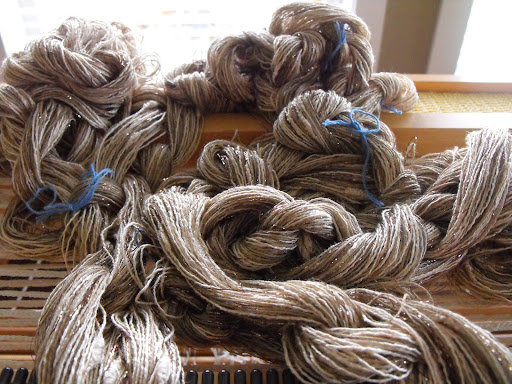 I made enough warp for two scarves and beaming the warp went surprisingly well . . . for the first couple of yards. 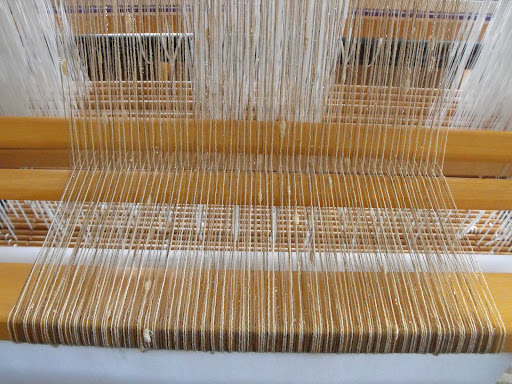 But then the Lumeya stretched slightly making it a little longer than the rest of the warp which created loops that looped around the top raddle on the Spring loom.  I only broke three of the Lumeya threads but it was a bit nerve wracking pulling on the warp. 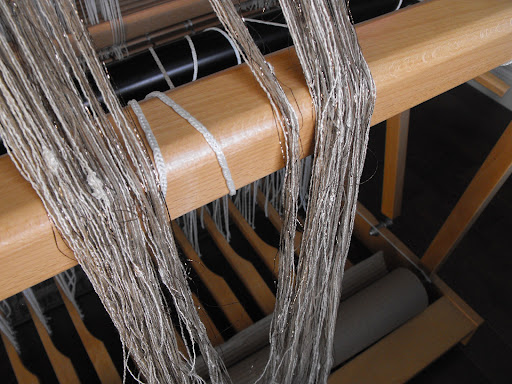 The weave structure is plain weave and for the threading I placed the Lumeya and the Merino wool into the same heddle, yup there is a lot of shiny in this warp! 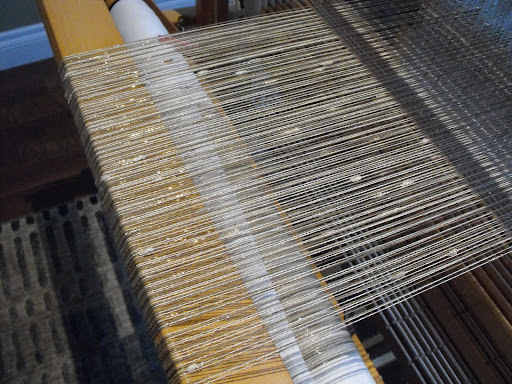 The weaving of these scarves is a little different; I’m using a very fine high twist wool as the weft, it comes in at about 2/110, finer than sewing thread!  The beat for these scarves is very loose, about 10-12 picks per inch.  In the blog post from 2015 Mom said that it is best to squeeze the weft on a closed shed, boy am I glad to have that information. 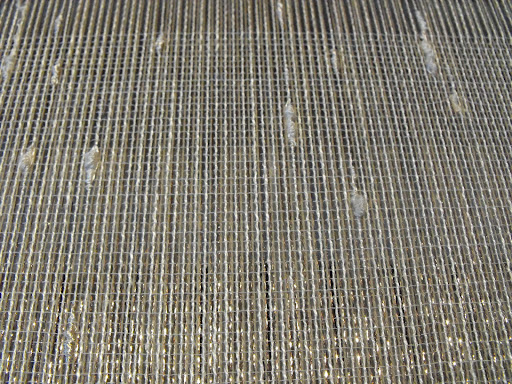 For such an open and airy beat the scarf didn’t weave up particularly quickly.  The rayon knots added some interest to the scarf; you just ignore the displacement of the weft going around the knots.  It was a pleasure to see the shine while weaving. 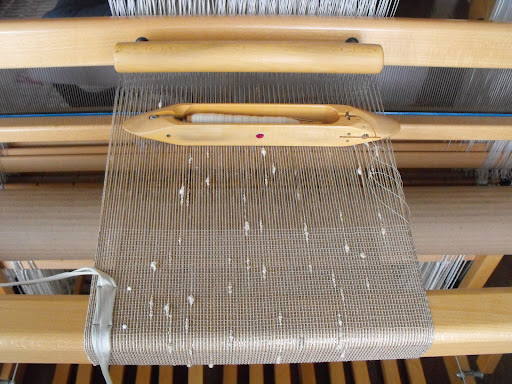 About halfway through the first scarf I started to notice that one side of the scarf was very tight.  So I added a piece of pipe insulation (a pool noodle or piece of foam would work too) to the back of the loom.  The warp was able to even out the tension by biting into the pipe insulation as needed and I was able to weave without hanging anything off the warp to try to even out the tension. 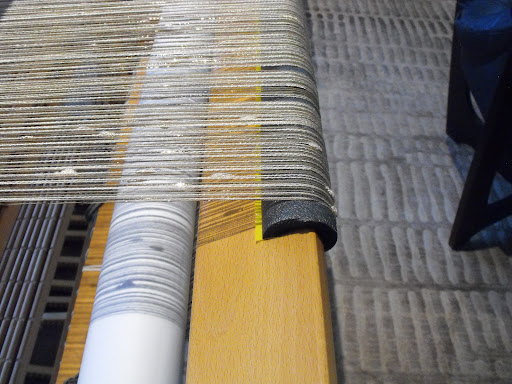 After the first scarf was finished I cut it off the loom and retied on for the second scarf.  The second scarf was woven just the same as the first.  Then scarves were hand wash in a mild soap and placed into the dryer for about 20 minutes but I stopped the dyer every 5 minutes to check and shake out the scarves.  Here are the final beauty shots of the scarf.  The scarves are light and airy with a wonderful shine from the gold Lumeya. 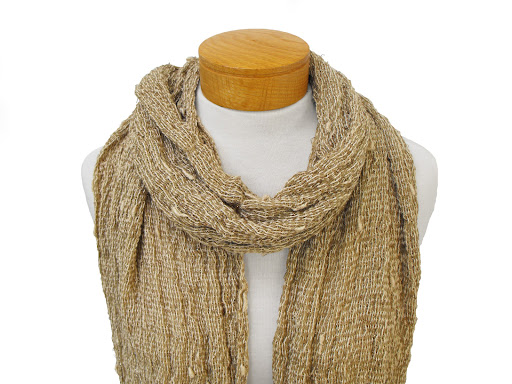 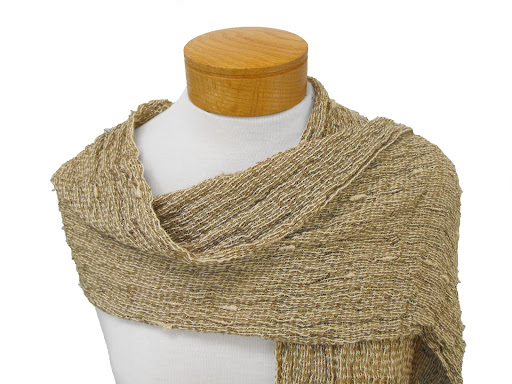 It is hard to get a photo in the winter sun showing the shine that these scarves have!  But the drape of these scarves is lovely and the soft brown colours of these scarves are just charming.  The Lumeya didn’t shrink at all, which isn’t a surprize but it made little loops that bring extra sparkle and shine to the scarf. 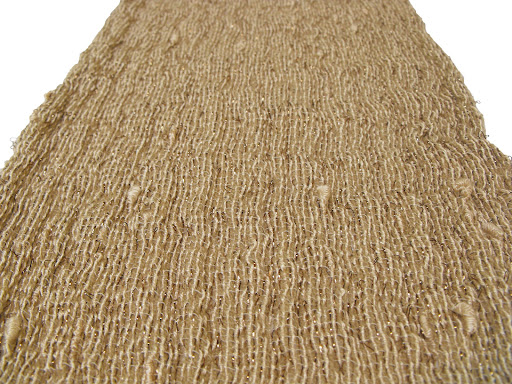 Final Garden Photo of the early snow that we got, La Nina is really feisty this year.  The Himalayan honeysuckle (Leycesteria formosa) was still in full leaf and flowering but this snow and cold snap is putting a stop to that.  But the glint of the sun shining off the snow reminds me of the scarves! 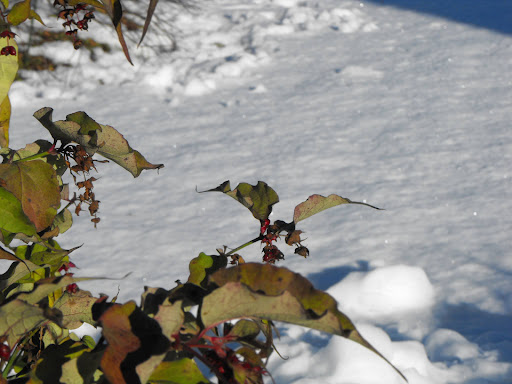