Designing By The Seat Of My Pants

As I typed the title of this blog, I thought, hmmmmm, where does that saying come from?  Well, Mr. Goggle tells me that to ‘fly by the seat of your pants’ is a saying from the early days of aviation when pilots flew by their judgment rather than by instruments which had yet to be invented.

This saying really epitomizes my trial and error style of creating these tea towels.....here’s how the story progressed.

I wanted to use 1/8 tow linen, just because it’s pretty and I had enough to make nice colour block tea towels unlike any I had woven before.  My goal was pink on one side, lilac on the other separated by green outlined in purple.  The colours were chosen based on the tow linen I had.  I had no idea of the weft at this point.  Like I said, seat of my pants. 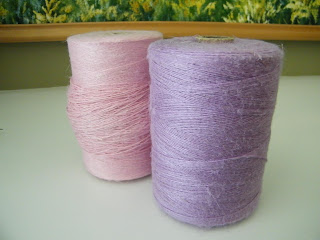 I planned to use the tow linen as the warp because it can be difficult to make nice selvedges with some types of linen and I thought to make my life easier by using some kind of cotton as the weft.

My original idea was to pull a warp of about 40 percent pink and 40 percent lilac with 10 percent other for the break in a vaguely St. George’s Cross pattern. 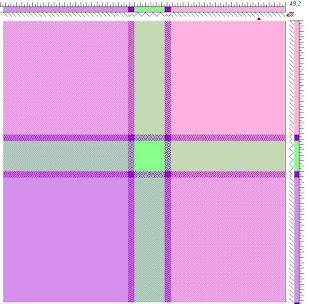 When I started to pull the tow linen and found that it was super fuzzy, way fuzzier than I expected and I knew immediately that it would have potential bridging problems.  There is nothing worse that a warp that will not lift due to fuzz sticking together; so out it came.  I would swap the cotton to the warp and use the linen as weft, changing on the fly! 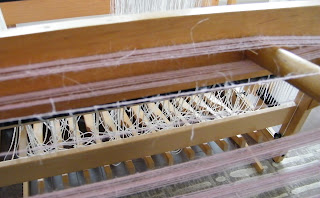 Searching the stash I found 2/16 unmercerized cotton in similar colours, some a little darker and a wee bit different tones, but close enough and it looked like I had enough at first glance. 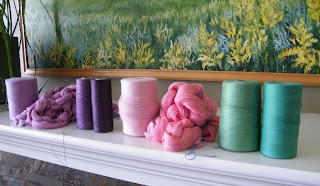 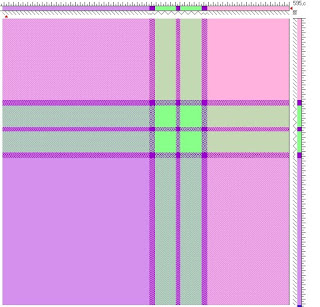 My initial thought was to just increase the number of lilac ends that I needed and so I created this draft where the cross is moved off centre and the whole shebang was more asymmetrical but still pretty close to my plan and pretty nice looking.

Back to the warping board with the lilac cotton and surprise, surprise...I ran out of lilac at 272 ends, exactly 100 ends more than the pink cotton, but far short of what I needed at 308 ends. So another iteration which increases the green and still looks good, but not perfect. 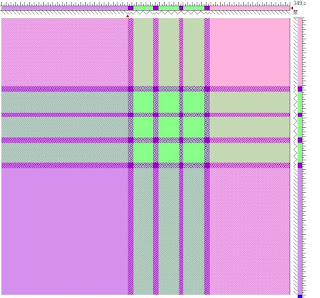 Gotta love PCW and the ease of changing a draft!  I started to increase the amount of green in the centre cross and to fiddle with the purple breaks and this is my final draft and I’m pretty happy with it. I decided to move a lilac stripe into the green and it now looks vaguely plaid; and still pretty. 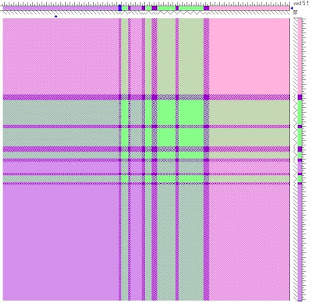 Your chosen colours are so pretty! I like the evolution of the pattern, although as a 'veteran' weaver you know that you are breaking all the rules 😎 You rebel you!

I'm looking forward to seeing how these turn out and wish you all success!

I'm not a weaver and have just come across your blog. Your weavings are so beautiful! I'm very impressed.