Finishing Up and Tour de Fleece

Finally, the Korndrall tea towels are off the loom. 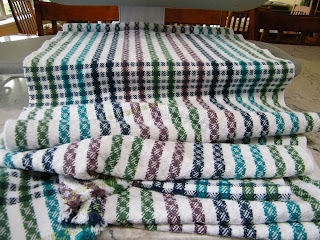 They have been washed, tumble dried with wool dryer balls and are now being pressed ~ can’t say enough about the dryer balls, they really do reduce the drying time considerably. 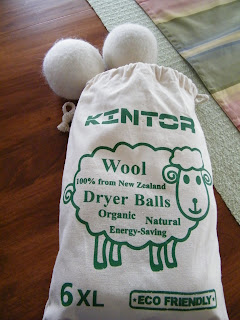 When pressing we use a Singer Steam Press which we affectionately call ‘McSteamy’; an homage to yonks ago and the first few seasons of Grey’s Anatomy. 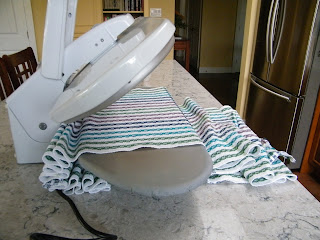 As with many weavers I began my love of fibre from wool spinning roots.  I began spinning wool in the 1970’s when I lived in Rotorua New Zealand.  Ahhhh, the good olde days!  I segued into weaving when the yarn began to pile up and I was looking for a beautiful and interesting way of using my handspun yarns.  Funnily enough, now I rarely weave with wool.

I still have the very first wheel I ever bought, which is a Nagy purchased in New Zealand, she is made from Kauri which was recycled from demolition and it is still one of the most beautiful wheels I have ever seen.  She spins beautifully, but with only one treadle it is slower to spin and takes considerable effort. 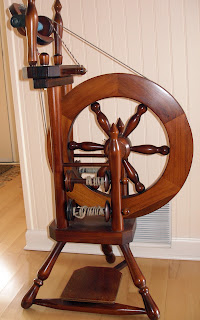 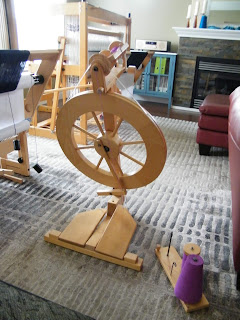 I find that now I prefer to spin on my Lendrum double treadle as she is super fast and just plain fun to use!

Spinning is on my mind today as I have just joined Ravelry’s Tour de Fleece!  The idea is that you spin along with the Tour de France during the month of July.  This seemed like the perfect time to haul out a rather geriatric Gotland Fleece that I have had stashed in a closet! 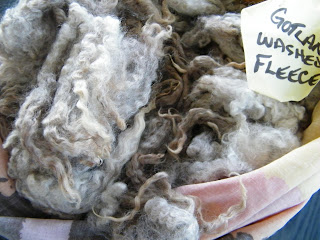 I washed the locks of the fleece several years ago and stored them in beautiful condition.  Sadly, after years in a cotton pillowcase they are a bit dry and slightly matted. 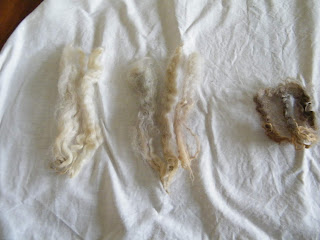 I have decided to split the locks into piles by colour and this fleece has given me three distinct colours.  There are lovely long, silky creamy white locks, medium long light grey/cream locks and much shorter, curly dark grey locks. 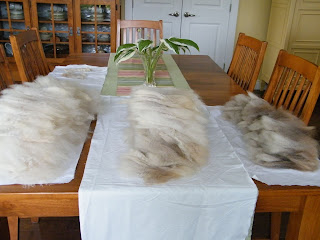 I am about half way through preparing the locks for spinning and as I finish a group I spray it with a little water in which I have dissolved some hair conditioner in an effort to add back some of the lost moisture and hopefully make the spinning easier. 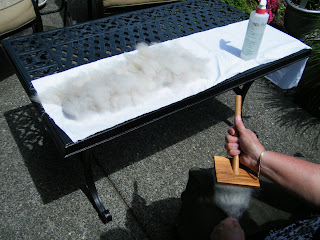 I have been using a flick carder and a piece of leather to open up the locks and it is working really well albeit slowly, but hey, it's all about the journey. 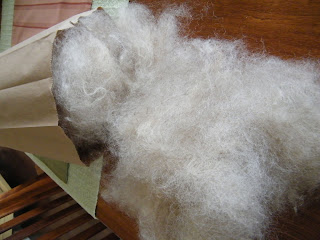 After flicking I am left with a bag full of beautiful wool puffs that have been pulled out of the locks.  I want to spin the locks as worsted (all the fibres in a line) and these bits of fluff are now prepared as woollen (all the fibres mixed up); so after I have finished the fleece I will spin this bit separately.

The garden shot for today is a shot from one of my perennial borders which are glorious right now, the tall pink flower in the centre is Agasache 'Sunrise Red' (Hummingbird Mint) and the low orange flower is Helianthemum hybid 'Ben Nevis' (Rock Rose), the tall pink flower on the right is Gaura lindheimeri 'Passionate Blush' (Wand Flower), and good old Alyssum for balance. 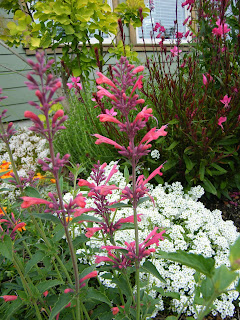 I'm so impressed with your ambition. I can spin for hours, but am not as enthusiastic about carding and prep.