The Tale of Two Scarves

I was doing a photo shoot for some new scarves in the Etsy shop when I noticed something about two of the scarves.  The scarves are Mum’s Drall scarf and my polka dot scarf. 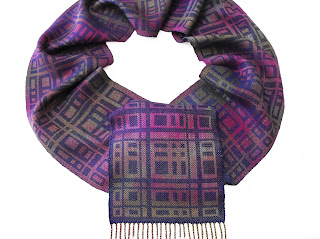 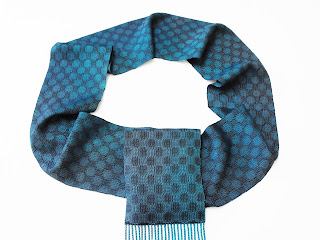 The scarves are both made from a hand dyed silk warp.  They are the same silk and both warps started at the same length of 100 inches. But in the below picture you can see that they are different lengths.  The purple drall is 67 inches, and the blue polka dots is 71 ¾ inches.  Sorry about the quality of the pictures they were taken at the end of the day and are a little dark. 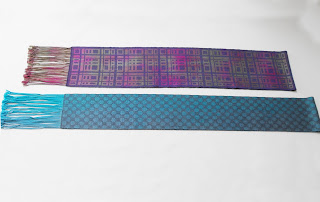 The main reason for the difference in length was that the drall scarf has a large pattern repeat so Mum had to finish at a certain spot so that the ends of the scarf matched.

The scarves are also two different widths.  They are the same silk and both warps are 200 threads, well they should be but Mum wound a couple of extra threads to make 208!  The purple drall has a finished width of 7 inches and the blue polka dots is 5 ¼ inches wide. 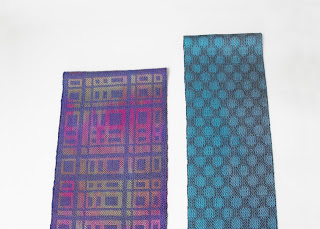 They are both set to 28 epi so the addition of 8 threads would only be about a ¼ of an inch.  But Mum used a 14 dent reed and sleyed two per dent.  I used a 12 dent reed and sleyed 2 2 3.  So there would be a slight difference but I think that the biggest factor in the different widths is that we used two different wefts.  Mum used a 2/8 Tencel and I used a 2/20 bamboo.

Now that I think about it the difference in the grist of the weft would also impact the length because of how much warp would be taken up with going around the weft.

We also managed to have different length of fringe!  Purple drall has a 6 inch fringe and the blue polka dots has a 8 inch fringe. 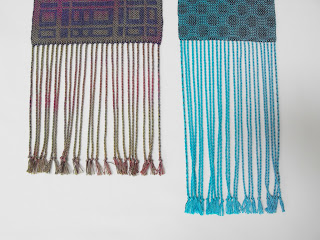 It is amazing the difference the weft choice has made in these two scarves!  Also the weave structure would have made a difference on the scarves.  The purple drall scarf is 3/1 twill structure.  The polka dot scarf is a network twill.  Just goes to show that every little choice makes a difference. 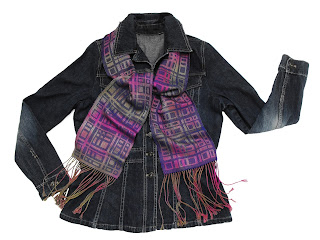 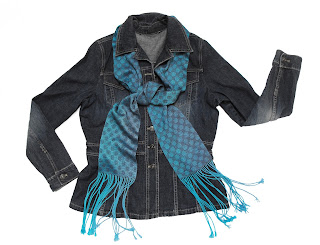 Final Garden Shot is the jumble of dahlias that are in the front garden.  They are a cheerful and colourful addition! 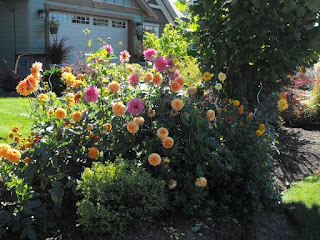