Anatomy of a Test Piece 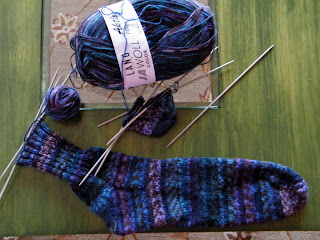 These socks are addictive! Once I learned to knit them from the toe up, using a short row toe and heel, I was away. So much fun! 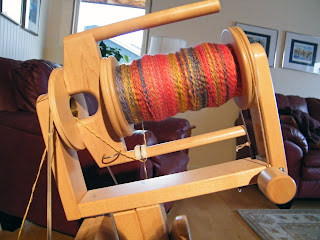 This is the other thing keeping me occupied during the long Canadian winter nights. I purchased a bag of Louet fibre 50% merino and 50% soy silk in June. The colour way was called Karioke and it's big and bright and bold to say the least. 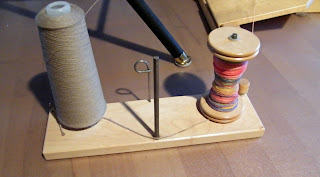 I'm now at the plying stage and I didn't want to get the barber pole effect, or to bland all the bright colours out, so I'm plying it with 2/120 cashmere. I've gone for a spiral ply effect, and at this point have no idea what the heck I'll do with it!

My Shadow Weave piece came off the loom last week. To be an acceptable GCW test piece it had to meet a few criteria.

I put on only 2 yards for this project and I sett my Shadow Weave at 24 ends per inch, so to achieve a 50/50 woven piece after wet finishing it must have between 23-24 picks per inch .
To ensure that my piece is 12” wide, I put on 17.6” of warp. As I was weaving I measured the piece on the loom and it was 16”wide with take up and it remained 16” after the piece was off the loom.
I need the piece to be 18” long after finishing, so I planned on 3” for the hem; half for turn under and half to frame the pattern. To make sure that the turn under wasn’t too heavy I wove an extra 1 inch with sewing thread. I wove two full pattern repeats and measured the piece and found it was only 14”, so I wove a third pattern repeat. With the 3” hem allowances at each end my piece was 28” on the loom when I cut it off. After it was off the loom and had a few minutes to sit, it measured 25-1/2”.

Since floating selvedges, tape selvedges or doubled selvedges are not allowed on the Shadow Weave question, it was important to maintain a good looking selvedge. To help with this I started by first throwing my dark weft from the right and placing the shuttle on the cloth, I then followed with my light weft again from the right. Now with both shuttles on the left I ensured that I put the light shuttle down on the cloth closest to the fell line and repeated this throughout the piece. This mostly ensured that both wefts were caught at the selvedge to give the feather stitch look that is a characteristic of Shadow Weave. When necessary due to the patterning I would manipulate the wefts to make sure the selvedge threads were caught.

Squaring the piece is partly done on the loom and partly done with pressing. If you have not tied your warp evenly you may get a smile (edge too tight) or a frown (edge too loose), both of these will make your piece appear long in the centre.

The overall look of the piece is important so that’s why I put a border around the pattern. I did the easiest of borders and added several twill repeats at each selvedge and repeated the same twill repeat 14 times to give my hem. 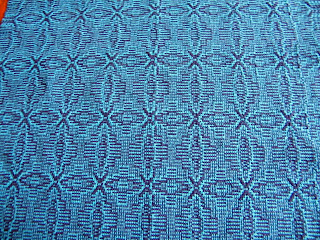 After vigorous washing, my piece had only 22 ppi. – not enough picks per inch……so back to the loom. 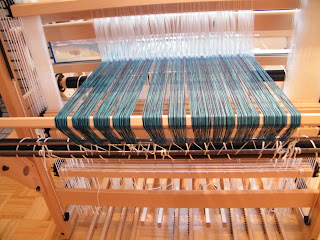 I had a good look at what warp was left on the loom and with only 32 inches left I decided that I had better look at re treadling the piece. The pattern I had originally chosen had a 7” repeat, much too long for the warp that remained, so I shortened the treadling to a 4” repeat. 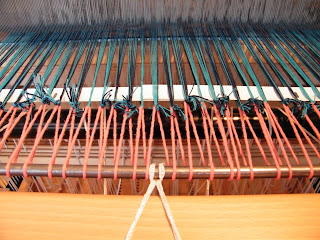 I then resleyed to 20 epi since there wasn't enough warp to do my regular tie on, I lashed the warp to the front beam. I then proceeded to weave a perfectly balance piece – but only just had enough warp to weave it 24”. 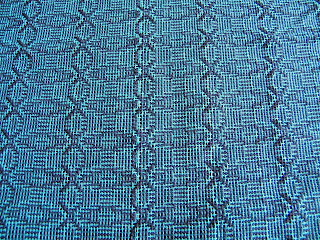 I haven't even washed the piece and I know it's too short. This bummed me out….I know there will be 20% shrinkage and I need to hem the piece, so 18” just won’t be there. 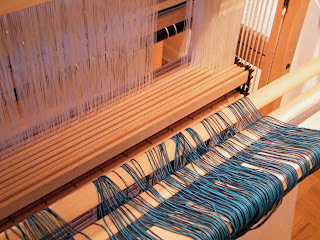 Today I pulled another warp of 3 yards – sett at 20 epi and using the same small pattern, third time lucky!

200 Patterns for Multiple Harness Looms, by Russell E. Groff. The layout of this book is excellent going from the least number of shafts needed to the most. Each page has a black and white photo of the pattern, a threading draft, a tie up draft and one or more of the possible treadlings. There are also very good notes about the warp and weft used and about the resulting fabric and often it's eventual use. Sometimes size constraints make finding all the information a bit difficult, but with perserverance you can find all you need to weave the pattern. The patterns are for looms having 5 to 12 shafts and I find this small book a real treasure to own.
Posted by Lynnette at 1:50 PM

Your shadow weave pattern is simply lovely! Hopefully third times the charm and you will have a piece to be proud of and send in.

Thank you for the review of Mr Groff's book. Its a fitting tribute as he just passed away a few days ago. What a loss to the weaving world...

It's great to see those colors together in shadow weave. I recently purchased yarn that looks a lot like that combo....and I might try to make a shadow weave scarf with it.

Bummer that your two pieces didn't end up being the right size, but they are beautiful at least. Hopefully the third time really is the charm!!

Wow! That's dedication. I love the pattern. Good luck with the next round.

So, what are you planning to do with the first attempts? Tea towels?

Such beautiful fabric! Sorry it isn't the size you wanted, but I'm sure you'll make something beautiful from it.

I'm not sure what I'll do with all my test failures. They are just too small to be good tea towels as I make mine 28"x30" minimum, I like them on the large size! My daughter and I are brain storming like mad to come up with uses - I just hope I don't continue to add to the ever increasing discard pile!

The shadow weave is simply beautiful. The requirements look very difficult to fulfil, I really hope it works out the third time.

Your shadow weave is so lovely!!! As is your new sock and yarn you've been spinning. Looks like you're keeping busy on these cold winter days and evenings.

Your shadow weave is lovely ditto the sock. Where in the world did you get such a big cone of Cashmere. Your yarn is going to be fabulous.