I liked doing Bead Leno so much that I decided to do it again, nothing like a little positive reinforcement! I had a ball of the multi colour Tencel leftover from the first Bead Leno scarf and half a bobbin but I wasn’t sure if there was enough for another scarf. I had to do some math to find out how much I had. Inside of the cone of Tencel is a sticker which says that there is 8400 yards per pound. After weighing my ball and some quick math I found out that I didn’t have enough so I would have to do some stripes. After some sketches of possible stripe placement I found one that worked for me. I had to keep in mind that the warp needed to be divisible by four because Bead Leno is based on four warp threads twisting onto one another. I also wanted to have the stripes separate; I didn’t want to have 2 colour threads with 2 black threads because I thought that the scarf might look muddy or blurry around the edges of the stripes. As you can see in the third photo my math was pretty close, all that I had left was a tiny ball of the multi coloured Tencel. 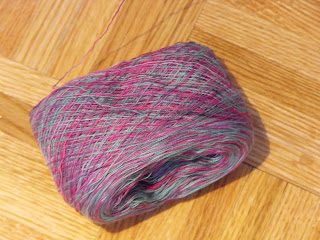 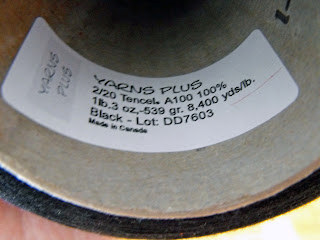 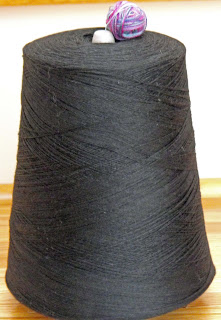 Onto the warping board . . . the board is backed with a towel because it makes it easier to see the threads as the board is placed on some shelves. The thicker pink yarn at the back of the board is there as a guide as I have to wind inch segments of my warp, it is there so I don’t have to remeasure three yards each time. Although when tying off the warp bundles I have to be careful not to attach it also! I use a large gauge yarn to tie the cross so I don’t lose it and so it is easier to see. Then to make double sure that I don’t loss the cross, I use smaller gauge yarn to tie the separate halves of the cross. I also use the smaller ties for the rest of the warp and I tie frequently, maybe too much, can there be too much?! 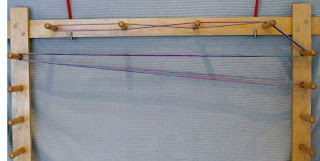 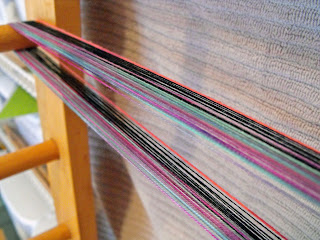 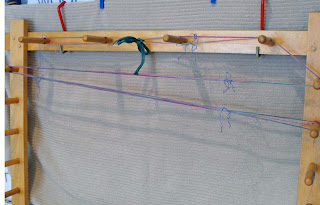 Here is a photo of my back beam, I can’t remember why we took off one of the back beams but it does make for a cool photo! 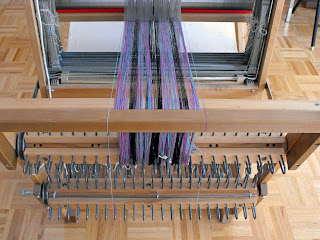 The tying on of the front beam was a little tricky because the multi coloured Tencel and the black Tencel have slightly different weights and so the tension was hard to get even. Also the groups that I did for my tie up were too big so I had a lot of space between them; thankfully I had planned for a fringe of 10 inches so the Venetian blinds helped to close up the spaces. But what really helped was the adding of the wool header, which I use instead of hemstitching. 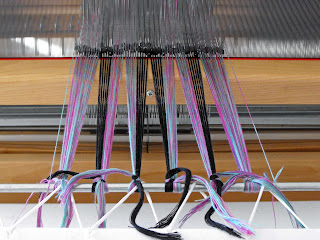 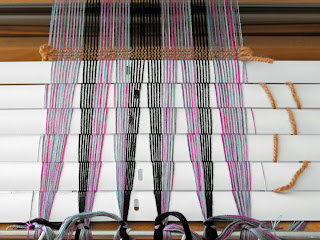 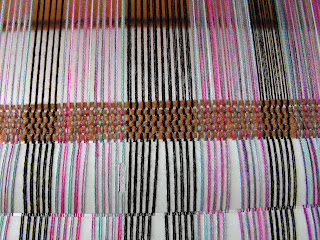 The first Bead Leno scarf that I did I used a 12 dent reed with the spacing of 4 – 4 – 4 – 0 – 4 – 4 – 4 - 0 etc. In the finished product the sleying pattern showed up and while I liked it, I thought that this time I would change the sleying. To change the sleying I had to also change from the 36 epi that I used with the first scarf to 40 epi. For this scarf I used a 20 dent reed and the spacing was 4 – 0 – 4 - 0 etc. It has made for a more gauzy fabric. I am looking forward to concluding the weaving and seeing the finished product. 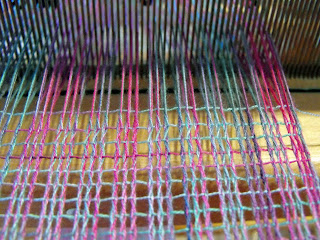 Picture of my first scarf at 36 epi. 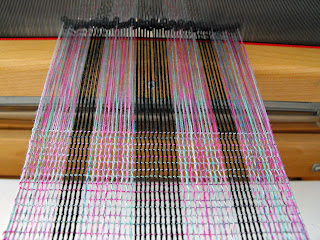 Adding the black really makes the other colours pop! It's so lacey and light...

I see I'm definitely going to have to try one of these..

Very nice!!!! I like the color and black combination....in fact, it would look very good with what I'm wearing at the moment!!

Bead leno is one of the workshops I can sign up for at the New Hampshire Weavers Guild this spring. Seems interesting!! I still can't picture how it works....need to see it in person I think!

I love the black stripes!!!