Our Guild Study Group ‘Exploring More’ has decided on our new topic, which will be ~ Weaving Layers.
This led to much discussion about the scope of the topic and we decided to paint it in very broad strokes.  For our purposes we decided that we could explore Pique, Finnweave or Doubleweave to name a few. 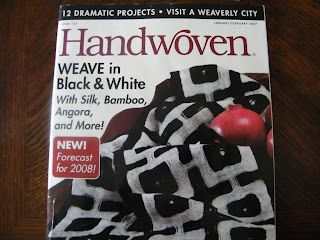 I have been wanting to explore Deflected Doubleweave for some time, so the article in Handwoven January/February 2007 by Madelyn Van Der Hoogt on page 68 caught my eye as it is really graphic.

I plan to weave two scarves using two colours of silk, natural coloured 30/1 tussah silk and the other is soft chocolate 30/1 bombyx silk.  Due to the fine grist of the yarns I chose to weave at 40 epi in a 20 dent reed with 2 ends per dent, rather than what was suggested in the magazine article.

I have used both of these silks before with really lovely results. 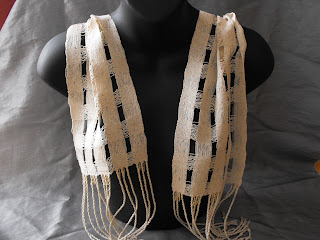 The natural silk was woven in squares and I used leno to ensure that the square stayed in place.  I was lucky enough to have this scarf published in Handwoven May/June 2011. 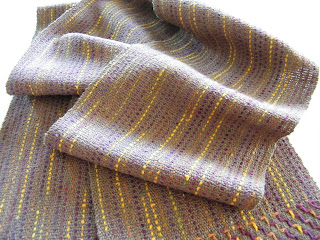 This is the chocolate silk woven with heavy raw silk streaks in the warp. 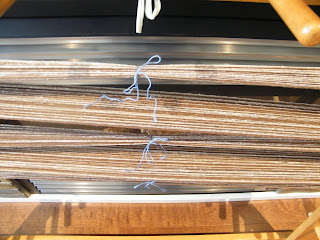 I pulled the warp in two sections and the first section sat on the warping board overnight.  The next day I made the second section and immediately started warping the loom. 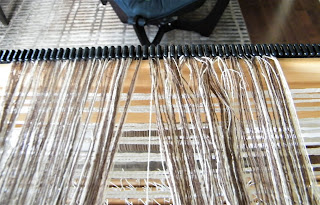 As I started pulling the warp, which is 4 ends of chocolate and 4 ends of natural; a snarling, bridging grabbing problem started to rear its ugly head.  I was completely taken aback because alone, neither of these yarns caused any problems when I used them previously.

These yarns did not get better after they were on the loom, just sitting on the lease sticks the warp ends bridged together. 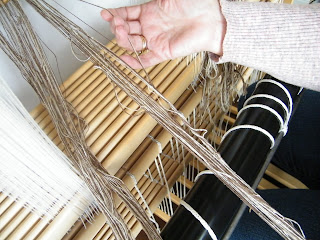 And each individual thread had to be teased out of a curling mess!  Not fun at all. 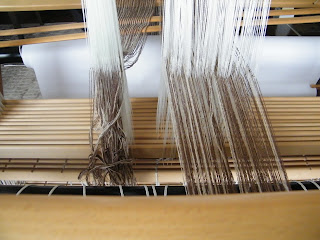 I’m halfway through pulling the warp through the reed and now I’m questioning whether I should have gone for such a fine reed, but only time will tell.  It was a conundrum, if I put 4 ends together in a 10 dent reed, the warp would have more twisting opportunities but 2 ends in a 20 dent reed mean they can stick more.

I rarely follow a weaving ‘recipe’ but this time I am while I learn the in’s and out’s of Deflected Doubleweave.  I have put on enough warp for two scarves and the second scarf will have an original treadling sequence so I can make two different scarves.  At this point its ‘fingers crossed’! 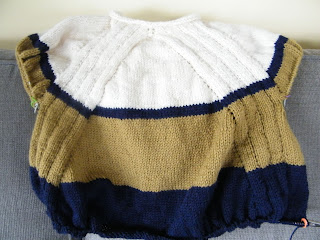 My sweater is progressing at a snail’s pace right now, each circular row takes me 30 minutes to knit and this navy is really hard to knit at night, so I'm just doing a couple of rows a day.
Posted by Lynnette at 2:31 PM