Deflected Double Weave is a two shuttle weave; in this case I have one pirn filled with 2/8 plum Orlec and the other pirn filled with 2/10 cotton.  Before starting to weave the scarf it is important to make sure that each end feed shuttle has the correct tension for the different yarns.  I had to increase the tension for the 2/10 cotton, always remember to tighten BOTH sides of the tension plates in the end feed shuttle! 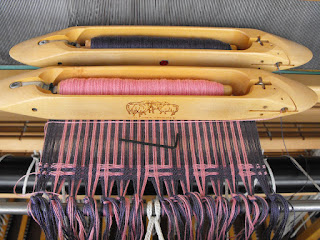 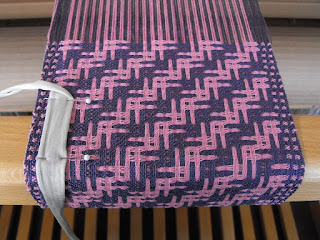 In a close up of the weave, you can see the layering effect between the two colours.  It is also interesting how the pink cotton is holding its square shape but the plum Orlec is filling in.  I think when the scarf is finished the final look is going to be interesting. 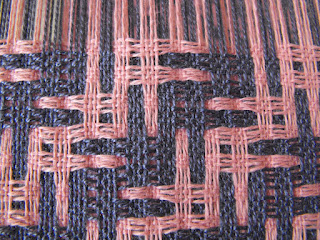 I am actually quite surprised how fast the scarf is weaving up.  I thought that the switching up between the two shuttles would be annoying but there is a nice rhythm to it.  It also helps that the scarf is pretty and the back is just as lovely! 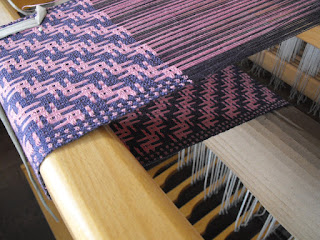 I’m not sure what the scarf is going to look like after washing, but here is a before photo of the scarf just off the loom.  I know that the cotton and Orlec will shrink differently so I lightly braided the fringe before washing it.  I will unbraid the fringe while it is drying so it doesn’t wrinkle and after the scarf dries I’ll twist the fringe. 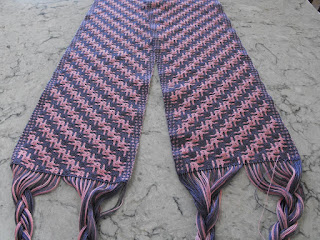 This is a pretty and cheerful scarf.  Forgive me, I have not yet twist the fringe nor given the scarf its final pressing in the photo below, but I have washed it. 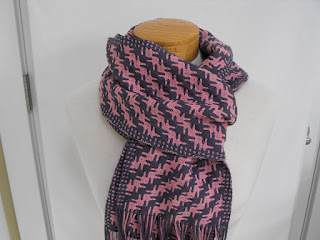 There is just a little bit of differential shrinkage between the two fibres of cotton and Orlec.  It has created a slight puffiness to the Orlec which I think is charming.  You can also see the edge treatment, I used a pink floating selvage on the left side and just skipped the four plum picks, and it is a fairly neat edge.  The other side was the plum side and you can’t see anything. 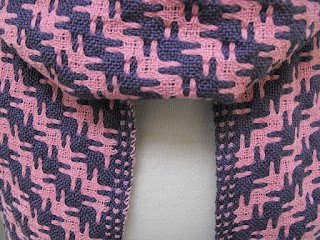 Overall I enjoyed weaving this scarf and I’m not sure what I’ll be weaving next but I do know that it is going to be something using this fascinating weave, Deflected Double Weave.

Final Garden Photo is pretty little tree called Red Bells (Enkianthus 'campanulatus').  The leaves are going to pop up any day now and behind the tree you can see the red haze of new leaves on the neighbours’ maple tree. 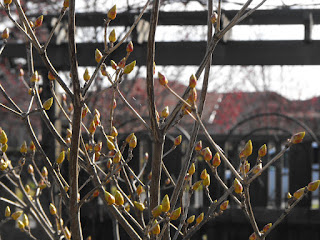 Could you please share your draft or tell me where I can find it?
Thank you

Brickerbrac, you can find the pattern in Deflected Doubleweave through Handwoven as an e-book.