After plodding along at what felt like a snails pace for the past week I have my ‘Deflected Double Weave Blocks in Rosepath Order’ (whew, what a mouthful) scarf off the loom. 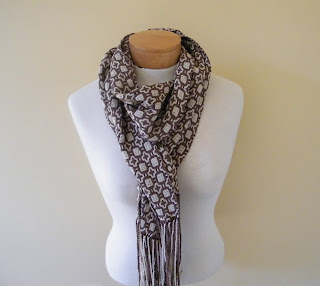 I not only learned what my pattern is called, but I learned so much about this double weave method.

The first problem with this weave began right away with my yarn choice ~ because I have 40 ends per inch and because those ends were lumpy and bumpy yarn ~ I could not pull the weft through the bouts to hemstitch, nope, didn’t want to slide through at all!  Lesson learned: be very careful of yarn choices. 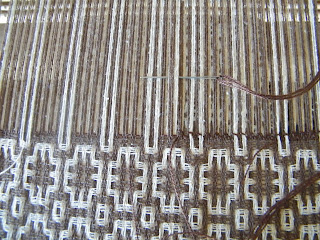 To make hemstitching possible I introduced a smooth 2/16 cotton yarn for my first few picks and then used that yarn as my hemstitching yarn.  The end result is not really very noticeable.  Lesson learned; you can use supplemental yarn for hemstitching. 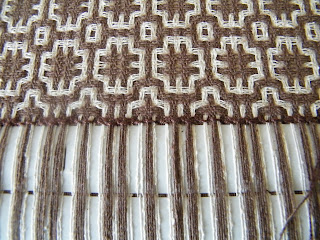 As I started the scarf I was doing my weft changes as I would have done for any other sequential weft change; I captured the latent weft each time the dominant weft passed it by. 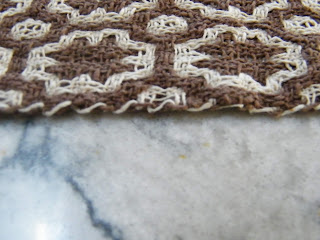 The selvedge created was not very pleasing due to the slubby nature of my weft yarns.  The constant weft change and the randomness of where the slubs would appear made it really heavy.  Lesson learned: don’t fuss with the selvedges when you are learning a new technique. 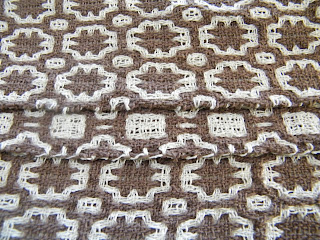 I abandoned this type of yarn twining after a couple of pattern repeats and allowed the latent weft to just pull up over the four picks of dominant weft without twining.  This is only noticeable on one selvedge and although not a thing of beauty it sped up the weaving and stopped me angsting over the selvedges.  Lesson learned: what works on one weave structure doesn’t always transfer to another weave structure.

The pattern itself was relatively simple to treadle, but it was a slow weave due to changing wefts every four picks..... and the stickiness of the yarn did make me slow down to ensure there wasn’t any loops at the selvedges.  Lesson learned: I like one shuttle weaves! 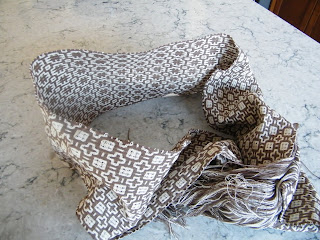 When the scarf came off the loom it was as stiff as a board, but washing took most of the silk sericin out  and now it is lovely and supple. 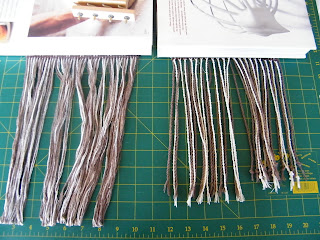 I am not a fan of the ‘candy cane’ effect that can happen when fringe twists include yarns with very strong contrasts, so each layer of the double weave structure was twisted separately.

I wove this scarf at 8 inches in the reed and the finished width is 6 7/8 inches, so quite a lot of shrinkage in the silk width-wise.  I wove the scarf to 68 inches on the loom and after finishing it is 61 inches, so a whopping 7 inches of shrinkage!  The scarf weight just over 5 ounces, so nice light weight.  Lesson learned: this silk shrinks like crazy! 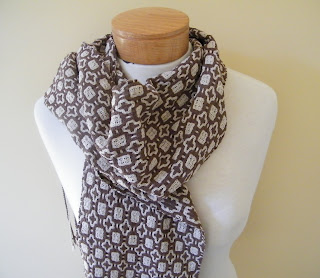 Ah, but the result is really lovely.

There is time to enjoy a bit of baking right now.. I used an apple pie filling I froze last September with a Kolacky dough I made last week, et voila....yum! 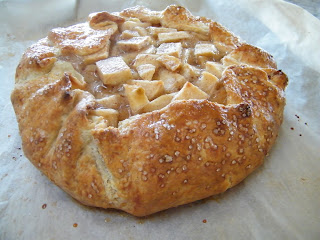 Thanks for sharing your lessons learned! Maybe they'll help me remember that learning from something, even if you don't like it, is valuable. And the scarf is lovely. But that bread - YUM!!!

That's a lovely scarf! I'm not always a fan of deflected doubleweave but I like yours. Not tried it yet myself, as I've only been weaving since October. Thanks for sharing!

The scarf is a visual delight!..... as is that lovely apple pie. We'll just have to admire from afar for now....

Thank you for sharing your lessons — it’s really helpful to understand other weavers thought processes :) and its a lovely scarf!