My guild study group is exploring ‘weaving in layers’.  I am not really interested in deflected double weave but I felt that since I’ve never woven double weave that I should take the opportunity.  One of the few types of double weave that appealed to me was woven pockets with sequins inside.  I found some pretty heart shaped confetti that would work and off I went. 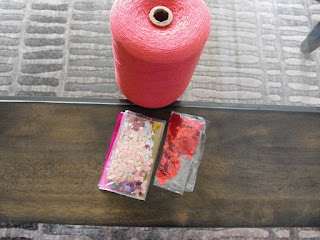 For the scarf I used 2/20 cotton in coral pink set at 30 epi, which ends up being a lot of threads for a scarf.  The yarn was well behaved so it pulled on very nicely, which was a relief after the disaster of Mom's silk warp.  I unfortunately missed feeling a factory made knot as I was pulling the warp, so I had to replace the thread. 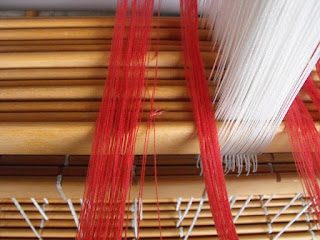 After hem stitching the ridiculously tiny bouts of thread, I wove about an inch so I could see the double weave pockets in action.  So cute! 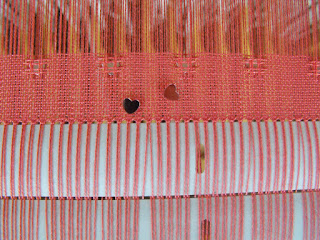 The original pattern was 6 shafts and 7 treadles so I was able to add an extra offset pocket making the draft now 10 shafts and 12 treadles.  The original draft is in Handwoven Jan/Feb 2002. 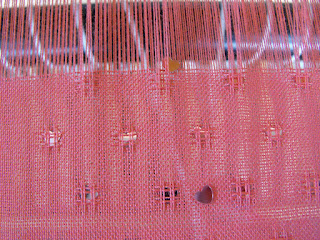 The lacy pockets are the double weave structure; the threads are woven in two separate layers creating the pocket.  I used a needle to help push the tiny heart into the pocket; it was hard to wrangle them into the pockets. 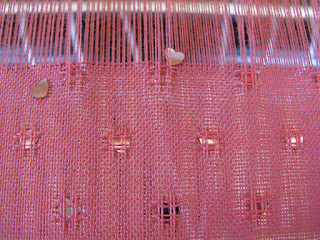 The scarf wove up fairly quickly and I was surprised at how much I enjoyed weaving it.  The shine and sparkle from the hearts was quite exciting to see growing along with the scarf. 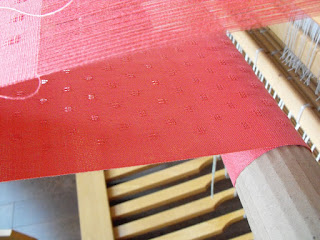 I was at the finish line for the scarf, with just 2 inches left and I had a thread at the right edge start to fray.  It was weird, the thread split along the ply and half of the thread frayed so a replacement was needed. 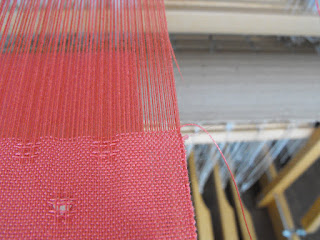 Off of the loom, the scarf is as stiff as a board but as light as air.  The stiffness seems to be from the plain weave structure not from the sequins.  The sequins are quite small but boy, do they add a lot to the scarf!  I counted and there are 534 sequins. 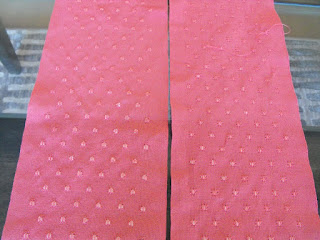 I used a pressing cloth to iron the scarf as I wasn’t sure how heat tolerant the plastic hearts are. 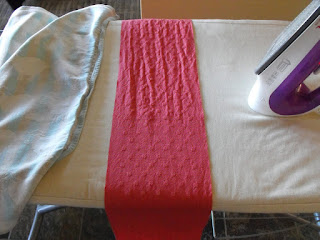 The scarf is really pretty, the hearts just gleam.  I’m really excited that this is going to be my scarf! 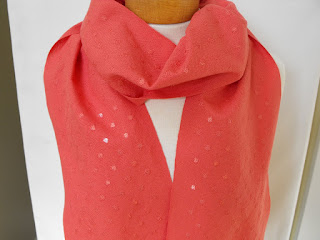 One thing that I am surprised about is how covered the hearts ended up.  I was a little worried that the hearts may fall out of the pockets but after the scarf was washed and fulled you can barely see the sequin or the heart shape at all.  When you run your hands over the scarf you don't feel the sequins at all, just a slight raised area, there are no bottom points of the heart poking through. 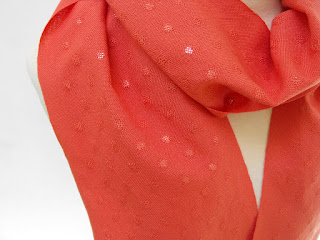 Final Garden Photo is daffodils and Jupiter’s beard (Centranthus ruber in red and white).  We are having an unusually cold March, which is being dubbed ‘Marchuary’, but the daffodils are lending an aura of hope! 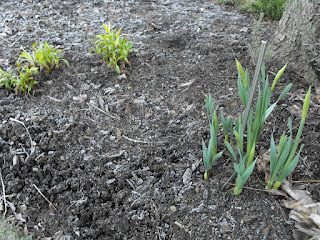