Finally I think I’ve got a handle on the gardening and house maintenance for awhile, so I’ve actually sat at the loom for the last couple of days.

I have had a warp on the loom for quite some time.  I made some tea towels in January and they turned out really well.  I decided that I loved the pattern and I decided to amend the warp making the stripes and squares larger.  That was an unmitigated disaster as the edges were so uneven and bumpy due to the weave structure.  I had fun cutting the weft out.  I decided to leave the warp in place, but to re-thread and re-design.  I chose to keep the same tie-up.  This is the final draft, not the one I had thought to use originally. 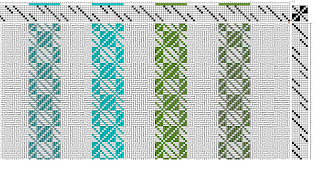 The new stripes are almost exactly half the size of the original and so there was some warp thread manipulation happening. It was a bear to thread with all the crossing over. 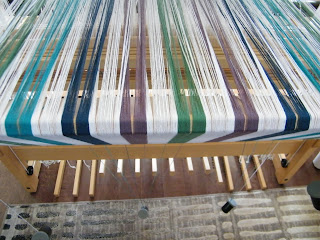 On every coloured stripe there was one extra thread that had to be left dangling, to keep up the tension I’ve just hung them together with a weight. 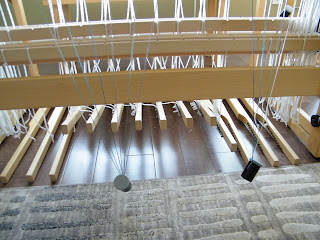 I’m a sucker for stripes so these tea towels have 5 thin stripes at one end.  I tried to do stripes of varying thicknesses, but with the pattern it just looked odd, so five even stripes looked the best. 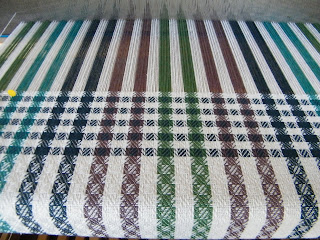 I love a shot of the warp wrapping ever so neatly around the beam. 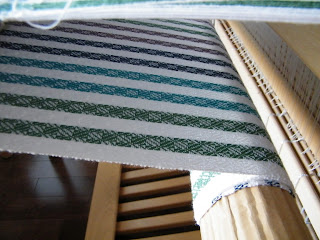 Today I got this big boy, and I do mean BIG, delivered.  The roll of one sided cardboard is 3 feet wide and 250 feet long and Ngaire can't get her arms around it.  Yikes! 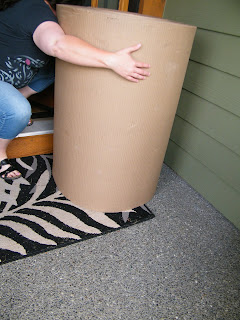 I ordered it to replace my current cardboard that I use on the front beam to make sure that the tie on knots don’t distort the first few wraps on the breast beam.   As you can see, my old cardboard is really
thrashed. 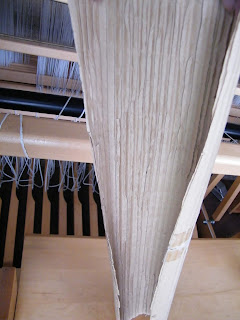 I will also use it to replace the paper rolls that I use for beaming and offer the extra to other weavers who may need a few yards for their looms.  Otherwise I may have enough cardboard for this life and the next! 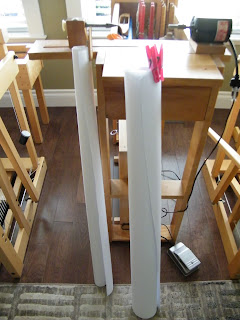 Today I have two beauty shots for you.  This is the first dessert we made using dome moulds for Mothers Day.  It is frozen lemon cremeux with a lemon shortbread crumb and lemon curd.  It was so yum! 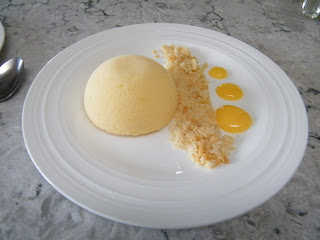 Todays garden shot is of Siberian Iris (Iris sibirica) at it's very best this week. 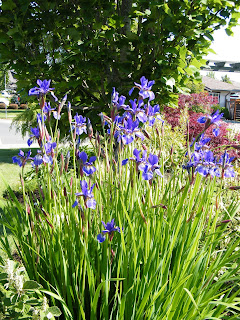 That's a nifty draft and it has a nice crisp effect with the stripes and white. That's some roll of corrugated cardboard! I use a round of warping sticks to even out the knots and other lumps and it takes about 7-10 sticks and its all good..... and I can reuse them for ever!

Lovely irises.... such a classic.