Sadly, I have only recently learned that the Dutch weaver Erica De Ruiter died in March; Erica specialized in weaves that use 4 or fewer shafts.

Although I did not know Erica, I was always excited when I found one of her articles in Handwoven Magazine and I thoroughly enjoyed her book ‘Weaving on Three Shafts’. 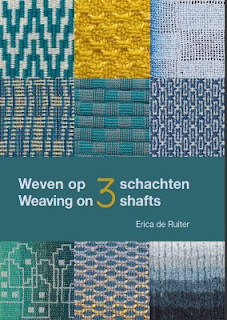 It seems that Erica’s goal was to reduce weaving to the simplest number of shafts and still get the most beautiful result.  If you can get your hands on a copy of this book I would encourage it.

In an effort to honor Erica I thought that I would share two of my very favourite articles by Erica, one in Handwoven Magazine and one online at WeaveZine.

In the November/December 2007 Issue Erica’s article entitled Three Towels ~ or One Wall Hanging ~ or Both; is such an exciting idea. 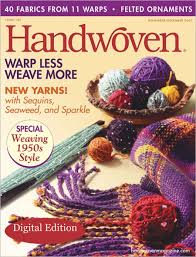 The premise is that you can weave three tea towels (3 yards of cloth) and then with clever folding and a dowel you can hang it on the wall of your kitchen displayed as a Kimono. Then when you feel need for a change, you can cut it apart, hem the ends and use the tea towels for many years.  This is mind blowing for me, and I think shows just how inventive Erica De Ruiter was.  Due to copyright  I cannot show you any photos, but luckily, you can purchase this magazine from Interweave Press as a download.

The second really special and completely inventive article can still be found on WeaveZine and it was written by Erica in September 2008.  This is a recipe for making a Spiral Zipper Bag using a long zipper and a length of inkle band.  I found this so interesting and I have had it on my Want To Make list since I first found it.  I am inspired by Erica’s ability to think in a non-linear way and to create beautiful and functional items in ways that I had never considered.  I have included the link to WeaveZine here.

Our weaving community is much poorer since March and I will miss the joy of opening up Handwoven Magazine and finding one of Erica’s gems inside.
Posted by Lynnette at 5:08 PM

A beautiful Tribute to a great Weaver. Thank you for posting this.