I think that I am using almost all the weird and wonderful shuttles that we have weaving these piano scarves. For the hem I am using black 2/20 Cotton/Tencel to reduce the bulk and I am using an end feed shuttle, although I just took a picture of the pirn because Mum is using both shuttles for her tea towel warp! 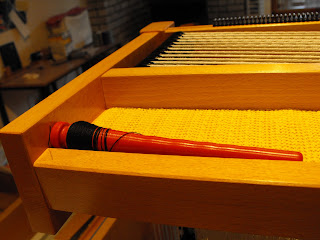 At the ends of the scarves I am doing a solid black section to represent the piano and to give a clear definition of the keyboard. I am using black chenille and I am using a LeClerc doubling shuttle because the rest of the scarf is done as clasped weft which is a double pick so the end of the scarf needs to be done doubled also to give the same weight and look to the scarf. I am not using floating selvedges so throwing the shuttle twice was not practical. 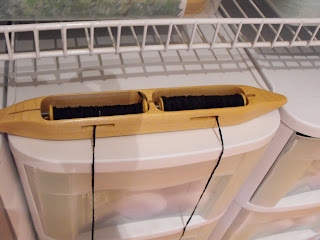 The other shuttle that I am using is the Howell’s Little Man because it has the longest bobbin, 8¼ inches. I can get all the white chenille that I need for one scarf on the bobbin. The shuttle is also great because the side slit is as long as the bobbin so there is no pulling on the yarn as it comes out. On some shuttles the opening is too short and the angle that the yarn is forced into stops any movement. 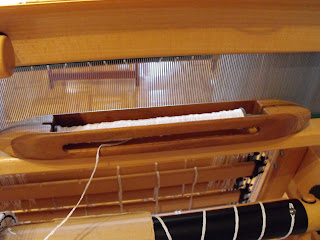 One of the great benefits to clasped weft is that the second weft is used when it is still on the cone, so my fourth shuttle is actually a cone sitting at my feet! 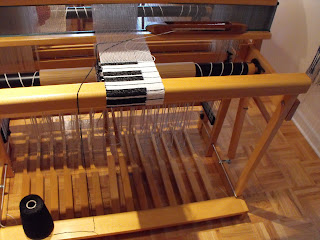 Disaster has struck, I have run out of warp and I still need to weave 20 inches. The warping bar is touching the heddles but if I can extend the warp I can finish the scarf. So with my Mum’s help we cut each warp thread and knot a purple thread 40 inches long to either side of the cut warp thread. 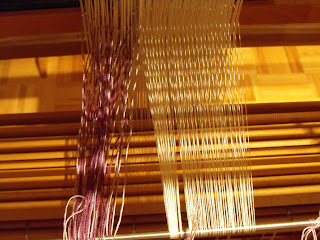 The view from the back is not so bad but the front is scary. To keep the back neat and tidy we pulled the warp forwards and it looked like a tangled mess. 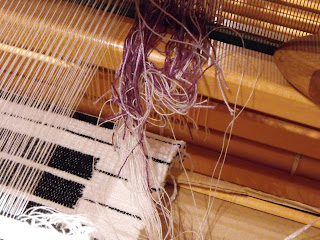 It look a long time to finish because we had to be careful to make sure that the extender threads were the same length and that we were knotting at the same length also because it affects the warp tension. But I was able to finish the scarf although I had to shorten the scarf by 6”. By the end the knots were just touching the back of the reed! 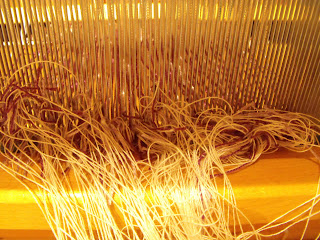 Because the scarves are two different lengths I don’t feel that I can give them to the person that commissioned the scarves so I am planning on doing the scarves again; this time I'll be using 100% chenille. 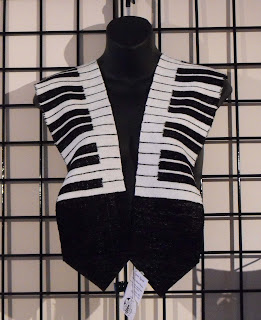 The scarves look fantastic and overall I am happy with them. They are very striking and make for a very graphic punch when placed with the other scarves that we have for sale.
Posted by Ngaire at 6:23 PM

What a creative solution to your problem! That is a stunning scarf.

Love it! The kind of scarf that looks awsome from a distance.

Could you tell more about how you extended your warp.

The scarf looks very interesting and will sell well I would think. Maybe some more commissions !

It's turned out brilliantly, really effective. What a shame about the warp - but a good excuse to make more scarves.

That is truly gorgeous! I love the way you hemmed the ends in the V - it adds to the beauty. At first look, I thought it was a vest on the bust.

Looks great and a good way of using the clasp weft technique!