Clasped Weft ~ Music from the Loom

I received my first commission for scarves in November but I couldn’t blog about them earlier because they were destined to be Christmas presents. But I wrote the blog as I was doing it so here is the blog in the present tense because when I tried to put it into past tense it read really funny/bad.

The commission is for scarves that look like a piano keyboard, which is a really nifty idea. The idea is to use clasped weft because it would be the same on both sides, if I used double weave one side would look like a piano but the other side would have the colours reversed.

The warp is 2/20 Cotton/Tencel because I am hoping that the white warp will be hidden by the chenille that I am using for the weft. The picture below shows the warp and the clasping of the wefts. 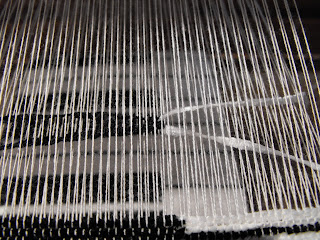 I actually sampled, I had to because I wasn’t sure if the weft was going to cover the warp and I had to figure out the pattern, and I wanted to have the keys the correct size after washing. I don't have a piano, so I went to the internet and printed off a real keyboard. I copied it exactly, right down to the note/half note placement. I did two samples, the first I had black chenille as my floating selvedges because I was trying to hide the black chenille going up the side when I didn’t need it but it just looked messy on both sides, so I nixed that idea. The second sample was without the floating selvedges and it looks cleaner and I also changed the pattern a little. In the picture below is both samples, the first sample is the background and has been washed. The second sample had not been washed so I could get an idea of the shrinkage. 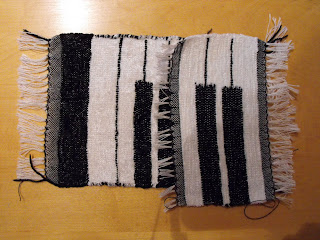 I developed the pattern on the warp because there isn’t a really good way to graph the keys. I used a picture of a keyboard and carefully wrote down the pattern. At the end I had the main pattern repeat having steps A through X, with a step having 5 to 8 picks. It is a long repeat and it takes me about an 1 hour to do, by the end I was a little faster but it was still slow going. 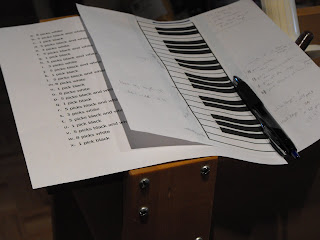 Here is a little peek of the scarf. It looks very neat! 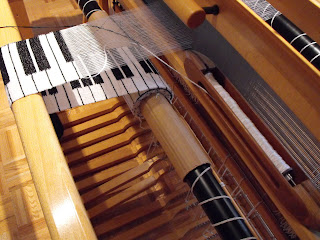 The first scarf is finished, although still on the loom, and I am starting on the second. Watching a piano grow on my loom is a little surreal but fun! Stay tuned, the second installment will be soon!
Posted by Ngaire at 4:27 PM

It looks absolutely like a piano keyboard! Well done Ngaire!

This needs to be submitted to Handwoven!

What an awesome scarf that will be!

That is super cool! My piano teacher would love that!

I love it!! Thanks for letting us know your thought process.
Ann in MO

OK, that is VERY cool!

That is very cool!!!

Wow - what a great scarf! It would make for a great Handwoven article. hint, hint.

I'm blown away by how fabulous those scarves are. I'd definitely second the article idea.

OMG, those scarves are STUNNING!!! I haven't done any clasped weave, so just that part is amazing to me. And all that planning!

I definitely agree with the Handwoven submission!

What a lovely commission to get! How nice the way you have kept your blog post up to date whilst weaving for later publication. The scarves look stunning!

I have been searching for a pattern to make these piano scarfs for a group (www.hugsnbugs.org) who uses the proceeds for music therapy for families who have children with cancer. I started weaving a couple of years ago when I became employed at a Historical Museum as a Living History Educator. I believe you have a loom with many shafts. Is there a pattern available for a 4 shaft loom? Please email me at krf13@att.net Thank you. :)