Snoflake Twill ~ A Fresh Snowfall of a Scarf 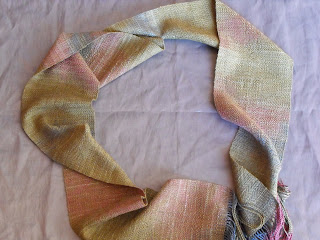 With the Snowflake Twill Scarf off the loom, I faced a little problem. The warp had been hand painted so there was a lot of variation of colours in the fringe and I didn’t want to end up with a candy cane effect in the fringe. So my solution is to make a fringe with lots of thin twizzles. If I could go back and repaint the scarf I would make sure to paint the fringe area in one solid colour. 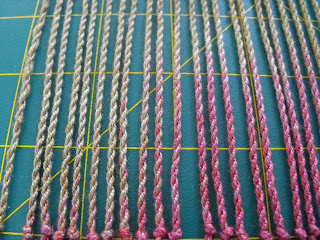 The fringe looks really nice, the colours are clear and there is only a little candy caning but it only really can be seen close up. Because there are so many twizzles in the fringe and so many colours I don’t think that I am going to be beading this fringe. 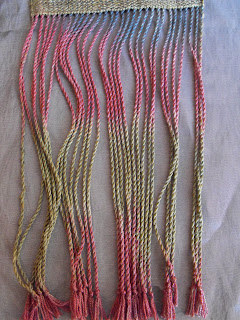 The scarf is a really interesting piece. The plum and navy splashes highlight different parts of the pattern which makes it truly attention grabbing. 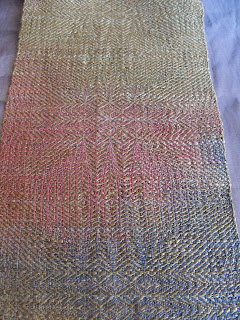 Weaving this scarf was a challenge because each snowflake has to be the same size. It was all about having the same beat every hour of every day of weaving which is really hard to do. I took a lot of measurements as I was going but I still had to do some unweaving! But the effort is really worth it; in both the scarf and my new awareness of my beat. 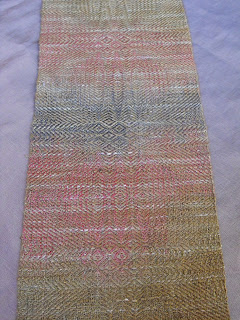 The scarf has a lovely drape; it makes an almost liquid puddle. After washing that scarf was really stiff but after beating the scarf against the couch the gorgeous drape magically appears. 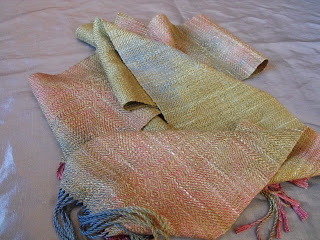 I learned a lot about weaving with this scarf. I learned how to design a snowflake twill; it is almost as much fun watching the snowflakes appear on a computer screen as weaving one is! I also have a new awareness of my beat which I am going to be developing and improving this year, I hope!
Posted by Ngaire at 11:58 AM

The soft pastel shades are beautiful! I think the lighter shades are often under used by weavers.

The snowflake is accented nicely by the shifting colours. I am slightly biased towards snowflake twill progressions!

This scarf turned out absolutely beautiful. The colours sucked me in and then I found myself staring at your pictures checking out the pattern and colour changes. Lovely!

That is really lovely and the fringe is beautiful. I don't see any candy-caning from where I'm sitting, just a gorgeous snowy sunset.