Today in Coldstream, in the Okanagan Valley of British Columbia, it’s hot, hot, hot! We are sitting at 37 C in the shade, but of course, around my house there is no shade! Seems that we’re either too hot or too cold, it’s never just temperate! 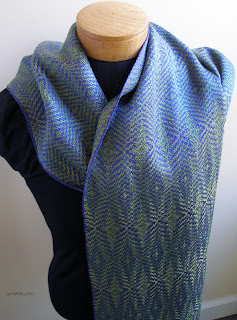 I’ve done the bead work on Echo # 2 which I’ve renamed Manley. Why, you ask? Well, it does remind me of the colours of Manley Harbour in Australia, but also I think this scarf would look great on a guy. The diamonds are very graphic and the colour is stunning, there is just enough beading to make it interesting and who says guys can't wear beautiful scarves anyway! Again, my camera just doesn’t do it justice. 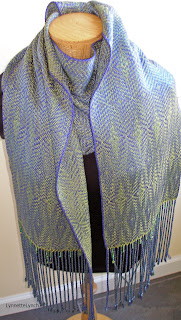 This is the weft faced, lemongrass side which is just the reverse of the blue warp dominant side. 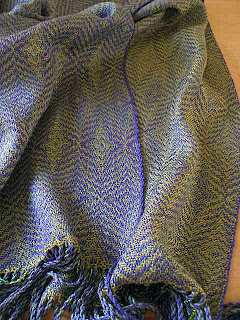 Side by side you can see the difference and the iridescence. 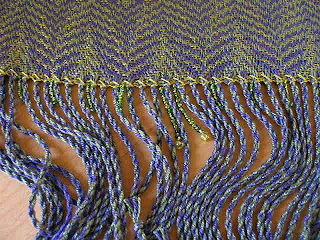 I’ve finished the selvedges with a blue Tencel cord and then lightly beaded the fringe with green and blue beads. A much understated finish for me! 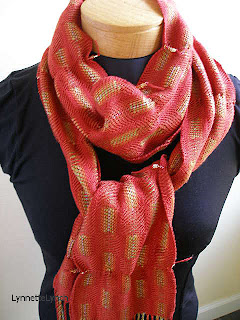 Do you remember this Tencel undulating twill scarf? Well I just wasn’t thrilled with it; there was nothing particularly wrong with it, but nothing particularly right either. Since I’ve now decided that embellishments will be a part of my “brand”; I pulled it out and made it ripple. 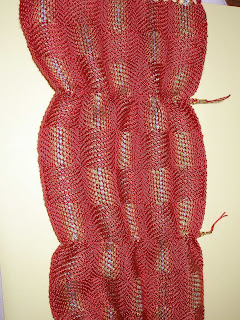 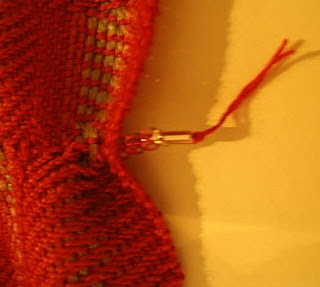 I inserted a doubled weft thread at intervals; I secured the first edge with 3 beads then wove through to the opposite side and anchored with another series of beads. I then drew on the thread to scrunch the scarf in from 6” to 4” wide. I’m calling this my Cayenne Ripple scarf now, and I think it has some real pizzazz! 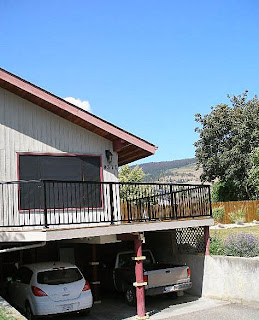 Michael, my hard working fella, has finished the front deck rails even though our days have been sweltering. He’s been out there in the full sun slogging away. Now that the railings are up we are ready to begin the next stage. See the round posts in the carport? They are getting cedar cladding on them to make them square as we are changing the whole style of the house from West Coast Contemporary to a Modified Craftsman. Who says’ we don’t have big plans! It’s going to take a while, but all things come to he who waits…as the adage goes.

Things I Know
Some cotton yarns can be very sticky and a twizzled fringes tend to bridge or stick together, choose another fringe treatment if possible or use beads to help keep them separate.
Posted by Lynnette at 4:53 PM

Could you please send some of your warmth to us up here? Here it is cold again (10 degrees!), so if we could get 10 degrees from you, everybody could have a temperate summer!
I love the echo weave, it is stunning. And what a creative idea to draw in the red scarf, you made it much more special by doing this.

Oh wow. I particularly like the first scarf. The colors and pattern together are spectacular!

I love the way you have made the two scarves both so different and yet both beautiful. I think the red one was nice before you tweaked it but you are right-it now has punch! (I am in the middle of renovations-1 yr now, and it can be brutal but so much promise!)

Oh my, we're baking down here too in Southern Oregon. My sympathies.
Love, love, love the Cayenne Scarf! What a clever idea and one I'm going to have to try.
Thank you for putting forth such beautiful weaving and such a nice blog.

Hallo!
I love your first scarf. It´s beatiful, the colors and pattern together very fine.
Birgitta

I sat here for a full minute trying to find the right adjectives to express how stunning the echo scarf is....I'll have to go with "simply beautiful"

The 'drawstring' is a great idea! That scarf was already gorgeous to begin with and now its unique.

The new deck and railing looks ssooo much better than the old ones. Such an improvement! Your hubby does nice work!

I can recall attending a funeral at Okeefe Ranch when it was 37 degrees. I thought for sure that there would be people passing out from the heat! It was brief and to the point :)

I think you can understand how the desire for a more moderate climate brought us here. It's a pleasant 23 to 25 today! ( We have the snow thing covered now with the Kub)

I really loved the undulating twill scarf before you embellised it. Well done for not putting up with what you perceive can be improved.

You are amazing!!! The echo weave scarves are so wonderful!!! You have actually inspired me so much that I've decided to take my current project to the 'next level' and made the tie up echo. I just love the grass green weft in yours!!! I know how sometimes cameras can loose the detail of a project so......if the camera isn't doing these justice....I can only imagine what they look like in person;) Thank you so much for the inspiration!!! Your blog is one of my absolute favorites!!!;)

Both of those scarves are so gorgeous! It makes me want to look at echo weave too!

I love the drawstring idea you came up with! I'll have to keep that in mind if my weaving nieces and I have trouble getting the scarf we weave at the beach to be flat and smooth. (I'm having weaving stage fright so to speak!)

Good luck with the home renovations - and we'd appreciate some of that heat in New England. I'm supposed to swim in the cold, cold ocean here in a few weeks, and I need it to be much warmer out for that!!

The scarves are gorgeous, great shots. And the house is really looking good!