It just dawned on me that I have never shown you my Echo #1 Scarf, so here it is on my Judy… 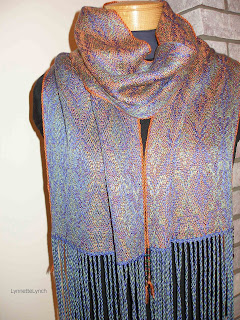 This is the weft dominant side or as someone called it the snakeskin side! The sheen is wonderful and very
iridescent. 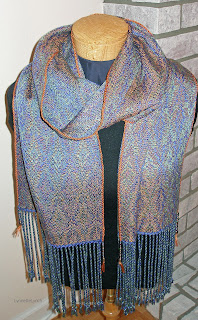 This is the warp dominant side and it appears to have a purpler cast even though it is blue and green. The pattern is completely different than the weft side and reminds me of brocade. I’m gob smacked with Echo Weave and the extended parallel treadling, although it was very slow going on a foot treadled loom. The weave method is really suited to dobby loom weaving with lots of shafts. 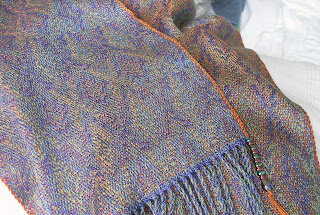 I have finished this scarf with a twisted cord down each side. I used the same burnt orange tencel as used in the weft to try and make the weft associated more with the overall scarf. I then beaded the cord with large glass iridescent beads in green and purple and cut it off shorter than the rest of the fringe to add interest. 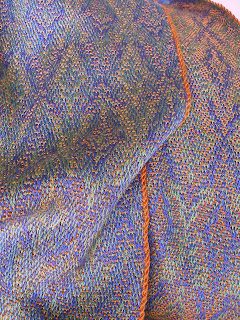 Here’s a quick look at both sides of the scarf beside each other – totally different! My camera just doesn’t do it justice; I can’t capture the glow at all… 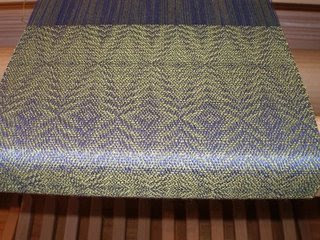 I have Echo #2 scarf – the lemongrass weft on my drying rack as we speak and it should be beaded and pressed tomorrow. The straight advancing twill is much easier to treadle, but doesn’t give the same enormous bang as the parallel treadling. So photos of the completed project will be featured in my next blog post. 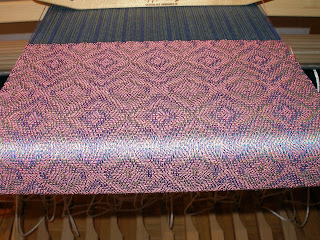 And here is Echo #3 on my loom. As you can see, the three of them are radically different from each other.....it's amazing to me! 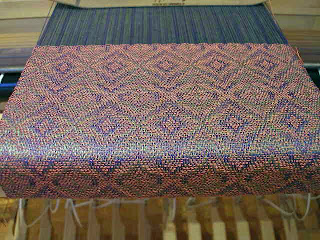 I have changed the weft from 2/8 Tencel to 2/20 Mercerized cotton in a mid range coral colour, a very brave choice for me. I have kept the same threading and tie up, but have changed the treadling to an extended point twill which is very similar in structure to Echo #1, but the pattern repeat has been reduced from 78 pick to a pattern to 64 picks to a pattern.

We are still in the midst of home renovations…we have added a number of new features to our deck plans, so it’s a slow painstaking affair. This evening we will go and pick up the deck railings and make a start at putting them up tomorrow. It’s really hard to enjoy the beautiful weather we are having when we work like little bees all summer.

This is really stunning, I have never seen anything like this, and echo #1 has a great lustre, even on the photo! And the pattern looks so complicated, I can imagine that treadling was a hard job.

You have worked several scarves of much beauty! The sheen does come across in the pictures.....the color interplay is such a delightful surprise!

That's beautiful. I definitely have to read up on echo weave so I can understand it better!!

Thanks for inspiring me!!

I was lucky enough to see and hold the first scarf in my hands!
Yes, its drop dead gorgeous and the pictures only hint at the complexity of colour and pattern.

I checked all the dresser drawers after you left and it didn't get left behind.... darn!

But I do have a lovely tea towel brightening up my kitchen. I had a weaver over today and it was the first thing she reached for... after pushing my towel out of the way! Geesh!

These are stunning. Do you hava book that you get your patterns from?