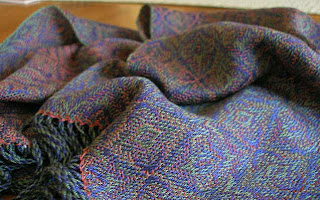 Tada……I’ve finally finished the Echo #3 scarf! This one was an easy weave, but it sat around unwashed and unfinished for yonks! Shame on me! 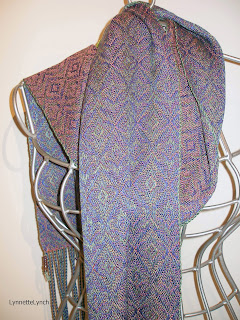 I used 2/20 mercerized cotton for the weft this time instead of 2/8 tencel there is an airiness to the scarf, while the other two, Echo #1 and #2 are quite slinky and rich feeling. 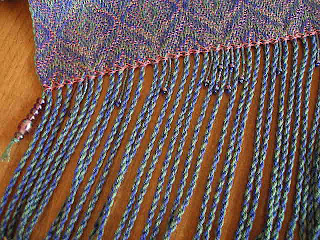 This scarf was finished this scarf with a cord edge in mineral green and then beaded lightly, only using beads every 4th bout, except in the middle where I had an odd number of bouts to work with. There is still that wonderful iridescence, I’m please to say. 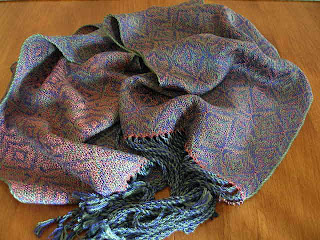 Echo #3 glows pink on one side and blue/green on the other. The pattern I chose to treadle reminds me of the shape of a Christmas ornament. Such a pretty scarf I think. 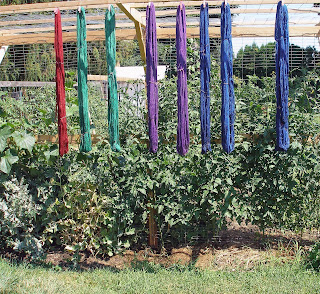 A group of my friends had an informal dye day last week and I took along 60 ounces of 2/8 bone coloured Alpaca to dye. I followed the rules and had my damp fibre weighed and measured; but group pots can be so unpredictable so unfortunately, they came out very spotty. So with the generosity of my friend Louise, who gave me some of her dyes I had another dye day and was able to control the dye/fiber ratio much better and thankfully got these lovely skeins to show for it! One of the neatest ideas that came out of the dye day was the way we had lunch. Our hostess had each of us bring one sandwich, any type cut into four pieces and a piece of fruit that was cut into bite size pieces. The fruit went into a fruit salad base that she had prepared and was just amazing. The sandwiches were plated up and were so lovely – I think this is a great idea and it was wonderful to share. 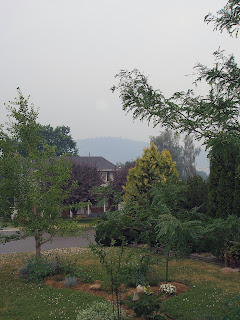 The fire on Terrace Mountain near me is finally 60% contained and the winds have been blowing the other way for a few days now. We still get the occasional whiff of smoke, but are much clearer today. 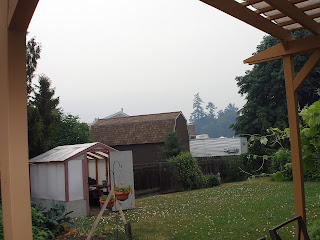 I took these photos on July 26 at the worst of the smoke, the hills my neighborhood are pretty much hidden, usually they are very visible from the back deck, the hill is only about 1 km away! It was a very scary time and we had our important papers and photos ready to go at a moments notice. We’ve also had a major weather front pass through a few days ago with monsoon-like rain, hail the size of golf balls and winds that were amazing…..What a summer so far! We have constantly had 37+C days and nights that cool down to about 20+C. We have also had much more humidity than normal, so only the garden is enjoying it! I feel wilted most of the time! 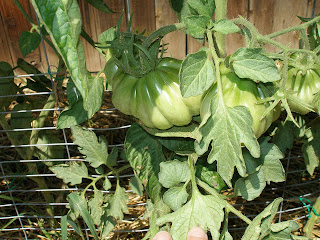 What I find amazing is that my Zapatec tomato is doing wonderfully….we have already started eating other varieties. 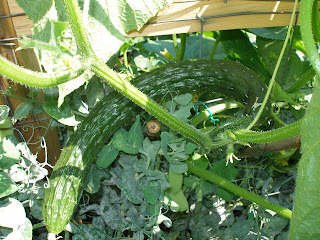 The Japanese cucumbers are soooooooo productive that all my friends and family are reaping the benefits too. I also grew an heirloom variety of French filet bean and picked 139 beans off one plant. So the summer to date has been eventful to say the least.
Posted by Lynnette at 5:17 PM

Lynnette, what do you mean by a "cord edge"? Is that something made/crocheted/?? separately & attached or somehow woven in or what?

Hi Kathy,
When your weft is radically different from your warp as it is in these Echo scarves, the weft turns really show up. In the case of the Echo weaves the weft turns are staggered at the selvedges too. So I took 2 bouts of the warp threads and twisted them 700 turns to the right and 460 to the left and then sewed it to the selvedges. This seems to tie the weft threads to the warp with a band of colour. If I had only been doing 1 scarf I would have put a small band of the weft colour in the warp at the edges.

The scarf is beyond beautiful! The garden is amazing, too!

The scarf is simply extraordinary! I'm glad the fires are now more contained, it looks really scary to me. The vegetables look yummy, here we are starting to get the first strawberries.

I'm definitely going to try echo weave! The jewel colours are lovely. If these scarves go into a sale, they'll be snapped up in a heartbeat!

Your garden looks wonderful! I can taste the tomatoes from here.

We seem to have a bit of relief from the heat today (less hot), now all we need is some rain!

Your scarf is more than beautiful!!!

Love the lunch idea. Amazing what people think of.

I don't know why we didn't plant any veggies this spring but we sure do miss them and looking and reading about your yummy ones sure doesn't help. They look great!!

I'm sure glad the fire near you is somewhat contained. Must be so scarey.